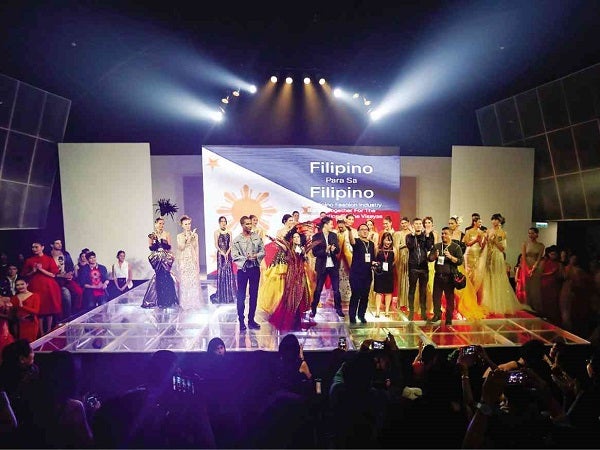 AT END of the show, organizers thank the crowd that filled the Samsung Hall at SM Aura. PJ ENRIQUEZ

The community truly banded together, but this effort is not unique–it’s happening everywhere in the Philippines

Now for some time out from bad news.

This was added to the P809,750 raised during the show, “Filipino Para sa Filipino,” from donations and pledges at the entrance of the Samsung Hall of SM Aura.

The industry banded together to help in the rehabilitation of the Visayas in the aftermath of supertyphoon “Yolanda.” This is through Tabang Visayas.

Virgie Ramos, who built Swatch into an institution brand in the Philippines, gave the donation to round out the fund.

“Tita Virgie,” as she is called affectionately by friends, didn’t make it to the Nov. 29 fashion fundraiser because she had to fly to Tokyo to attend the funeral of a longtime friend, Kunihiko Tsuji, the scion of Sanrio. Tsuji died suddenly after an acute heart failure. He was only 62. (See related story on page H1.)

The fashion fundraiser was mounted by more than 100 designers, models, directors, hair and makeup artists, technical suppliers. All gave their free services.

Rise to the challenge

While this was the biggest gathering of Filipino designers for a show in recent years, this industry effort to rise to the challenge of helping rebuild the Visayas is not unique.

It is replicated in virtually every corner of the Philippines, across social classes, ages and affiliations. In groups or as individuals, Filipinos joined relief operations, and are now finding ways to help rebuild communities and lives.

In truth, that mammoth event had no formal organization, structure or planning.

That Monday after Yolanda struck and the extent of the destruction was beginning to unfold, I started receiving text messages from designers such as Randy Ortiz and Efren Ocampo, and from fashion director Jackie Aquino, that perhaps we should stage a big fundraiser. Knowing only too well the logistics required to stage a fashion show, I couldn’t commit readily.

That same week, as if to prove how intent they were, Jackie, Randy, JC Buendia, Edgar San Diego set a meeting with us in the Inquirer office to discuss the big fashion show where almost all designers would join. JC and Edgar committed the participation of all the members of their respective organizations—the Fashion Design Council of the Philippines and the Fashion Designers Association of the Philippines (FDAP).

Also with the group was SM Men’s Fashion’s Ayen Florendo. SM executive Millie Dizon tacitly committed the venue—Samsung Hall at SM Aura, which could accommodate close to a thousand. (Apart from the venue use, SM also donated P100,000 during the fashion show.)

By the second meeting, Millie was already firmer with SM’s support and Jackie had brought in fellow director Robby Carmona. Jackie had also secured the participation of the country’s top retailers, Rustan’s and SSI, and Robinsons. This was followed by the Bench Group, the Ramp and our friend Ronald Pineda’s Folded & Hung. Even FDAP’s Oskar Peralta attended along with JC, Randy.

Jackie and Robby also announced that their technical suppliers, from the stage to the lighting and sound, would give everything for free.

It was at that meeting that I saw JC beside me designing on his iPad a slide for the show which he was calling “Filipino Para sa Filipino.”

So that was how we all decided what to call the show.

Everything just fell into place, in one fluid motion, without structure or strict planning. Everyone just tried to do his or her part.

By the third meeting, Amina Aranaz and Malou Romero were already committing the works of the accessories designers to be auctioned off on the night of the fashion show, to raise more funds.

All it took was a phone call to get Inno Sotto, Pepito Albert, Cesar Gaupo and Auggie Cordero to join.

This was to be one project where rivalries or private affiliations would be set aside.

Coordination would be done as if instinctively.

With the support of Inquirer president and CEO Sandy Romualdez, Inquirer agreed to handle the cashiering operations of the event, and SM, the security and staff in the venue.

Jollibee, through Francis Flores, offered meals for the technical crew on the day of the event.

Binibining Pilipinas Charities, through its chair Stella Marquez-Araneta, granted our request to have the titleholders model.

And in a rare social appearance, Madame Araneta went to the show herself and met up with Inquirer chair Marixi R. Prieto.

With the beauty queens, she even hung out with us after the show. I found these women to be fun, so cool and beautiful inside out, no airs at all—Miss Universe third runner-up Ariella Arida, Bb. Pilipinas-International Bea Santiago, Bb. Pilipinas first runner-up Pia Wurtzbach.

The demands of the beauty crown on their time didn’t seem to faze them at all. They had a 2 a.m. flight to Capiz that night after the show.

The tragedy that was Yolanda brought out the good side of the Filipino. Not only is he/she resilient, the Filipino also has inner faith and grace.

Is the country now into charity? Our colleague Vergel Santos loves to correct that. It is not charity or philanthropy, he said. It is called “giving back.”