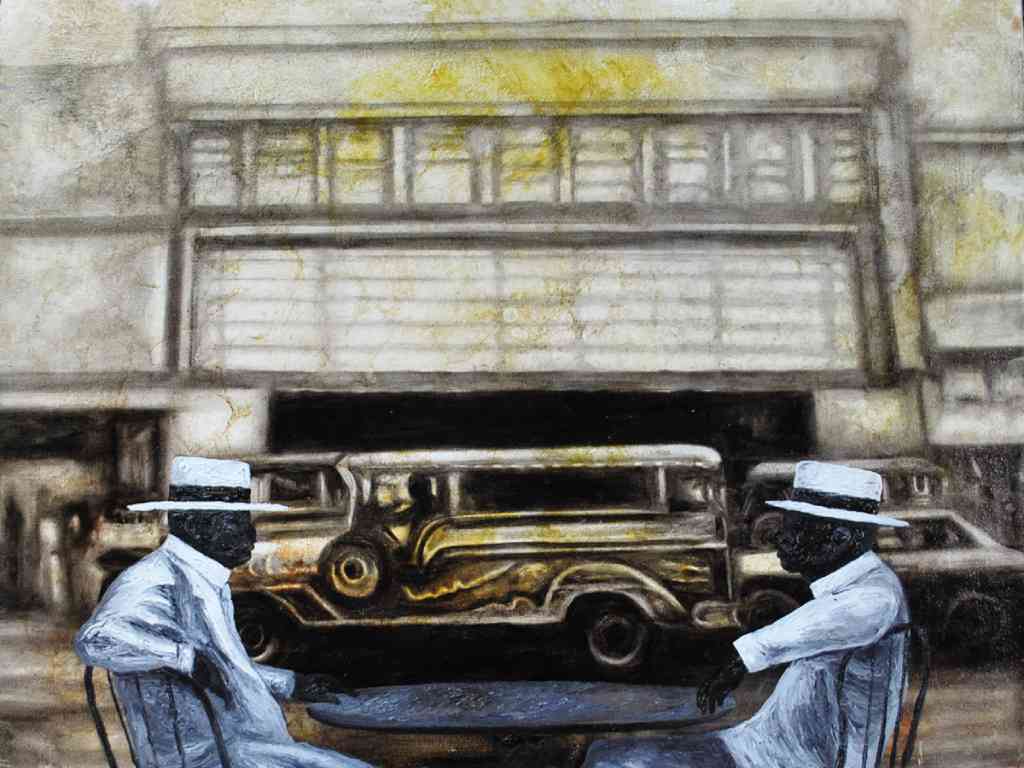 For his past couple of shows, Vincent Paul Padilla has been propelled by his interest in the dynamics between photography and painting—and, more significantly, their revelations about the nature of time. Undoubtedly, the iconic painting that ignited the concept is the surrealist painting titled “The Persistence of Time” by Salvador Dali. (It is commonly referred to as “The Melting Clock.”) That work, however, did not advert to the stimulus of photography.

Closer to home, it was National Artist BenCab who, with his landmark 1972 “Larawan” series, opened the eyes of the public to the visual wonders of colonial, turn-of-the-century photographs. “Larawan” stirred the interest of other local artists with consequences not always beneficial, with works often stopping short at a strained, unfelt nostalgia.

Aware of the pitfalls of this artistic plunder, Padilla brought his concept to another realm and regarded old photographs, themselves already emblems of the passage of time, as frozen images that can be “thawed” to become his own versions of “the melted watch.”

Furthermore, Padilla enlivened and deepened his subject with the incorporation of  written passages on the nature of time. These are inscribed in a reverse flow. Thus, the present act of reading can be interpreted as a journey back into time. The artist extends the reach of significations of a photograph (created in a split-second flash), now reconstructed as a painting, laboriously wrought but suppressing the torment of its execution. The enterprise is a mimetic act, appropriating not just image, but time itself.

In stop-time fashion, viewers at Galerie Anna, as though encased in a time machine bubble, proceeded to dissect the works.

In “To Do One Must First Imagine,” the subject is that other great 19th-century painter aside from Luna: the reclusive and retiring Felix Resurreccion Hidalgo. José Rizal extolled: “…in the painting of Hidalgo throbs the purest of sentiment, an idealized expression of melancholy, of beauty and weakness victimized by brute force. Hidalgo is all light, color, harmony, feeling, limpidness like the Philippines in her calm moonlit nights, in her serene days with her horizons inviting contemplation.” Hidalgo—whose maternal surname also happens to be Padilla—is photographed inside his Paris studio, his visage reflecting a ruminative moment. Separated from his country of birth not only by physical distance but by vast expanse of time—he had not visited his country for 30 years—Hidalgo was given to contemplation. In this instance, it was a reversal in time, a return to his favored themes derived from the ancient Greco-Roman times as expostulated in his winning works “Christian Virgins Exposed to the Populace” and “La Barca de Aqueronte.”

In “Conversation,”  two ilustrado gentlemen, clad in the starch white suit of the era, their posture indicative of upright breeding, conduct a colloquy across a table. Curiously, the pair are superimposed against a typical Manila street scene. In the background is a careening jeepney, a cobbled-up vehicle right after World War II. This rupture of time provides a surreal transposition of one era onto another, effectively blurring the distinction between past and present. The fact that the painting was done in 2013 adds another layer in the transparency of time. In effect, Padilla has created a hologram of light and presence, image and illusion, memory and mobility.

“Time Passes in a Moment”  alludes to time standing still, as exemplified, or personified, by a turn-of-the-century gentleman standing still, seemingly immobilized, intriguingly like a ghostly presence. The title is obviously a forewarning of man’s mortality, that every human being on earth will one day cease to be. No one is immune from the vulnerability of the human body, into which obsolescence is built. But even as death takes hold of man, a photograph of him becomes symbolic of his “immortality.”

“Rat Race,” a comparison between a two-wheeled carabao cart and a unicycle, summons hilarity: the sight of a gentleman propelling the pedal and the farmer railing at the slow-paced beast of burden. Both are comedic figures like the surrealist encounter between a sewing machine and an umbrella. Since speed is the very essence of a race, a collision of tension occurs, generated by time being wasted. The photograph chosen, or contrived, by the artist, is itself social documentation.

“See Things as They Could Be” presents Old Manila.

The mind as an instrument of visualization of the future is a camera that bids a vision to occur and manifest itself in reality. As the advertising for Yashica camera instructs: “Just aim, focus and shoot. The computer brain and electronic shutter will do the rest.”

Thus, a view of Old Manila, with its distinct architecture and vehicles, long since destroyed by war and time, may have vanished from existence, but it has been projected into the reality that contemporary Manilans now experience. A casualty of time has risen from the ashes. In its place, we now see high-rise condominiums and skyscrapers.

Alas, the great physicist Albert Einstein, who should know, claimed time to be nothing but an illusion.