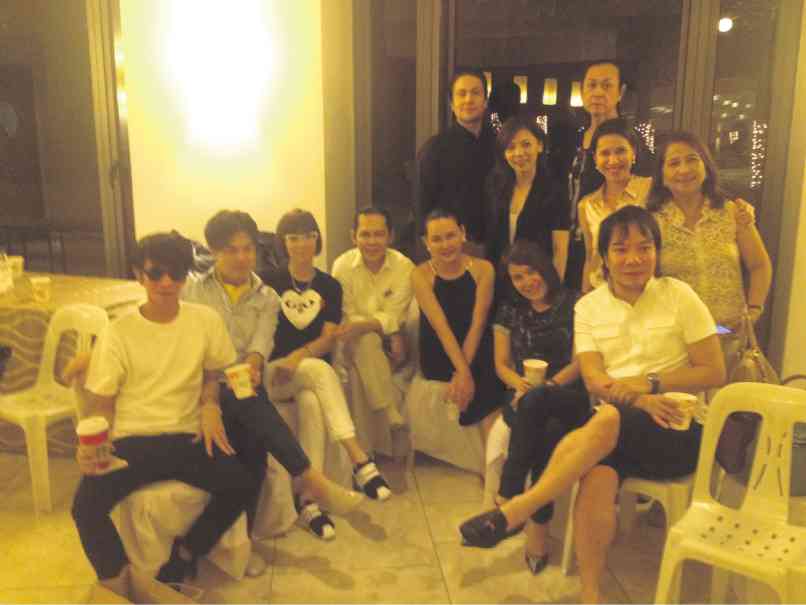 When beautiful things bring relief–Kaye and company did it again

“There are hundreds of shoes on the floor and bags on all the couches, people laughing and talking, and a little girl with light-up shoes inside a box! What is going on here?” 16-year-old Kerry Tiñga asked in mock shock as she entered what was once the immaculate den of her family home.

Everyone burst out laughing  and resumed the loud, cheerful banter.

We were there to work that night, but never had work been so much fun as we sorted out, cleaned and priced boxes and bags filled to the brim with shoes and bags.

These weren’t just any shoes and bags, but big-ticket luxury brands generously donated by friends and family to raise funds for the relief of Supertyphoon “Yolanda” victims.

My dear friend Kaye Tiñga has always been known as one of Manila’s most fashionable ladies. Knowing how many beautiful things she has acquired over the years, those close to her have asked her many times to mount a garage sale, but she said: “I never really wanted to part with things I’ve owned, unless it would be for a very good cause.

“When Typhoon Yolanda happened, I was talking to my husband Freddie and mentioned that a garage sale would be a good way to raise funds for the victims, and he encouraged me to call friends and to do it as a community effort.”

And so the calls were made and enthusiastically answered by Kaye’s business partner at W17 (her home furnishing store), Andy Vazquez Prada, and good friends Pepito Albert, Inno Sotto, Patrick Rosas, Ian Giron, Ariel Lozada, myself and my mom, Dette Tan.

I didn’t have to think when Kaye called on Monday, Nov. 11. Having worked closely with her on previous fundraising projects, I’ve always known that, more than her taste in all things beautiful, it is her generous nature that makes her stand out. I’ve also seen up close how tireless a worker she is, and how she sees things through to the end.

A date was set for Nov. 17 at W17. Everyone moved quickly. We started a phone brigade, and friends called other friends, and it was, as Kaye says, “an amazing chain reaction of charity that happened.”

Still, everyone was nervous. Would there be enough shoes and bags and would they be to the buyers’ liking? We had decided against selling clothes due to the difficulty of having to sell both an item and its “fit.”

In contrast, luxury branded shoes and bags would serve as an enticing invitation and would be easier to sell, since bags have no size and shoes are easier to try on.

As the week passed, the generosity of friends and family overwhelmed us as they sent in their pre-loved items, while some even offered brand-new goodies.

The next question was, where would we get buyers?

But social media worked its magic. We posted and shared the details on Instagram (IG) and Facebook nonstop, with the Inquirer’s Sea Princess, Tessa Prieto-Valdes, promoting the sale to her over 30,000 followers on IG and countless more on Twitter.

We lined the shoes up by a wall and the bags on the tables, but it really is different when you have an artist with you! When Pepito Albert arrived, he took over and rearranged everything and, before you knew it, he had tastefully set them up all around.

We rushed everything in time for the 11 a.m. opening. We took it as a good sign when the first customer knocked at 9:30 a.m. and asked if she could come in already.

As the day progressed, the shoppers came—many of whom we were meeting for the first time, with some asking about items they had seen on IG, and even buying over the phone, all the way from Bacolod!

The day was not over yet and people were already asking if there would be a part 2.

As the sale ended, Fila’s Cris Albert came, only to find that everything she had seen on social media was gone. So, she did the next best thing: pakyaw (buy out) all the leftover items, effectively making the Relief Sale of over 100 bags and 150 pairs of shoes sold out!

Shouts erupted when it was announced that the sale generated a grand total of P1.5 million—all of it going to the Philippine Red Cross’ relief operations.

“I was overjoyed, not just from the funds we were able to raise, which was way over what we expected, but also from being able to work together for an important cause,” said Kaye. “There was quite a lot of work involved—curating and cataloguing the items, marketing the sale, selling the items on the floor—but everyone was happy doing it and the results surely reflected this.”

Everyone was so inspired that, right there and then, we decided to have Relief Sale 2.0 on Dec. 1. For the second sale, we were lucky to have the support of other generous friends such as Century Property founder, Ambassador Joey Antonio, who lent us a function room at Essensa Towers in Bonifacio Global City for the sale’s venue.

However, a week before the date, we were still a little short on items to sell, until LBC’s Connie Araneta sent over a box with 20 bags, all in great shape, to support our sale.

And so it was that Kerry found us all spending our Saturday night in Kaye’s den, chatting and cleaning while enjoying the company of friends such as Ria Prieto.

During the first sale, we discovered that Ria is a born saleswoman, as she phoned friends to tell them that they had just bought this item or that she would collect their checks within the week!

Of course, our stomachs were also happy that chef Florabel Co-Yatco visited, bringing her delicious adobo with chestnuts for dinner which my daughter Adriana (the little girl playing in the box) happily devoured, while Angelina had hot chocolate, pan de pugon and homemade cheese pimiento for midnight snacks!

The next day, at Essensa,  shoppers lined up as early as 10 a.m. We are also thankful to our friend, dermatologist Aivee Teo, for her pakyaw purchase of the last remaining items and for allowing us to, once again, declare “sold out!”

This time, it was to the tune of P1.2 million, which will all be donated to the Philippine Red Cross again.