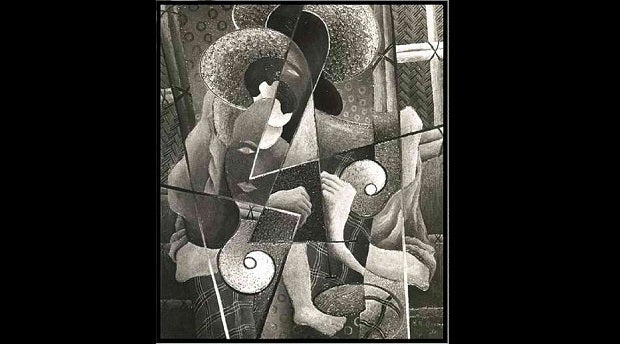 CULTURAL TREASURE “Ina at Anak” is the oil painting by National Artist Hernando R. Ocampo that, according to the heirs of Abelardo and Trinidad Tarrosa Subido, had been stolen from their family and resold in the “unregulated secondary art market.” CONTRIBUTED PHOTO

The heirs of poets and writers Abelardo and Trinidad Tarrosa Subido are calling for the creation of an art loss registry to curb the illicit trade in art and cultural property that, they said, was behind the “unauthorized sale” of an artwork stolen from their family, a painting by Filipino National Artist Hernando R. Ocampo.

“There is an urgent need for an art loss registry where parties could immediately raise the flag on their stolen cultural properties and deter their unauthorized sale,” according to Subido siblings Benjamin, Corazon, Cesar, Maya, Kristina and Maria Paz.

In a letter sent to National Commission for Culture and the Arts (NCCA) chair Felipe de Leon Jr., the Subido heirs said that an online database, run by a trustworthy and impartial office, may also be an effective means to recover lost and stolen cultural property.

According to the siblings, Ocampo’s 1951 oil painting, “Ina at Anak,”  which their late parents had owned and which they discovered in 1997 to have been stolen, turned up in the exhibition “The Real H.R. Ocampo from the Paulino and Hetty Que Collection” mounted by the Ayala Museum in June this year.

The Subido heirs said they had felt the need to bring the matter to the NCCA’s attention since the painting in question is by a national artist and is therefore considered an important cultural property.

“Our case brings to light improper procedures on the part of art dealers, aspects of the antifencing law unfavorable to legitimate owners, and the general disregard for ethics in the [collection] and exhibition of artworks,” the family said.

The siblings added that the NCCA-sponsored National Artists Award had become “an important driver in the secondary art market” since “the prestige … magnifies interest in spurring thefts, unauthorized sales and illegal transactions in the name of acquiring ‘culture.’”

The Subidos claimed that  their parents, who were incorporators of the Philippine Art Gallery (PAG), the country’s first gallery devoted to modern art, had acquired the Ocampo painting during an in-house raffle of the PAG in 1951 and that the General Catalogue published by the gallery in 1958 lists Abelardo Subido, as the owner of the work.

The elder Subidos, who both served as literary editors of the University of the Philippines’ campus paper, the Philippine Collegian, published The Manila Post after World War II and a book of their love poems, “Two Voices,” in 1945.  Abelardo died in 1979, Trinidad in 1994.

The Subido siblings said the family discovered that the Ocampo painting was missing in 1997 and surmised that it must have been stolen while their house was undergoing repairs.

They recalled that they had tried inquiring with the NCCA about the possibility of setting up an art loss registry, but that the database never materialized.  They then resorted to announcing the theft during an exhibit on the life of their parents held in January 2003 at the NCCA office in Intramuros, Manila.

But it was only last June 19 that the family learned, through press releases by the Ayala Museum, that the painting had ended up with art collector Que.

Requests for a meeting with the collector were ignored by the Museum, the Subidos said in their letter to De Leon.

“How did it end up with the Ques if none of us children ever sold the painting to them or to anyone else? Whenever any action needs to be taken involving property we inherited from our parents, we make sure to get the opinions of all the heirs and that all our decisions are unanimous. We neither agreed to nor even knew of the sale [of the artwork] to Que,” the Subido children said.

“Mr. Que may have bought the painting in good faith … [but] it would be to his advantage … to take a proactive part in rooting out this evil in the art community,” the family said, adding that should the painting be returned, they would allow the National Museum to take possession of it “for the enjoyment of ordinary Filipinos.”

Apart from the art loss registry, the Subido heirs also suggested that the 10-year prescription period for qualified theft, counting from the time the theft was discovered, should not be applied to important cultural property.

“Thieves, fences and other parties benefiting from stolen property can just sit on objects until the legal toll runs out, earning from the appreciating value of the objects while making it exponentially harder for the rightful owners to recover their properties,” they explained.

Among other suggestions, they also urged the NCCA to require proper documentation, such as proof of ownership and authorization to sell, from sellers of cultural property especially in the secondary art market.  They urged the cultural agency to likewise “articulate and implement a code of ethics that also includes the loan and display of artworks with conflicting claims of ownership.”

“Once made aware of the conflict, the fair thing for the museum or gallery to do is to remove the offending artwork from view,” the siblings said.

Sought for comment, NCCA legal consultant lawyer Trixie Angeles said they would be willing to seriously consider the suggestions raised by the Subidos, particularly the creation of an art loss registry. “We can put it in our legislative agenda, ask for a new law … [or one] transferring the law enforcement mandate of the National Museum to the NCCA,” Angeles told the Inquirer in an interview.

But when it comes to the ownership of the Ocampo painting, the lawyer said it would be best for the claimants to seek legal action.

“The NCCA’s mandate is to protect [cultural works] for purposes of national patrimony, meaning we keep the works from getting out of the country or from being irrevocably destroyed. But when it is a claim between two parties, this is more for the courts to determine,” she said, adding that the claimants “must show proof of ownership.”

“I’m sure [the family has] pictures of [the painting] hanging in their house, receipts or acknowledgment by the author that they bought it,” Angeles said. “It’s the courts that can determine who has the better right to it, not the cultural agencies,” she added.

Angeles said that while the NCCA could mediate between the two parties, it couldn’t compel Que to speak or explain how he acquired the Ocampo painting. “But we can take the initiative [to talk to Que] if requested by the party that claims ownership,” she added.

The Inquirer tried to contact Que through the Ayala Museum but Tenten Mina, the museum’s collections associate manager, said their policy was not to give out the contact information of their lenders. On the exhibition of the alleged stolen artwork, Mina said she would refer the matter to the museum curator, Kenneth Esguerra, who, as of Friday afternoon, was in a meeting.

In an interview with Inquirer Lifestyle, an insider said the painting’s purchase from a legitimate art dealer was fully receipted  and even came with a certification of authenticity signed by National Artist Arturo Luz and defined provenance traced to the Subido family.” With a report from Inquirer Research

CCTV bares all: Art theft on the rise