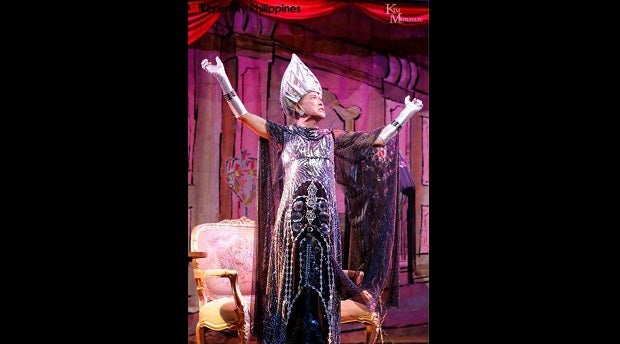 ME IN my fully-beaded “Chrysler Building” gown and headdress, plus killer heels, as director Roger de Bris in Repertory Philippines’ “The Producers”

Hey, it ain’t easy being gay

To paraphrase “Sesame Street’s” Kermit the Frog: “It’s not easy being ‘gay.’” I learned this lesson when I accepted a gay role for Repertory Philippines’ production of “The Producers.”

The offer came from director Jaime del Mundo at a time when I was burnt out playing Ser Chief’s father in the phenomenal TV show “Be Careful With My Heart.” I wanted to do something else, preferably as far away as possible from my TV role as an American-bred Chinese businessman.

I figured a gay director certainly fit the bill. I have played all sorts of roles on television and in the movies—from a priest to a crooked politician to a mafia-like don to a war veteran—and I thought that a gay character would certainly be a challenge. Was it ever!

To make my life even more complicated, I couldn’t rehearse with the rest of the cast until I finished my commitment to my TV show. That’s why veteran stage actor Audie Gemora had to pinch-hit for me for the first weekend run. (He enjoyed himself so much that he and his friends bought one night’s performance so that he could play the gay role at least one more time.)

Unlike in Audie’s case, playing gay didn’t come naturally to me. I had to work hard at it. I had to overcome my basic instinct to reject the swishing hips and the limp wrists. My 72-year-old body didn’t have the innate grace that gays seem to have in their DNA.

Aside from the heavy, fully-beaded long gown I had to wear in one scene, there were three areas that I especially found the most difficult to overcome.

The most complicated suggestion came from G Toengi, who said I should not only thrust my hips forward when I walk, but also make a figure 8 as I step forward. I figured that’s terrific—but you have to be a G Toengi to pull that off.

I guess the least complicated advice came from our choreographer, who told me to just drop my hips in a lazy way as I move forward step by step. And that’s what I adapted. I thought I did reasonably well in practice using ordinary shoes and I felt good about myself, not realizing that I was being optimistic too soon.

Which brings me to the next difficulty—the high-heeled shoes. With this new added element, the swaying became more of a concern because I had to make sure I didn’t break an ankle with a wrong step.

Besides which, the shoes hurt. It didn’t help that the ones I was provided with were too tight at the toe area and too loose at the heel area. I used different devices to solve the problem (heel liners, bunion protectors, duco plasters, tissues, etc.) but they didn’t help much. So eventually I just had to deal with the pain.

And then the third problem: After several rehearsals, I thought I was ready for my “coming-out party.” And with my first appearance before an audience, I was feeling pretty proud of myself. That was quickly dashed by a comment from a director friend who told me after the show that I got the whole gay thing down pat—but only from the waist up. I was still male from the waist down!

It had to do with my stance when I’m not walking. I was totally unaware that gays stood at rest differently from guys. So back to the drawing board.

To make a long story short, I felt more comfortable in my succeeding performances. I finally got everything working reasonably well. But was it enough? Did I pull it off? Did I successfully meet the challenge I hurled at myself?

Thankfully the answer came back soon after. During one performance, a friend of mine heard someone in the audience turn to his wife and whisper, “Is it possible that Noel has been hiding in the closet all his 72 years?”

I guess even Kermit the Frog would be pleased.