What do Dr. Elenita Binay and Cristina Enrile have in common? | Inquirer Lifestyle ❮ ❯ 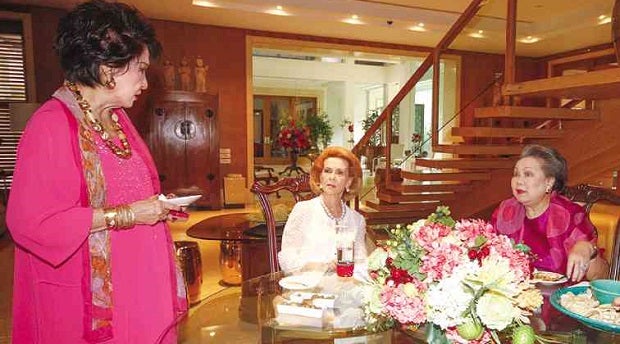 What do Dr. Elenita Binay and Cristina Enrile have in common?

What a pity that after the storm surge came the sabong (cockfight) between Interior Secretary Mar Roxas and Tacloban City Mayor Alfred Romualdez.

But the accusations they hurled at each other shouldn’t mar the fact that both nearly died during the storm surge, Romualdez with his family (in another part of the city) and Roxas with Defense Secretary Voltaire Gazmin and their staff. These two are opponents in the political arena but actually share what could have been a tragic end. What an irony.

“Yolanda” the disaster yielded a lot of “should haves,” and Filipinos are great experts at “should haves.” To this fencesitter, what was so notable was the noise, the confusion, the misinformation that social media (Facebook and Twitter) created and propagated. The abuse of social media was nowhere more evident than in the aftermath of Yolanda.

Yet no one—not the country’s leaders, not mainstream media—could ignore the anaconda-like social media.

This year-end experience drove home the importance of communication and messaging, more so in this era of lightning-quick technology and visual communication. Whoever directs the conversation, so to speak, prevails, and wins the battle for the hearts and minds of the people.

It also drove home the image and the story—for all the world to know, we hope—that the Filipino moved heaven and earth to help his/her fellowman who suffered in this disaster. Men and women, rich and poor, young and old—every one tried to do his bit.

Even the stylista set (Kaye Tiñga and company) sold its designer shoes and bags to raise millions of pesos in a day.

A portion of the P1 million that the fashion design industry raised during the fashion show “Filipino Para sa Filipino” will go to the San Roque barangay of Tolosa, Leyte, which needs, among other things, mosquito nets and banig (woven mat) for 1,300 households—nothing earthshaking but very basic nonetheless, to protect the homeless from the elements. It will also be used to provide the community with hammers, nails and flashlights.

Everybody tried to do what is doable and within one’s means. Lifestyle Super’s Kindness Chronicles continues.

It is with this awareness of the Filipino’s good heart, courage and faith that we will end the year, for the world to know.

Both don’t dwell on the news. Over lunch two weeks ago, I asked Dr. Binay and Ms Enrile if the headlines affected them.

Both just shrugged, and made facial expressions that said they stayed away from headlines. They didn’t have to say a word; their body language said it all.

So that’s how they survive—they don’t digest the news. Few wives in the country have been in the eye of the storm the way these two have been, especially Ms Enrile.

Yet, there they were at the intimate lunch hosted by Mely Hechanova, looking fresh and blooming. Ms Enrile, particularly, was highly spirited. (Or should I say, triumphant.)

Dr. Binay had just come from the Salcedo market. I discovered at that lunch that these two women still do the regular market/supermarket chores for their households, like traditional wives and mothers.

Dr. Binay goes to market at least once a week. She also looks after the brood of her widower son, Junjun, the Makati mayor.

Cristina goes to the supermarket every 10th or 11th of the month to buy stuff for her household and that of the Senate President.

Perhaps that’s how they cope—“supermarket therapy.” The two women may be very traditional, their coping mechanism just as traditional, but their survival record is way above the traditional and standard. They have survived the storm surges of politics.

Also at the lunch were Nene Leonor and her sister Fe Rodriguez. I didn’t know until then that they came from the old Santos clan of Quiapo and have good memories of old Manila. Others present included Nini Licaros, Consul Fortune Ledesma, Consul Agnes Huibonhoa, Chit Salud, Juliet Romualdez, and another steely survivor, Susie Madrigal-Bayot who has dropped her married name, Ortigas.

That lunch, typical of Mely Hechanova lunches, consisted of many courses, all of them not for the faint-hearted and the vegetarian. I was impressed that the women didn’t watch their calories or cholesterol—not with the spare ribs, or the pochero.

The meal was capped by desserts arrayed like a buffet, from the pudding to the fruitcake to Baby Yulo’s famous strawberry shortcake.

Used to “it” girls who just stare at the food on the table, and then order tea, I found this lunch a refreshing change.

Don’t let the holiday season pass without checking out the redesigned Home section of Rustan’s Makati.

The fine selection of merchandise was done by Rustan’s president Nedy Tantoco herself.

The superbly handcrafted porcelain, ceramic and glasswares from Italy, Germany,  France and Czechoslovakia not only make special gifts, they are also “Instagrammable.”

An interesting example of Principe porcelain art is a figurine of a 19th-century woman in a ballgown, her pouf skirt an intricate layering of lace.

Over at L’Indochine at SM Aura are good finds from Tibet, such as a small handcrafted chest, and gold insect accessories—dragonfly, beetle, bugs as cuffs, pendants, brooches, pins.

Bugs are a big trend, said Charlene Carlos, a tennis buddy who helped put up this store of ethnic finds. Charlene travels to as far as India to source her merchandise.