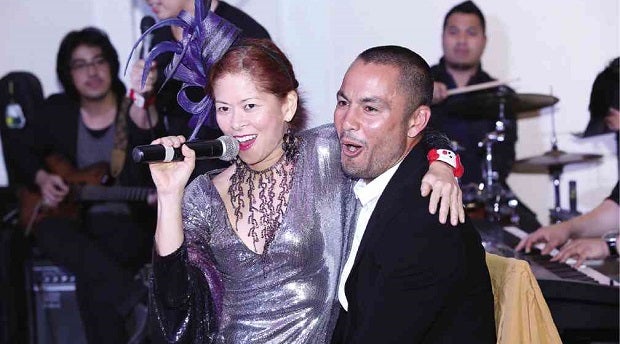 Swatch is beyond just telling time. It is a fashion item, for sure, but one that also incorporates caring and kindness for humanity.

Among the many charities it supports is the annual Red Charity Gala, and over the years, Swatch grand dame Virgie S. Ramos has always made it a point to add to the fun by giving back. Yes, as corny as it sounds, VSR is heavily into CSR.

At this year’s intimate Christmas dinner at Tita Virgie’s home, the theme of the decor was music. The tree was decked with musical instruments inspired by the idea that if everyone played their part right, we could all be in harmony land.

Gino Gonzales’ gorgeous giant Christmas tree setting was a favorite photo spot for all the guests. The entire room set the Christmas spirit ablaze, as a scrumptious dinner prepared by Chef Gilbert of Kai delighted all our tummies!

In my next life, I want to be able to throw a party like VSR! The gathering couldn’t help but turn into a mini-concert with Martin Nievera making music, accompanied by Marvin Querido and his band singing “It’s the Most Wonderful Time of the Year.”

Christian Bautista, Matteo Guidicelli and Billy Crawford all had their own turns at the mic, as well as the awesome Vice Ganda and forever Swatch lady Mikee Cojuangco.

My new favorite VSR guest has to be Julia Abueva, though. Together we did the classic “Endless Love,” with me lip-synching while she did all the singing. Julia is one of the actresses who will play the lead role of Kim in London’s West End Revival of “Miss Saigon” starting May 2014. My dear friend Carlo Orosa, with whom I also did a duet that night, never heard me sound so good!

There were so many reasons to celebrate. The yummy dessert table was a delightful spread! Special cakes were made for Alvin Patrimonio and Direk Rowell Santiago. Newlyweds Chris and Clarisse Tiu, Mikee Cojuangco­Jaworski, and Martin Nievera all had wonderful, individually themed cakes. A Best Actor Award cake was designed for Matteo.

The Swatch family also presented Julia a two-layer fondant cake with Cinderella theme. Direk Rowell Santiago then showed a video with pictures of Julia going way back to when she was a little girl whom Tita Virgie used to shower with Hello Kitty goodies, to today with Julia’s wish of making it to the West End about to come true.

Tita Virgie’s Christmas giveaway for the night was the limited-edition Kenneth Cobonpue tea lamp set called “First Light,” which is a project of the Habitat Youth Council. You can pick up this limited-edition set at all Swatch Shops in Manila. Proceeds will be used to rebuild the homes of the families affected by Supertyphoon “Yolanda.”

From Swatch, I move on to my youngest daughter Athena’s world. We recently watched the ongoing “Barbie Live!” at SM Arena. The all-new musical production features contemporary music with empowering lyrics, energetic choreography and a modern story line appealing to fans of all ages.

“Barbie Live!” debuted last September in Singapore and today is the last day to catch it at SM Mall of Asia Arena. The show features glamorous costumes, spectacular lighting and set designs, and a cast of 19 singers and dancers. The show is promoted by Vivre Fort Entertainment and Happy Junior Productions. Tickets are available at www.smtickets.com.

I owe a big “thank you” to Myrna Yao, owner of Barbie Philippines, who sent me the tickets. Myrna is also a generous supporter of the Red Charity Gala. At the show, we sat alongside fellow Samsung ambassador Daphne Paez and her daughters.

Endorsing a product is a great way to learn more about it. In the case of Magnolia All-Purpose Cream, I learned that it whips very easily, thus making dishes so simple to prepare. I might even be able to prep a fruit salad without burning my house down.

Best of all, Magnolia All-Purpose Cream has zero trans-fat and no sugar added. As a Magnolia product, it comes from a tradition of good taste, and a name trusted by generations of Pinoys. Magnolia, of course, is today owned by San Miguel Pure Foods, the country’s leading food company.

If I had to choose a “Ken” as my Barbie boyfriend, it would be British supermodel David Gandy. SM Men’s Fashion flew him in to headline its Holiday 2013 and Spring-Summer 2014 collections in a series of events, among them an intimate cocktail party and meet-and-greet with the press, leading up to Gandy’s much-anticipated runway walk during Philippine Fashion Week.

Jeffrey Lo and Ayen Florendo, the heads of SM Men’s Fashion, were on hand to welcome David to the SM family.

Aside from “Barbie Live!,” there’s another show on its last day today. “The Producers” will have its final performance at 3:30 p.m. today at Repertory Philippines’ Onstage Theater, 2/F, Greenbelt 1, Makati. I was able to watch my friend Giselle Toengi’s wonderful performance on the show just a few weeks ago.

Veteran stage actor Noel Trinidad is amazing in “The Producers,” playing a gay director with all the swish and swoosh to bring to the role. At 72, he still has the comic timing and grace that brought him to TV fame many years ago. He is so good that, at one performance, a friend of his heard someone whisper, “Is it possible that Noel has been hiding in the closet all his 72 years?”

So have a happy Sunday, choosing between watching Ken or Noel!