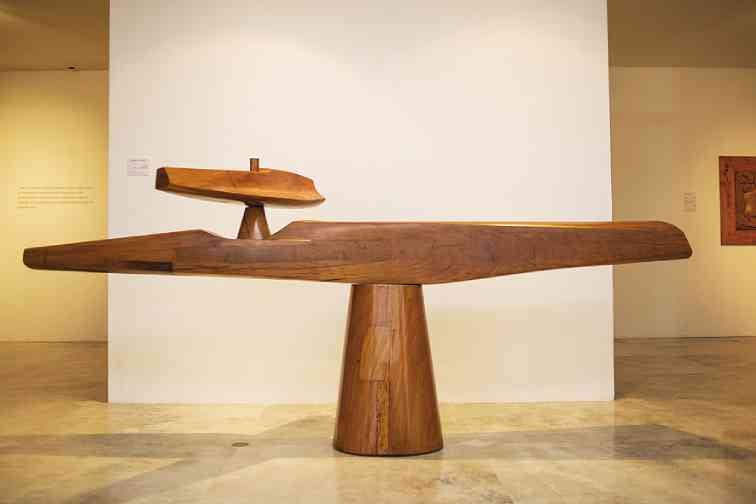 Napoleon V. Abueva (born 1930) is one of the most important figures in Philippine art history.

Acknowledged as the Father of Philippine Modern Sculpture, Abueva, according to an excerpt from his 1976 National Artist Award citation, “…is an artist of unquestionable power and seriousness.  Massive constructions of incredible variety and diversity, an unfailing inventiveness, a prodigious energy and inexhaustible inspiration firmly imprint his signature on the art of our time.”

At 46 years old at that time, Abueva was the youngest recipient of the National Artist Award.

On view is a collection of about 80 pieces of some of Abueva’s important works that gives the viewer a glimpse of his contribution to Philippine art from 1951 to 2009, such as “The Allegorical Harpoon” (1964, from the Cultural Center of the Philippines), “Dambana ng Pasko” (1982); and “Cultivated Plains” (1976; from the Bangko Sentral ng Pilipinas).

With over 700 works to his name in the span of 60 years, Abueva has significantly contributed to the landscape of Philippine art and culture with his numerous works, which include historical and heritage public sculpture, religious sculpture, functional pieces, architectural details, and even the death masks of famous personalities such as Benigno Aquino, Fernando Poe Jr. and Jaime Cardinal Jaime Sin.

Some of Abueva’s iconic works include “Dambana ng Kagitingan” in Bataan (1966); the UP Gateway (1967); “The Transfiguration” at Eternal Gardens Memorial Park (1979); “The Nine Muses” (1994) at the UP Faculty Center; “Sunburst” (1994) at the Peninsula Manila Hotel;  the bronze figure of Teodoro M. Kalaw in front of the National Library.

Ongoing at the Metropolitan Museum of Manila until Feb. 28, 2014 is the artist’s second retrospective in his career, “Abueva: The Power of Form.”  The exhibition, curated by Dannie Alvarez, takes inspiration from Cid Reye’s massive coffeetable book, “Abueva,” published in 2010.

Either free-standing or in relief, realistic or abstract, Abueva’s works often conjure solid power and sensitivity in the same breath.

Abueva in the early ’50s broke new ground in the field of Philippine sculpture then dominated by the classic Greek-inspired style of his mentor, Guillermo Tolentino.

The first time the art scene had ever witnessed an abstract work in the three-dimensional form was with the work “Halik,” which won the second place in the Art Association of the Philippines in 1951.

Inspired by one of the most influential 20th-century sculptors—Romanian artist Constantin Brâncusi’s (1876-1957) “The Kiss”—“Halik” is made from adobe and is a minimalist solid block with  only a hint of lines to define the forms, typical of Brancusi’s style.

Reyes cites this influence: “To Abueva, Brâncusi was the sorcerer of modern sculpture from whom he would learn all the secrets of significant form.”

Groundbreaking work from Abueva’s early career is “The Code of Kalantiao” (1953), which is on view in the show.

Another feat that broke new ground were his 1954 buoyant sculptures  he exhibited for his master’s degree at the Cranbrook Academy of Art.  In his book “Abueva,” Reyes says “It is safe to assume that… Abueva was a progenitor of the concept of buoyant sculpture.”

Abueva’s diverse artistic styles are a testament to his ardent devotion to art that can be gleaned from the exhibition.  This variety of styles continues to prove the artist’s masterful skill in any medium such as his series of large wall-mounted relief sculptures, “Abstracts” (1964-1979), done in red narra, showing the graceful movement of overlapping formless shapes that defy the hardness of the wood.

Abueva has also done numerous works on the carabao since the 1950s, done in various medium, some of which can be seen in the show, often depicting the beast in languid repose, the lines like water gently flowing to define form.

Also featured in the show are larger-than-life crucifixes and a number of religious pieces that exhibit the artist’s deep Catholic upbringing.

Other themes found in the show are variations on the family, the nude female form, and his famous benches.

Although he’s a pioneer modernist, Abueva has rejected any labeling.

“One’s imagination and feeling toward  a certain subject should be interpreted in one’s  chosen medium irrespective of the prevailing style of the period as the subject is best fitted for execution,” he says in Cid Reyes’ book. “For a good piece of art transcends any period and has perpetual value.”

“Billy,” as he is fondly called, is a quintessential artist who is also a writer, poet, philosopher, and composer whose talent knows no bounds.