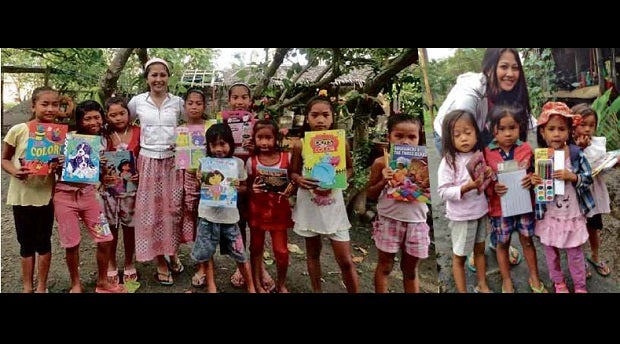 Donna May Unida, a 28-year-old nurse, has been holding a Christmas gift-giving project in Cagayan province, her hometown, since 2010. She gives used clothes, toys and school supplies to children in a far-flung barangay, where many kids are malnourished and unable to study.

She’s based in Manila and usually goes home to Cagayan for the holidays. One summer, during a town fiesta, she gathered kids for games and gave away small prizes. This gave her the idea to hold an outreach activity for the kids.

With her Christmas bonus, she bought educational toys, books and school items. She distributed these to 20 kids, who were more than happy to join in her parlor games.

The activity became an annual treat that the kids looked forward to every Christmas.

Unida wanted to help more children and posted photos from last year’s activity on her Facebook account. Word got around and she was able to gather enough gifts for 50 kids! Her friends asked other friends to contribute and her family helped repack the gifts. These packs were given along with simple snacks.

“I was able to give their primary needs in school, since their families cannot buy for them,” she said, adding that she hopes to help more kids.

Her wish is for the children to meet Jollibee the mascot, as many of these kids have never been to a Jollibee store.

As a nurse, Unida has volunteered in medical missions.

While riding the Light Rail Transit on her way to work, she met the family of a patient who was confined in the Philippine General Hospital. She found ways to assist in the family’s needs.

She also helped another patient, a kid with hydrocephalus, by giving money for milk, diapers and medicine.

She once took pity on a man who would sit on the pavement near her house. One time, he asked her for food.

She gave him dinner and they talked. He said he’s an education graduate from Bataan who wanted to land a job in Manila. But while applying for work, his money was stolen; with no relatives in Manila, he ended up as a vagrant, roaming the streets, lost and homeless.

Instead of giving him food every night, Unida decided to help him go back home to Bataan. “I did not get scared of him,” she said.