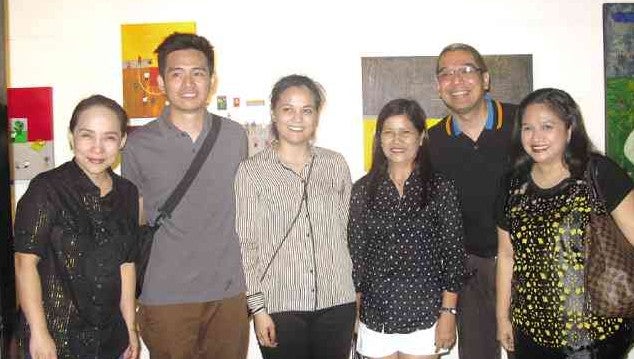 Through a series of acrylic-on-canvas paintings, London-based Filipino artist Yveese Belen traces her love affair with the late artist Romeo Forbes, her foray into painting, and her struggle to cope with Forbes’ death.

“Love, Faith, and Hope,” the collection of recent works by Belen, is  on view at Gallery Nine (4/L, Bldg. A, Megamall, Mandaluyong City).

Forbes gained national recognition by winning the Grand Prize in the Watercolor Category of Art Petron 2001. He held a sold-out first one-man exhibit titled “Elias and His Trees” in 2005.  The following year, he succumbed to cancer of the intestines. He was only  25.

Belen was his girlfriend. Both won national art prizes even when they were still Fine Arts students; he  the University of the East, she at  University of Santo Tomas.

In her latest exhibit, Belen uses her staple technique of scratching, also known as sgraffito, where a surface is applied with plaster and then scratched on to produce an outline drawing.

Some of the pieces were inspired by songs of the Beatles and Beastie Boys, and all  are accompanied with brief notes telling anecdotes that relate to one another in a narrative arch.

In the first painting, “Here Comes the Sun,” Belen says she met Forbes in the summer of 1998 during a basketball tournament. The artwork shows strips of varying shades of orange studded with many faceless creatures in a show of fanfare.

“Come Together,” the fourth in the series, tells how the two kept their affair a secret for two years. In the painting, people are out and about on the streets while the lovers, trying to be oblivious to one another’s presence, covertly give one another a glance.

Set against a cool bluish green background, “Good Morning, Good Morning” tells how Forbes inspired her to paint. “A Day in the Life” recounts Forbes’ first solo exhibition in 2005.

On the same year, Forbes was diagnosed with cancer. This is told in “With a Little Help from My Friends,” which presumably shows her kneeling on a pew inside a church.

“Sa Isip, sa Salita, at sa Gawa” marks her departure for London. It shows Belen walking by herself on a path while surrounded by people.

Seven years after Forbes died, Belen fell in love with a college friend whom she eventually married. This is told in “Let’s Stay Together” and “Yellow,” both of which show stark contrast between light and dark tones, a suggestion that Belen might have been able to fight off the darkness that descended upon her in the aftermath of Forbes’ passing.

Belen was also a recipient of the Benavidez Award for excellence in the visual arts when she was a student at UST.

“In this gathering of 14 new works by London-based Yveese Belen. We see reiterations of her distinctive style of figuration, in particular the bold combinatory of colors and shades to suggest silhouette or shape, planarity, and a dimensionality of striking flatness.

“Her stick figures, to which she fondly gives the playful name ‘nognog,”’are here in plentiful proliferation, pressed into all sorts of uses: as presence, as placeholders, as emblems, as delineation.

“Again, they beautifully allude to the figurative traditions of Haitian, even Vietnamese, folk painting.”

But Campomanes said the show provides something different as well:

“The difference this time is the attempt at narrative,” he said. “It would be good to converse with her about the stories that underpin at least two of the paintings, which have something to do with important transitions in this prodigious young artist’s life!”