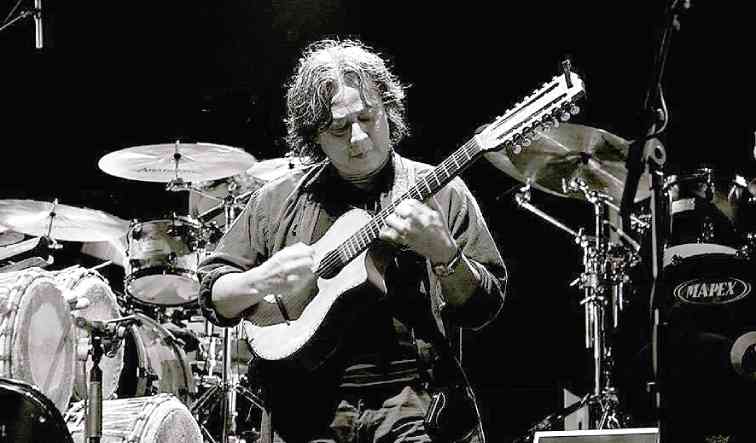 BOB Aves’ new album, “Out of Tradition,” consists of tunes first heard during the 2nd International Jazz Festival last September at the Cultural Center of the Philippines. JAN BENDL

For Filipino jazz exponent Bob Aves, the Philippines, which has a rich and deep musical tradition, is his classroom while the rest of the world is his market.

And like everybody else who attempts to take on the global stage, what Aves brings with him is his identity, specifically his own blend of Filipino jazz—a mix of improvisation and the unique notes produced by indigenous instruments such as the kulintang.

Bacolod-born Aves has so far produced two albums that showcase this music.

His first album was called “Translating the Gongs.” This was followed by his latest release, “Out of Tradition,” the tracks of which were heard during his performance at the 2nd CCP International Jazz Festival last September at the Cultural Center of the Philippines.

He says that while “Translating the Gongs” focuses on Maguindanao music, “Out of Tradition” uses a more universal approach to melodies and harmonies that make the original tunes easier to listen to, thus contributing to his campaign to bring Filipino world music to a larger audience.

Aves first learned to play the piano as a child growing up in Bacolod. Tickling the ivories soon gave way to strumming the guitar in his early teens, when his cousin taught him three basic “open” guitar chords.

He taught himself to play; the guitar remains his main instrument.

Aves says becoming a guitar player during his teens was an exciting time as Woodstock had just happened and Jimi Hendrix held court, along with other guitar heroes like Eric Clapton and Jimmy Page.

But it was the music of jazz god Miles Davies that steered Aves into a different musical path.

“Nothing in my musical experiences (and even my unhealthy habits at that time) prepared me for this one. I would say that it became the turning point in my musical direction. I was very intrigued by his music and was determined to learn it,” says Aves.

To enhance his education he went to the Berklee School of Music in Boston, Massachusetts, where most of his jazz idols were either teaching or giving workshops. He knew he had to go there if he wanted to be better at his chosen craft.

“No doubt there were other, even older, jazz institutions in the United States, but Berklee at that time was the hot new kid in the block and was the place to go to if you’re into  jazz fusion. I took the school’s correspondence course first before actually going there,” he says.

But when he came back home, armed with a Bachelor’s degree in Composition, he also came crashing back to the reality that the Filipino market for jazz is not nearly as big as that in the US; it was a “real world that didn’t like bop or any of that heavy jazz stuff,” he recalls.

“Sadly, arranging for pop music in Manila marked the beginning of my professional career. Putting my jazz dreams aside was the difficult part. But, as they say, we all have to pay our dues,” says Aves, who got his Composition degree in 1979.

He still does some pop arrangements for a few artist friends, including singer-songwriter Noel Cabangon, and occasionally does film scoring for documentaries and independent films as well as commercial jingles.

These are his day jobs, he says, that have allowed him to continue his musical explorations in jazz without trepidation. That includes bringing his type of Filipino jazz to the global audience through international events such as the Penang International Jazz Festival (Malaysia), Zhujiajiao Water Village Music Festival (Shanghai, China) and the Jarasum Jazz Festival (Korea).

“The music we bring to these festivals is what the international artist community expected from us. I believe everybody has a choice as to what music he or she wants to do. And there’s always a place for each of these types of music,” says Aves.

What makes Aves’ music a note above the rest is the infusion of indigenous instruments, not so much the sound, but what they represent.

“The whole crux of our musical advocacy is about identity. Musical style is just a vehicle, a vehicle that we’re most comfortable with, where we can best express ourselves, our skills, our beliefs… and in my case, it’s jazz. But it seemed like an awful waste of my creative life if all I did was copy American mainstream jazz. I’ve always been a rebel, loved breaking rules and preferred to do things my way—just the right mind-set if one was to create a new style of music. So, developing our jazz identity was simply putting my rebellious attitude into good use,” he says.

This admirable search for identity led Aves to explore his Southeast Asian heritage, saying that it was the best place to look for elements that comprise what he believes to be Filipino jazz.

“But putting them together was the hard part. This was a trial-and-error process that took over 15 years of experimentation. By chance, our world music group with Grace (Nono, his wife) involved indigenous artists from Kalinga and Maguindanao. We had this group for over four years and that gave me first-hand experience working with these artists and their traditional music. It was during this time that I began to develop ideas on how to go about fusing these cultures. The result of this knowledge was let loose on the album ‘Translating The Gongs,’” he says.

He took a step further in his new album “Out of Tradition.” Filipino jazz lovers had a chance to hear it at his concert last Dec. 11 at the Peta Theater Center in Quezon City.

“I wanted the audience to experience something they don’t get to see or hear very often, which is Philippine world jazz, a groundbreaking integration of our traditional gongs and jazz. The concert was also the launching of my new album ‘Out of Tradition.’  This is the second album of my Philippine jazz series, which is an ongoing lifetime project of mine to develop our jazz identity. We  performed all the pieces from the new album as well as pieces from the first album ‘Translating The Gongs,’” he recounted.

At the concert, Aves played with a handpicked group composed of Dix Lucero on sax, Nikko Rivera on keyboards, Tusa Montes on kulintang, Colby de la Calzada on bass, Harald Huyssen on drums and Jazz Dufourt on gongs and percussions.