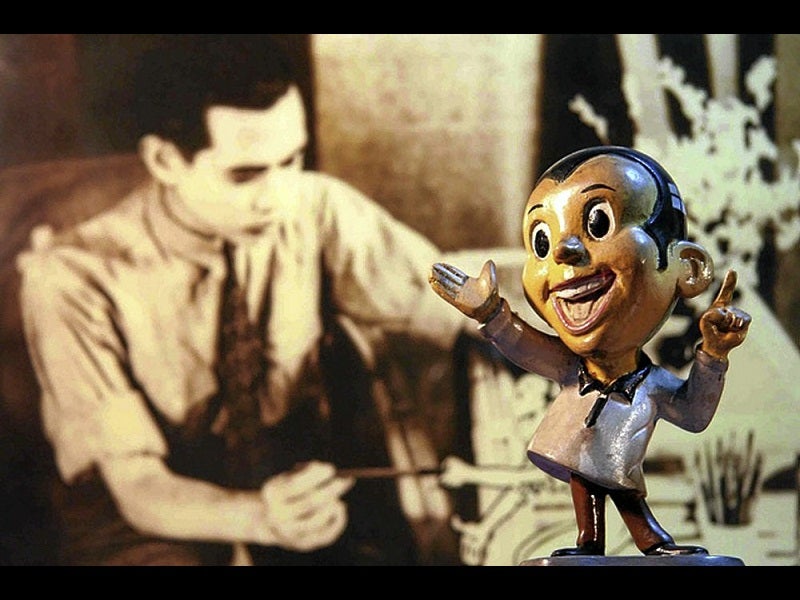 Tony Velasquez and a statue of his greatest creation. From the collection of Dennis Villegas. Contributed photo

Perhaps the truest sign that something has truly entered the sphere of everyday Filipino life is for a name to become permanently integrated into the vibrant Filipino language. Such is certainly the case with the word “Kenkoy,” a description foisted on someone funny or amusing. With its standout consonants and playful vowels, the name Kenkoy just radiates humor.

It also radiates with history. The word of course is a name that shines from the earliest days of the Pinoy komiks page. “Kenkoy” is the name of the title character as well as the comic strip that changed everything for Filipino cartoonists. Here’s why.

When Antonio “Tony” Velasquez created Kenkoy in 1928, he was barely 18, a student at Jose Rizal College. He had started working part-time in the publishing industry at 16 but finally jumpstarted his career with a comic strip in the January 11, 1929 issue of the venerable Tagalog magazine Liwayway. That character was Kenkoy, created together with scripter Romualdo Ramos. Though Velasquez would go on to create and draw other comic strip characters, none of them would have the impact and meaning that Kenkoy possessed.

Gerry Alanguilan, the award-winning creator of the comic books “Wasted” and “Elmer,” has devoted his life to the preservation of Filipino comics history – of which Kenkoy is something of a Rosetta Stone. Apparently those who grew up reading Kenkoy weekly were lucky. “I do have a reprint of the ‘Album ng Kabalbalan ni Kenkoy,’ a collection of 1930s strips the original print of which may well be the very first Philippine comic book. I have also read some Kenkoy strips off Liwayway, including what may well be the very first Kenkoy strip from 1929 which I saw at the Lopez Museum,” Alanguilan says.

“I have also seen various pieces of original art from the collection of an acquaintance. And that is also the tragedy of it. There is very little access any regular Pinoy has to the great bulk of Tony Velasquez’s Kenkoy. Much of it has never been collected, and nearly all material is still in its original print form, what little copies out there are in the hands of collectors.”

With his extremely combed back hairdo and outlandish clothes, Kenkoy was a bright funhouse mirror lifted up to the collective face of Filipino society, reflecting the excesses and the silliness of whatever era he appeared in, beginning with the American era, always overdressed and speaking a bizarre combination of languages. A bit of a mischievous and inveterate trickster, Kenkoy evolved with the times, displaying the foibles and folly of Filipinos belonging to that specific era. Kenkoy met his match in Rosing, the timelessly prim-and-proper target of his affections and theirs was a love story that was equal parts funny and sincere.  It was all embraced by readers for both its surface slapstick as well as its knowing references to daily life as Filipinos knew it. It defined what would become the weekly Filipino comic strip – better known as komiks.

“Kenkoy can be read on several levels. On the surface, he’s quite funny and entertaining in a very Filipino way,” Alanguilan says. “On another level it can be seen as commentary on the ridiculousness of Filipinos trying to act and speak like Americans, something that was more apparent in the earlier strips.”

Velasquez turned Kenkoy into a weekly must-read and his colorful stylings would survive a world war. Aside from making a brilliant splash in advertising through his distinctive graphic cartoon style, Velasquez would empower an entire generation of budding cartoonists through the timely birth of the Ace line of publications.

Alanguilan explains the importance of Kenkoy this way: “Even though it was Jose Rizal himself who was the very first comics creator in the Philippines, Tony Velasquez was the man who popularized the medium through not only the creation of Kenkoy, which appeared regularly every week from Liwayway, but by pioneering the comic book format through Ace Publications and what eventually became the most enduring comic books in the country’s history: Pilipino Komiks, Tagalog Klasiks, Hiwaga, Espesyal and Kenkoy Komiks. He was the editor in chief of the entire line and was responsible for getting them off the ground and steering that ship for many decades. Tony Velasquez quite literally created the Philippine Komiks Industry.”

After decades of vibrant creative graphic work, Velasquez departed this four-color life in 1997 – he was 86. But Kenkoy would live on.

Like many others growing up, interior designer Marcelo Alonzo knew Kenkoy very well. “I grew up with him,” Alonzo recalls. “Kenkoy even predates Mickey Mouse by a few months.” But Alonzo had grander designs in mind for Kenkoy. At the turn of the 21st century, Alonzo sought out Pilar Velasquez, Tony’s widow, and gained the license to Kenkoy for 20 years. He had thought of doing merchandise or other Kenkoy projects, and would go on to feature Kenkoy in his komiks-themed café in Malate, Manila from 2001 until 2006.

Ever a resurgent property, Kenkoy has seen his strip reprinted and had been transformed at different times from a comic strip into a movie and even a stage musical. Who then would imagine that Kenkoy would find new life in the unlikely form of a fashion line?

One year after showcasing the art of the late great Larry Alcala in their Pinoy Cartoonist Memorabilia series, the clothing brand Solo was poised to showcase another komiks luminary. Sheree Roxas Gotuaco, chief executive officer of Elite Garments, which produces Solo, explains, “We thought of using Kenkoy next because the character is the product of the Father of Philippine Cartoon who inspired the works of many of our cartoonists today. Where better to go than the very start? It is amazing that his work has stood the test of time and has become so popular that his character has evolved to become part of our Filipino pop vocabulary.”

After contacting the Velasquez family, Gotuaco touched base with Alonzo, who gave his permission for a merchandising line. “When I shared our plan to pay homage to Kenkoy through Solo, he was pleased and became very excited about it,” Gotuaco says. She quotes Alonzo as saying that the clothing line was a good idea, “to keep the spirit of Kenkoy and the legacy of Tony Velasquez alive.”

In fact, Gotuaco explains that the hip Solo ensembles are very much in keeping with Kenkoy’s shifting styles:  “Even though the clothes we feature in this collection are not copies of the clothes that his characters wore, the styles we feature reflect the current hip trends for young men and women today such as what Kenkoy reflected during his time.”

Velasquez’s work continues to be celebrated and remains influential today, part of his gift to Filipino society. “His legacy is being original and pioneering at that time, and by so doing, he has inspired many cartoonists in his wake,” Gotuaco adds. “It gets much harder to think of original ideas as time goes by; it is much easier to be copy cats, that is why I have great respect for original creative ideas.”

Velasquez’s lasting impact goes beyond pop culture and the sparkling colors of Kenkoy. Tony Velasquez’s legacy, according to Alanguilan is “literally Filipino Komiks art, and all of us are creating comics today.” •