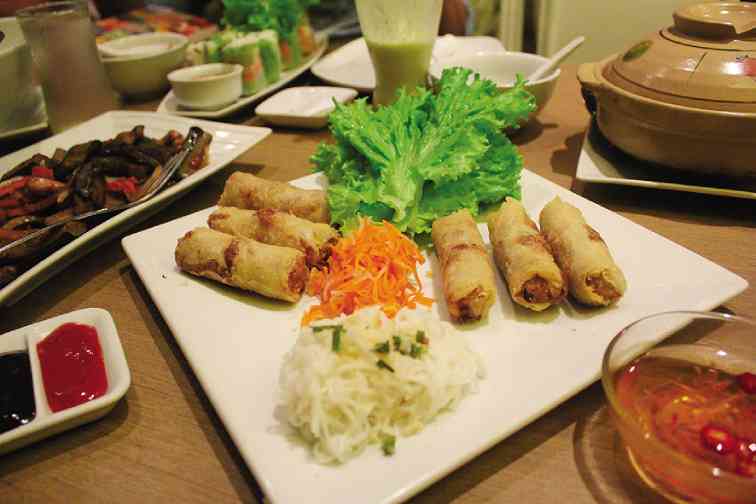 Vietnamese family recipes in the heart of Makati

La Petite Camille is a relatively new Vietnamese restaurant  in Greenbelt 5, Makati City. But one might wonder, who is Camille?

Truth is, La Petite Camille, or “little girl Camille,” is a name that the restaurant’s founder Mama Phon (pronounced “Fong”) thought of because it sounded nice.

The restaurant celebrated its first anniversary this month. (It opened Dec. 17, 2012.)

The restaurant’s original site was in Millbrae, California. Mama Phon, LPC’s founder and culinary inspiration, set up shop in 1992 when she migrated to the United States from Vietnam.

After much persuasion, Phon finally decided to bring her restaurant to the Philippines, in partnership with the people behind popular restaurants such as Super Bowl of China, Yomenya Goemon Japanese Spaghetti House, and Nanbantei of Tokyo.

The place has a French colonial design—brightly painted walls with wood furnishings that give off an inviting, warm vibe. Mama Phon herself flew to Manila a few weeks before the opening to oversee the training of the kitchen staff. She has been shuttling between Manila and California since 2010 to source the freshest local ingredients and to get a better feel of the market.

The menu has offerings from starters to salads, soup, pho, meat, seafood, noodles and dessert. There are (on average) about four to five items per category—not a daunting number for the foodie.

So, which items are a hit?

“Definitely the Vietnamese Barbecue—they are the bestsellers in my restaurant in the US. For the pho, it’s the Beef Stew Noodle Soup. For appetizers, it’s the Imperial and Summer Rolls,” Mama Phon said.

The Imperial Rolls (P270) is its version of the spring rolls popular in Vietnamese (and Thai) places. Generously stuffed with minced pork, mushrooms, vegetables, these deep-fried treats are served with vermicelli noodles and lettuce leaves on the side.

There are also selections of pork, beef, chicken and vegetable dishes that go well with a serving of Steamed Jasmine Rice (P50) or Garlic Fried Rice (P70).

The Special Rice in Claypot (P270) is a meal in itself. Something that’s sure to appeal to Filipinos, it boasts a mix of prawns, chicken, Chinese chorizo and vegetables liberally scattered on a bed of piping Jasmine rice.

The Pho Combination (P285) is perfect for carnivores because it has beef balls, raw beef and cooked beef. However, the clear star is the broth. It isn’t overpowering, but just enough to stimulate the palate.

As dessert is being served, we wonder if there is still enough room for it in our tummy. But the stuff looks too good to pass up.

Lighter options are also on the menu, like the Vietnamese Jell-O (P110), or the more delicate Pandan and Yellow Mung Bean (P110).

The marinade, soup and sauces are all Mama Phon’s unique recipes. They are closely guarded family secrets that not even the local kitchen staff is privy to.