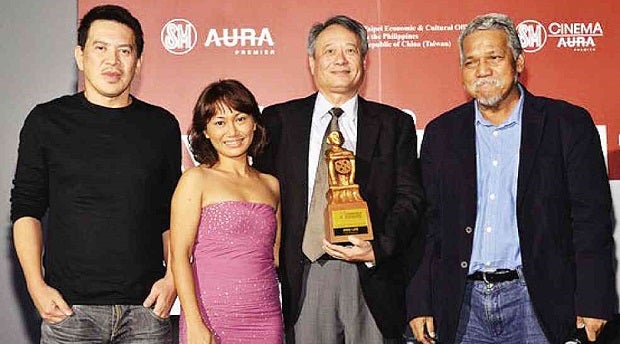 Taipei office hosts gig to welcome Ang Lee; Christmas bash for a cause in Macau

“A Salute to Ang Lee” was in partnership with the Film Development Council of the Philippines, 20th Century Fox and SM Cinema.

The world-acclaimed film director jetted to Manille for a one-of-a-kind happening attended by personalities from the film industry, media and big business, education and diplomacy.

“Life of Pi,” the film that earned for Ang Lee last year his second Oscar best director (the first was for “Brokeback Mountain” in 2005), was screened at the humongous IMAX Theater in ultra-modern SM Aura Premier, dahlings.

Based on the Booker-winning novel by Canadian writer Yann Martel, “Life of Pi” also won Oscars for cinematography, visual effects, and musical scoring.

Ang Lee received a thunderous standing ovation during the open forum, where he was joined by brilliant local filmmakers such as Brillante Mendoza and Tikoy Aguiluz, who awarded him a Gawad Lino Brocka Trophy of Appreciation from Cinemanila.

After the grand Teco welcome event, dahlings, another special screening of “Life of Pi” was held at the IMAX Theater in SM Aura Premier, natch!

Rustan’s celebrated the glory days of disco in Disco Love, an exposition of its brands under its wing, at the Prive of the Fort in Taguig recently.

Our town’s young and hip set turned the time machine back to the ’80s, courtesy of the country’s finest fashion and lifestyle hub.

Amid the trippy tunes of Deuce Manila and She’s Only Sixteen, Rustan’s unleashed its young fashion brands such as U, Insight, Seafolly, Doll House, Flying Tomato, Nike, Havaianas, Toms and Outdoor Products. Their collections were characterized by loud colors and clashing prints that totally inspired the disco years.

Hosted by boom-box bachelors Sam YG and Tony Toni, the affair treated guests to a rainbow of cocktails and confections, as well as tons of exciting awards and prizes, dahlings.

Some luckier invitees got three-day, two-night packages from Boracay’s ultra-modern hotel, The District. Special awards were given to the social media-savvy, such as the Instagram Photo of the Night, Tweet of the Night, Awesome Tweep and Awesome Instagrammer.

The affair also sought to raise funds for survivors of Typhoon “Yolanda.”

Rustan’s Disco Love reminded everyone, especially the baby boomers, the young at heart, and today’s hip crowd how dance music could add fun and spirit to life. ’Di bala, palanggas?

It was an awesome bash to celebrate the holiday season and the brand’s regional success, dahlings.

As it was a costume affair, the Philippine rah! rah! team dressed up as Red Cross Volunteers wearing “We are One, Save the Typhoon Victims” shirts, to show support for those ravaged by Yolanda.

Their stunt promoted the relief campaign and made Esprit executives and country branches donate to the storm survivors. On a global scale, therefore, Esprit is doing its share to help out the Philippines. And the Macau affair became a Christmas bash for a cause.

When it was rock-and-rolling time, the invitees jumped out of their seats and shook the dance floor till way past Cinderella’s time. They stretched Macau’s nightlife, dahlings.

Esprit is exclusively distributed in the Philippines by Cinderella Marketing Corp.