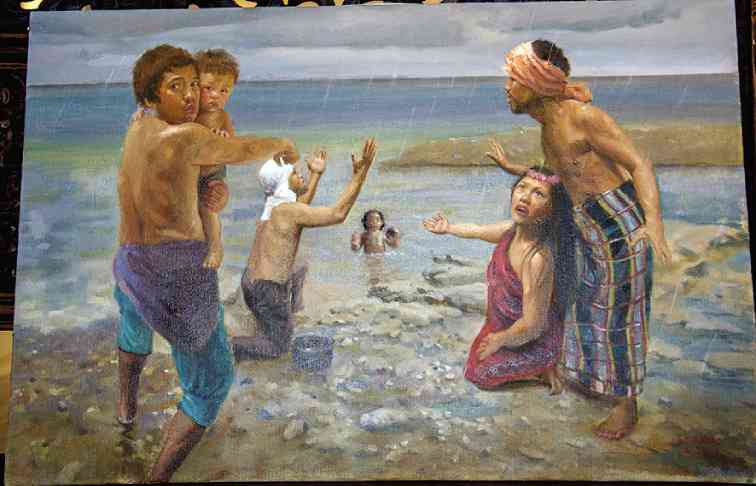 SANTO Niño emerges from the sea

This week’s Santo Niño de Cebu festivities kick off the long celebration toward the 450th anniversary in 2015 of the rediscovery of the icon by the returning Spanish expedition led by Miguel Lopez de Legazpi and Augustinian missionaries.

The history of the devotion, called by the Spanish Dominican historian Fr. Fidel Villarroel as the biggest and most popular devotion in the Philippines (bigger than the Black Nazarene of Quiapo), is surveyed in a history exhibit at SM City Cebu.

The exhibit does not include the original icon, but showcases the “pilgrim” replica of the 1521 icon. The copy was commissioned in 1965 when the country marked the 400th anniversary of the finding of the original image.

The exhibit is one of the highlights of “Fiesta Señor 2014,” the annual celebration of the Santo Niño de Jesus de Cebu.

The original icon is enshrined at the Basilica Minore del Santo Niño. It is considered the oldest religious relic in the Philippines.

According to Fr. Harold Rentoria, OSA, incoming commissioner of the National Commission for Culture and the Arts and director of the Augustinian celebrations, the exhibit pays tribute to the sturdy devotion of Filipinos to the Santo Niño, which dates back to the 16th century.

“The yearlong activities, including this exhibition, aim at strengthening the devotion to the Child Jesus by presenting the spiritual development of the Visayas through Santo Niño and the Augustinians in Cebu,” Rentoria said.

In the exhibit, the pilgrim image is encased in the authentic 17th-century silver processional urn of the Santo Niño de Cebu.

Selected historical paintings and photographs, under the custody of Filipino Augustinians, and an audio-visual presentation on the growth of devotion to the Santo Niño, side by side with the efforts of the Order of Saint Augustine to develop the spirituality of Cebu and the rest of the Visayas, comprise the various sections of the exhibit.

A symbolic oil painting portrays early inhabitants of Cebu welcoming a child emerging from the sea. The image exudes wonder and faith, as a native points to the heavens and raises both hands.

Another painting depicts the arrival of the Spaniards, showing them alighting from a galleon.

Masterful portraits also figure in the exhibit. Among them are those of Portuguese explorer Ferdinand Magellan (Magallanes); Fr. Pedro de Agurto, OSA, the first bishop of Cebu; Queen Juana of Cebu, the Christian convert; Fr. Andres de Urdaneta, OSA, the great Spanish circumnavigator; and Miguel Lopez de Legazpi, who was among the first to make peace with the indigenous peoples of the islands.

The exhibit brings its audience to a tour of history, starting from 1521, the historic arrival of Magellan, whose expedition introduced Christianity to the Philippines.

It is said that King Humabon and his subjects, numbering around 800, accepted the faith and were eventually baptized by the expedition’s chaplain, Fr. Pedro Valderrama. Around this time, Queen Juana’s request to have the image of the Santo Niño placed in her altar was granted by the chaplain and the Portuguese navigator.

Forty-four years after the departure of Magellan’s expedition, the Legazpi-Urdaneta expedition landed in Cebu. On April 28, 1565, they found the icon given to Queen Juana. Cebuanos now celebrate the finding of the image during the Kaplag festivities in April. This is the second section of the exhibit.

On the actual site, a partially scorched hut where the image was found, the church and convent of the Augustinians were erected. And so, the Christianization of the Philippines was pursued by the Augustinians.

Their evangelization efforts came in tandem with their efforts to promote the devotion to the Santo Niño, so much so that other Augustinian mission sites became centers of the Santo Niño devotion outside of Cebu, such as Iloilo, Aklan, Tondo and Pandacan, which are also set to mount big Santo Niño festivities this month.

Therefore, 2014 kicks off the wider celebration in the run-up to 2015, when the Philippines marks the 450th anniversary of the finding of the Santo Niño and the arrival of the Augustinians.

Cebuano artists participate in the exhibition with their renditions of dramatic miracles attributed to the Child Jesus in another section.

Also on exhibit are historic artifacts, such as the centuries-old silver urn and exquisitely crafted pews for the devotees of Santo Niño de Cebu.

The exhibit runs until Jan. 26.

“If we speak of challenges, for me, the greatest and most current for the Order is that of its development in the Asia-Pacific region,” Anton said.

Prior provincial of the Filipino Augustinians is Fr. Eusebio Berdon.