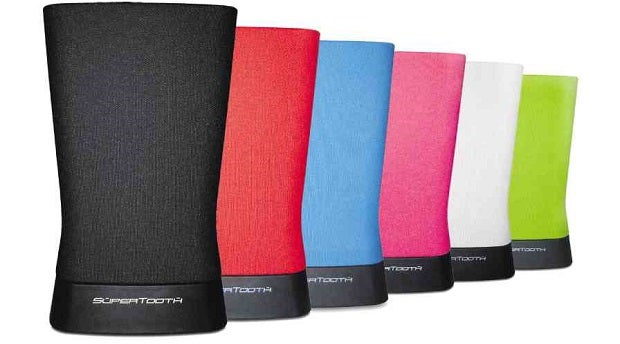 THE SUPERTOOTH Disco 2 portable wireless speakers may be used through smartphones, tablets and laptops.

Music has become ubiquitous, and nowhere is this more apparent than in the tunes stored in our smartphones and MP3 players. Thousands of songs are available at the touch of a finger, and more can be accessed via the Internet through streaming services or YouTube.

We generally keep the songs to ourselves, the acoustic goodness enjoyed as a solo affair through earphones.

As a result, a certain sense of community has somehow been lost in time—the convenience of portability overwhelming an age-old tradition of listening, for example, to one’s album collection with friends on a bulky boombox.

But even the most powerful of mobile phone speakers can’t hold a candle to a good personal stereo or laptop to play music.

Then again, technology has filled the void by way of portable Bluetooth speakers. The latest and perhaps one of the best to be made available in the country so far is the SuperTooth Disco 2.

SuperTooth is a brand known for its line of portable Bluetooth speakers and accessories. The Disco 2 represents its most portable effort yet to amplify the sounds that we play on our phones and laptops.

At first glance, the Disco 2 immediately attracts, bearing an understated hourglass figure design—a refreshing look compared to the more gaudy and flashy speakers that we see in store shelves at the malls. It’s a bit heavier than other portable Bluetooth speakers, but this is explained by the 16-watt power output.

Unfortunately, the speaker can’t be charged via USB, and instead needs a 14-volt adapter that you have to carry around. But thankfully it comes with a carrying case.

Setting up the Disco 2 is very easy, requiring only a single-button press on the speaker itself, and a usual Bluetooth pairing with our phone. This is a great change from portable speakers with tangling wires, and finicky early Bluetooth speakers that took ages just to pair with a phone.

If needed, though, the Disco 2 still has a good old-fashioned 3.5-millimeter audio jack that can be used to connect to a laptop or an older music player that doesn’t have Bluetooth.

The sound it produces generates no less a good impression. Its maximum volume can fill up a medium-sized room; appropriately powerful bass and good midrange characterize its sound reproduction. But the higher treble ranges are drowned out past the Disco 2’s medium volume setting, and the entire unit rattles and distorts when the bass gets really heavy.

When testing the Disco 2, we also discover that the range is exactly as SuperTooth describes it—a good 10 meters. We are able to transmit audio to the Disco 2 even through concrete walls, though, of course, this noticeably lowers the range.

The connection it keeps with the phone is reliable, though one time, a strange, stuttering sound is heard for a few seconds.

The Disco 2 is not just your average, throwaway wireless speaker system. It’s a well-designed piece of audio equipment that breaks your music free from the personal tethers of earphones, while not being cumbersome, like having a laptop or large wired speaker setup will.

It brings back the wonderful experience of listening to music with friends, perfect for small gatherings or group parties.

THE FIRST time I got hold of the SuperTooth Disco 2 stereo speaker, I couldn’t figure out how to operate it, even with a manual.

That’s what happens to a 50-year-old geezer like me, who, despite having been a music fanatic all my life, still don’t know how to download a song on my smartphone—not entirely due to ignorance, but because I prefer listening to it without earphones.

Somehow I feel sad, disturbed even, when, for instance, I see people riding the MRT looking oblivious to everything around them as they get lost in the privacy of hearing their downloaded songs through headsets on their phones. Although I get curious when they start nodding their heads or tapping their feet, they end up looking stupid when they start singing loudly along to the lyrics of a song that has been muted from the outside world by their headsets.

Perhaps the good thing about the whole scene is that the rest of humanity in the train is spared of the atrocity of hearing what might turn out to be a lousy-sounding song, if it’s played through loudspeakers.

But back to the Disco 2. I had to seek the assistance of Anton, the 22-year-old techie son of a friend, to operate the portable wireless speaker, which, it turned out, needed to be fully charged to appreciate its optimum performance. That would take some two hours of plugging its adapter to an electric socket.

That’s about the only “hassle”; otherwise, it took just a few seconds to “pair” the Disco 2 to his smartphone. When Anton successfully turned the Disco 2 on with a Miles Davis tune from the legendary trumpeter’s 1969 album, “In a Silent Way,” the sound was rich and full, swirling and enveloping the den of the house of Anton’s grandparents at No. 13 Mayaman St. in UP Village, Quezon City.

When I took the Disco 2 to my apartment and plugged it into my laptop, I discovered that the audio playback’s quality depends on how the song was uploaded; if for example, the tune is from an HD (high-definition) audio clip from YouTube, then it’s guaranteed to give a splendid sound.

After listening to a “full album, stereo remastered” version of the Beatles’ 1965 album “Rubber Soul” from YouTube on the Disco 2, the more I was convinced that nothing beats music played on a speaker.

Now I’m looking for a good-quality version of Daft Punk’s “Get Lucky” and Bruno Mars’ “Treasure” to download, to test whether the Disco 2 is appropriately named.

In any case, I won’t mind dancing with myself. Pocholo Concepcion