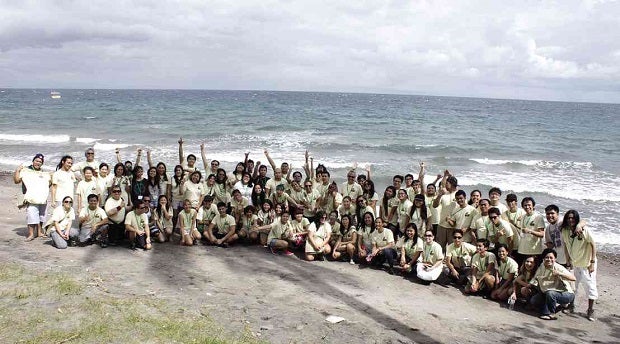 The 60 young singers and songwriters from different parts of the country, who were chosen to participate in the 4th Elements National Singing Songwriting Camp, came as artists thirsting for knowledge.

At the end of five days of working and learning from each other and their mentors—composed of some the most respected figures in the local music industry—the “campers” left with a resolve to pursue their craft with pride and confidence.

This was the feeling expressed by 26-year-old Davey Langit, who says that the annual event held in Dumaguete, Negros Oriental, is a “Disneyland” for budding singers and songwriters like him who dream of making a dent in mainstream music.

“The experience was mind-blowing—just being there with 59 other people who share the same passion for singing and songwriting, not to mention spending time and learning from the camp mentors. It was such a privilege. It was like Disneyland for a singer-songwriter—you sleep (a little), wake up early, do music all day and not feel tired at all!,” says the Baguio-born Langit, whose own tune, “The Selfie Song,” has enjoyed over 2 million hits on YouTube.

He says that what he treasures most from Elements was the affirmation that writing and singing songs was what he wanted to do with his life.

“The camp kind of legitimized me as a songwriter… So, I will go out and keep doing what I love and what I do best. Hopefully, I will make it big, one way or another, in this saturated industry. As they say, ‘keep on doing what you do, because someday, someone will eventually find you.’”

One of the many highlights of his Elements experience was hanging out with his idol, Ebe Dancel. He was also moved by the stories of Kamikazee’s Jay Contreras, who struggled long and hard before hitting it big.

But Langit’s life-changing moment, he says, came when Jim Paredes told him: “You know what? I don’t say this very often, but trust me, you are going to make it.”

It was enough to make him cry because “it has been really hard. But knowing that these legends believe in what you do makes you believe all the more in yourself,” says Langit.

For 22-year-old Lara Maigue, one of her inspirations to keep reaching for the stars is Rey Valera, who finally relented to persistent requests to be a mentor in Elements—which has become the country’s biggest camp for singers-songwriters mounted by nonprofit firm 7101 Music Nation Corp. and bankrolled by TaosPuso Foundation of Tao Corp.

Maigue, whose song “Sa ’Yo Na Lang Ako” interpreted by Karylle was awarded one of Philpop 2013’s top five songs, says that meeting Valera was another life-changing moment.

“He made me sing my composition at the camp. And then he told me that that was the first time in a long while that he heard that type of song. And he also said he would keep an eye on me,” says Maigue, who is majoring in Voice at the University of the Philippines College of Music under the tutelage of Fides Cuyugan-Asencio.

“I won’t let him down,” adds Maigue. “I got to reflect a lot, and it made me realize that I want to be the ‘next me.’ Not the next Rey Valera or Ogie Alcasid (who are my idols), but the next Lara Maigue,” she says.

“I plan to make music my whole life. I want to make my mentors proud, I want to inspire and I want to touch people’s lives with my music. I want to give back,” says Maigue, who is about to do a musical teleserye with TV5 and write a song for Sharon Cuneta.

Reese Lansangan, vocalist of  pop band Dressed Up Days and the other half of indie duo Reese and Vica with Vica Hernandez, shares the same sentiment. She says that Elements opened up many perspectives in music from both campers and mentors, who included Ryan Cayabyab, Noel Cabangon, Jimmy Antiporda, Armi Millare, Gloc 9 and Joey Ayala.

“I want to push myself to find my own voice and identity in the local music industry. I plan to record my own solo album sometime next year… I also intend to keep the relationships I have built in Elements and nurture them through regular gigs and collaborations,” says Lansangan, who has a Fine Arts degree from the Ateneo de Manila University.

She says that her best moment at camp was when she became one of the 12 who made it to the “Mentor’s Choice” list. She performed her audition song, “A Song About Space,” for the whole camp on the second night and the response was “overwhelming.”

“After that performance, mentors kept going up to me at random times, praising my song and saying wonderful words which I never, in a million years, thought I would hear coming from such prolific people. I guess that affirmation and the amazing encouragement I got from both campers and mentors told me, ‘Hey, maybe I’m doing something right.’ That gives me a lot of faith in my own voice as an artist, and reminds me to always be true and honest to myself in whatever I do,” she says.