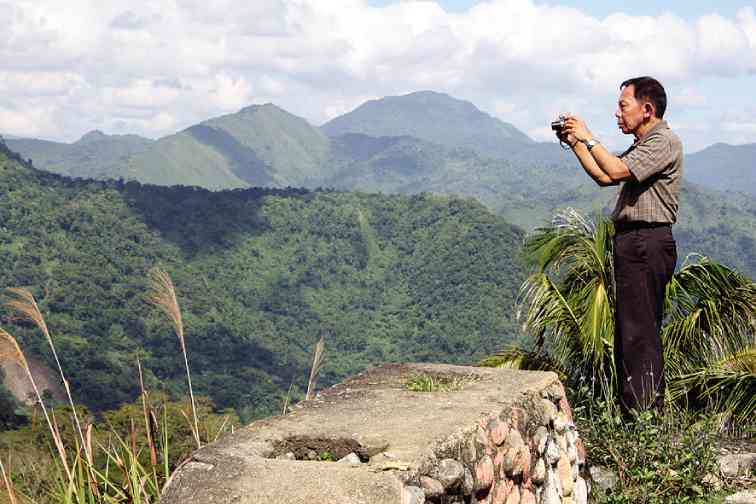 DE LEON researching in the Cordillera: He has worked for the Ifugao epic “Hudhud” to be included in the World Heritage List.

Felipe M. de Leon, Jr.: ‘We should be proud of Filipino genius and culture’

February will see the country celebrating the National Arts Month (NAM).  As the chairman of the National Commission for Culture and the Arts (NCCA), government’s primary agency for the arts and culture, Felipe M. de Leon Jr. is not only on top of the Philippine Arts Festival, the NCCA’s flagship event to celebrate NAM; he is also vested with the  duty to steer Philippine arts and culture to a fruitful and stellar direction.

Since taking on the NCCA chairmanship in 2011, De Leon has been indefatigable in promoting Filipino culture, defining and explaining it to as many people as possible, and supporting its development to realize its full potential.

Composer, scholar, professor and cultural administrator, De Leon has had a long history with the NCCA. In fact, he was one of the key personages that spurred the creation of the agency in 1987, and he served different positions and in different committees. He was head of National Committee on Music and Subcommission on the Arts, 2004-2007. He also became commissioner of the Subcommission on Cultural Communities and Traditional Arts (SCCTA), 1992-1998.

Culture is not only his line of work. It is also, one may say, in his blood. Well-known is the fact that he is the eldest son of National Artist for Music Felipe Padilla de Leon. But more than that, many members of his family on both sides were into the arts, especially music. His great-grandfather, for example, is Ladislao Bonus, the composer of the first opera ever written in the Philippines.

De Leon grew up in households full of music and culture in the districts of San Miguel and Pandacan in Manila. When he was born and because he was their first grandchild, his excited maternal grandparents took him to live with them in San Miguel, a few meters from Malacañang Palace. His grandfather was the secretary of the Senate of the Philippines, and his grandmother was Benilda Bonus, daughter of Ladislao Bonus, who composed the two-act “Sangdugong Panaguinip,” the first Filipino opera presented in 1902.

During the Second World War, when his grandfather was out of work, Benilda supported them by teaching piano and sewing until his grandfather died in 1945. He was 5 years old then.

At the age of 13, he came to live with his parents in Pandacan.

“Our house was a veritable, informal concert hall,” De Leon said.  “My mother (Iluminada Bonus Mendoza) was a pianist, a piano teacher. And she studied up to the MA level in piano. She was a concert pianist and a very popular accompanist for many singers. That was why when there was an occasion, parties, there were always performances.

Every Saturday, students from the Philippine Constabulary were at their house. During that time, almost all army headquarters had a band, and band directors would be at their house to train and to discuss music theory. At the same time, piano students of his mother would play and his father would comment. Sometimes they would have a whole orchestra over, and they the children would copy music sheets for them.

“Even when there were no visitors, my father would write music late at night until the wee hours of the morning, and had them performed by my mother,” De Leon said.

That was his “musical awakening” and development, and he eventually became a composer and music scholar, who has written music for plays such as the adaptation of the Rizal novel “Noli Me Tangere” and songs such as “Lumuha Ka Aking Bayan,” with lyrics by National Artist for Literature Amado V. Hernandez. He also composed several hymns for institutions, including NCCA’s. He has also done many studies in Philippine musicology.

Pandacan, the home of many musicians and artists, was an idyllic district then. Pandacan was pastoral and taught him love of nature and art. (Of course all of that is gone now in the polluted and chaotic Pandacan at present.)

“That started my interest in Philippine culture. I looked back at the past. I discovered many things. I studied Rizal’s annotations of ‘Sucesos de las Islas Filipinas’ (1609) by [Antonio de] Morga. I read primary sources on Philippine culture and history, those written by Teodoro Kalaw, Guillermo Tolentino. Later, my father brought me to the house of Guillermo Tolentino. The National Artist for Sculpture was the No. 1 proponent of the baybayin. He taught me old Tagalog. Old Tagalog is more poetic than modern Tagalog. The earlier you go back, the more poetic it is.”

His father was teaching and helping band directors in the Tagalog provinces, and frequently brought his children. Felipe Jr. became exposed to folk culture, and became enamored with folk traditions, such as those practiced during the Holy Week and Undas, whenever he went to Peñaranda.

De Leon became interested in different kinds of music. Since 1960, he started doing research on folk songs and folk literature, beginning in the north, in the Ilocos Region and then going to different parts of the country.

When he was a student at the University of the Philippines, he became an apprentice to ethnomusicologist José Maceda, and accompanied him to field researches, exposing him to different indigenous cultures. His interest in musicology deepened and his knowledge of different cultures of the Philippines widened, aside from the lowland folk cultures.

This deep respect and love for indigenous cultures would translate into landmark programs and laws. He spearheaded the institutionalization of the Gawad sa Manlilikha ng Bayan (National Living Treasures Awards) in 1993 and became its chair from 1993 to 2007. The Gawad sa Manlilikha ng Bayan is the national government’s honor and recognition to Filipino traditional craftsmen whose skills have reached a high level of technical and artistic excellence, and who are tasked to pass on to the present generation knowledge threatened with extinction. The awards equal the National Artist Awards, given to practitioners of the classical arts.

When he was head of the NCCA’S Subcommission on Cultural Communities and Traditional Arts from 1992 to 1998, he established the Schools of Living Traditions in 1995, a program intent on perpetuating knowledge on traditional performances, crafts, oral traditions and indigenous language. He also helped create a system of equal representation for the indigenous peoples to ensure their empowerment and active participation in cultural decision-making.

De Leon also led the process responsible for having the Ifugao chants hudhud and the Maranao epic “Darangen” proclaimed by United Nations Educational, Scientific and Cultural Organization (Unesco) as Masterpieces of Oral and Intangible Heritage of Mankind.

“What is the genius of the Filipino? I focused on Filipino identity,” he said. “It’s not really nationalism but the things that help liberate the human potential of the Filipino. My drive is still humanistic.”

These are ideas he is now translating into the NCCA, especially establishing the principles of culturally rooted governance or management for sustainable development in the context of Philippine society; championing a holistic world view that integrates spiritual principles with psychophysical health and social well-being; and developing the use of the arts as instruments for understanding the culture of the people.

“In the NCCA, I’m really following this humanistic bent,” De Leon said. “NCCA should liberate the potentials of the Filipino so that the Filipino can be a leader for human well-being, social well-being. That’s why I helped incubate the vision that Filipino culture is the wellspring of national and global well-being. We have many things to contribute to the world. We should be proud of our culture.”