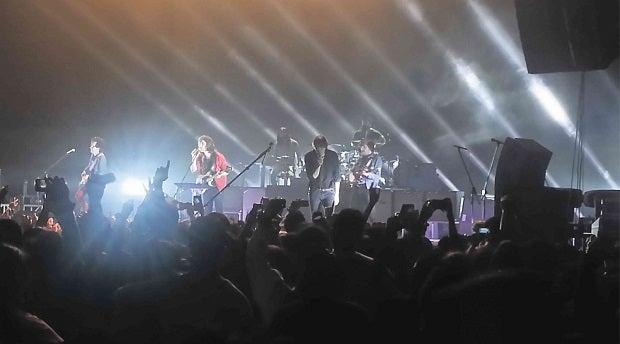 It was the type of concert that you wouldn’t want to miss—especially if you happen to like European alternative rock, in the mold of The Cure but more frenzied in an upbeat way.

On a Tuesday night, more than 5,000 kids (including those way over 40 years old with a youthful mind) converged at Pasay City’s World Trade Center to watch Phoenix—a French band whose songs have probably never been played on mainstream radio in these parts. But judging by the intensity of the adulation of its Filipino fans, it was obvious that the four-member group (supported by two sessionists) had achieved rock-royalty status.

But Phoenix is not composed of smug, self-conscious stars. Right from the opening number, “Entertainment,” a track from its 2013 album “Bankrupt!,” the concert venue shook with the band’s dizzying energy. Thomas Hedlund’s tribesman-on-speed drumming was the fuse that sparked much of the music’s relentless rhythm. Deck d’Arcy (bass), Laurent Brancowitz (guitar, keyboards) and Christian Mazzalai (guitar) kept close to the rapid-fire beats, never attempting to do a solo ad lib. Jumping on that exhilarating joyride was lead singer Thomas Mars, whose lyrics were hard to discern for the first-time listener, but nonetheless moving and persuasive.

In hindsight, most of the songs in the setlist—taken from the band’s five albums to date—were not so much memorable for their words, but somehow exciting to hear mainly due to their New Wave or postpunk character. In other words, we liked Phoenix because the sound of its music created a compelling mood that translated to a lust for life in the face of desolation and difficulties.

There were moments when the rhythms seemed to hover on the monotonous and the ecstatic crowd was on the verge of being drained out; but we took it in stride, thinking that real life is just like that, punctuated by, if not full of, droning moments.

While trying to sneak in backstage to have a closer range to take photos of the action, a friend who was part of the production told us that tickets had been sold out a few weeks before the concert date and that the youthful promoters probably made money since Phoenix was not an expensive band.

That can only mean good news to the concert audience, specifically those who thirst for bands who are not too geriatric or whose original members are still intact.

If you notice, most of the oldies gigs are now being held in casinos, not in big venues where promoters suffer big losses because the crowd has wisely chosen to stay away.

Now let’s see if the coming music festivals would pull in enough kids to fill up an open field.