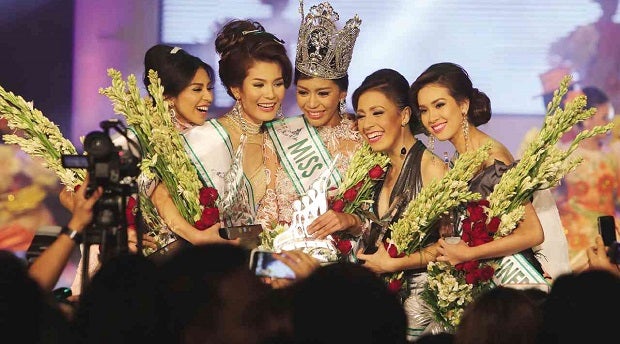 In 1984 the Cebu City Tourism Commission initiated the search for Miss Cebu Tourism. The beauty contest coincided with the city’s annual celebration of the Sinulog festival in honor of Santo Niño de Cebu.

The beauty title has since metamorphosed into Miss Cebu. The contestants don’t wear bathing suits. They have become prettier and wittier with every passing year.

It was a bumper crop of pulchritude this year, with 12 stunning finalists. The choice was narrowed down to five, and from there the chosen one was proclaimed. The crowd had a favorite but they were in for a surprise.

Miss Cebu 2014 is Diane Muego, a political science student from the University of the Philippines Cebu College. She turned 20 the day before the contest, and admitted it had been her birthday wish to win. Wish granted.

The two key questions she had to answer were seemingly up her alley. “It’s absurd,” she said of the proposal of Cebu obtaining separation (call it independence) from the rest of the Philippines. She went on to enumerate the reasons.

That was a question taken from a bowl of queries formulated by the contestants themselves. Then there was a common question for the five finalists put forth by the judges themselves. It had to do with how to bring hope to those affected by the recent Supertyphoon “Yolanda.”

Her family being from Ormoc, one of the devastated cities in Leyte province, Diane has been involved in relief work, in particular with the fisherfolk. As anyone who has suffered in this disaster knows, it will take months, even years, to rehabilitate the damaged areas.

Diane was crowned with a towering diadem of sparkling gems by Cebu City Mayor Michael Rama, and her predecessor Namrata Neesha Murjani who was much applauded during the several walks she was asked to do onstage earlier in the program.

Everyone expected first-runner up Eva Patalinjug to win the coveted title. That evening alone she had bagged a trove of titles, sashes, trophies and bouquets of flowers. These included: Miss Photogenic, Miss Friendship, Miss Megaworld, Best in Evening Gown (by Ditas Rodriguez), and “Kapamilya” Star of the Night.

Any of the girls could have been Miss Cebu, in fact. Take a good look at the runners-up: Hannah Marie Gore, Grace Anne Yap and Crystal Star Aberasturi—stunners all.

The other contestants were, in order of appearance: Rhodz Aloyon; Ayn Inking whose gown was cited as the best, by Marichu Tan; Margret Manolop; Kristie Barbas; Jennifer Montecillo; Natasha Manuel; and Pearl Hortelano.

The contest was held at the grand ballroom of Waterfront Cebu City Hotel, literally filled to its rafters by an enthusiastic crowd that reacted—the loudest roars came from the balcony section—to every detail or nuance on stage.

Carlo Sainz, the hotel’s officer-in-charge, was most visible, greeting everyone as they arrived. Welcoming all was Jaja Chiongbian Rama, dressed in flaming red, and perfect in her role as the Miss Cebu project chair. Not far was her vice chairperson, Philip Rodriguez.

They are very much a part of the Cebu City Tourism Commission whose chairperson is Phineas Alburo, who was present as well as other members like Councilor James Cuenco, Joan Tiu, Tetta Ba-ad, Marissa Fernan, Hans Hauri and Alice Queblatin. Add to them the top personalities of the city’s Tourism secretariat, Cinbeth Orellano and Anna Quisumbing.

Before the show, a beaming Mayor Mike Rama went about shaking hands with many, and most especially with those who, 30 years ago, instituted the beauty search.

The founders present at the 2014 contest were former Cebu City Vice Mayor Renato Osmeña, with his wife Marivic Mila Espina, who had written the contest jingle with Mel Libre; Nelia Neri with husband Julius Neri; and Monette Aliño.

The program was interspersed with performances by the talented Knapsack dancers. Much applauded, too, were singers Kate Torralba (yes, the designer), Annette Osmeña, and the debonair Pierro, who serenaded the beauties as they glided in their formal gowns.

Judges were all from out of town: fashion designer Jojie Lloren; photographer Xander Angeles, who is based in New York; Megaworld VP Mariecor Manlangit; TV host-actor Bobby Yan; and Georgia del Rosario of Metro Society magazine.

Winners of past Miss Cebu contests as well as runners-up and finalists had their moments of glory as they were asked to parade onstage in shimmering gowns. It was a veritable fashion show.