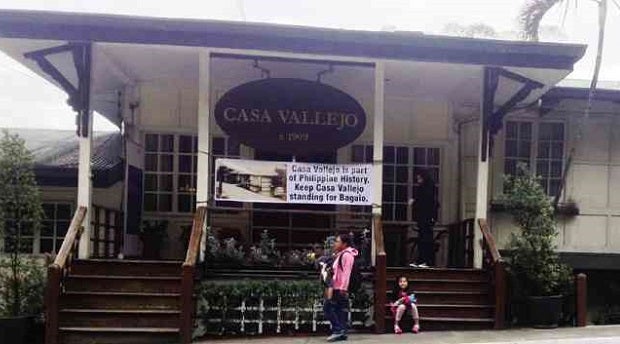 BAGUIO’S heritage conservationists are fighting tooth and nail for the preservation of Casa Vallejo, the city’s oldest hotel, following a controversial ownership claim made by an indigenous family that said the land where the structure stands belonged to it “since pre-Hispanic times.” Vallejo regulars fear the claimants will demolish the property before selling the land to a condominium developer. PHOTO BY NIDA AVANCEÑA

What’s behind the surprise eviction notice of Casa Vallejo?

BAGUIO CITY—Thank the exceptionally nippy weather here for cooling down tempers after the women running the century-old Casa Vallejo (or Vallejo Hotel) received an eviction letter telling them to leave on Jan. 14.

“We were all busy during the holiday season, from Dec. 24 to Jan. 2.  Then all of a sudden we get an eviction letter from the NCIP (National Commission on Indigenous Peoples),” said Mitos Benitez Yñiguez, who operates the globally renowned Hill Station restaurant in Casa Vallejo.

The eviction notice issued on Jan. 3 followed the NCIP’s issuance of two certificates of ancestral land titles (CALTs) to an Ibaloi family reportedly claiming that the land where Casa Vallejo stands has belonged to it “since pre-Hispanic times.”

Reports said the heirs of Cosen Piraso, represented by a certain Richard Acop, filed a petition before the NCIP only on Oct. 22, 2013, asking for a writ of possession over Casa Vallejo.

Already, the commission granted Piraso’s heirs’ petition. Yñiguez and associates were told they would be evicted from Casa Vallejo on Jan. 14.

As expected, Baguio’s culturati raised a howl.  On the day Casa Vallejo was supposed to close, friends, regulars and supporters camped in front of the hotel entrance to express their indignation.

Rumors that the so-called “owners” planned to demolish Casa Vallejo and sell the 2,600 sq m where it stands to a condominium developer fueled more outrage.

As it is, Casa Vallejo is one of the few remaining bastions of colonial charm in a city being swallowed fast by the lethal combo of uncontrolled urbanization and overpopulation.

Baguio’s old-timers are peeved at how vulcanizing shops, fast-food chains and sidewalks strewn with cheap souvenirs stand side-by-side with old houses and buildings that create the “Baguio atmosphere.”

In many conversations, blame is heaped on the succession of mayors who allegedly allowed the disfigurement of Baguio to happen.

‘They sneaked up on us’

“They sneaked up on us,” Yñiguez said of the NCIP memo.  “These people claiming the property have never shown their faces to us, ever.”

Yñiguez also wonders how the NCIP got into the picture, since they who have run businesses in Casa Vallejo since 2010 have a lease contract with the Department of Environment and Natural Resources (DENR).

“They (environment officials) have always been the ones leasing this land. And prior to the remodeling of Casa Vallejo, they used to hold office in the areas in Casa Vallejo where the Baguio Cinematheque and the New Haven Spa are located.  This was the DENR office,” she said.

Padma Perez, who runs Mountain Cloud bookshop in Casa Vallejo, noted that the old office of the Protected Areas and Wildlife Service and the National Mapping and Resource Information Authority, both environment-concerned agencies, were also housed in Casa Vallejo at one time.

“I used to be able to buy topographic maps here. We don’t know bakit biglang pumasok ang NCIP.  They just suddenly declared that this is ancestral land,” she added.

Casa Vallejo’s interesting history is narrated in a two-page petition to declare the structure as a heritage site that is addressed to chair Serena Diokno of the National Historical Commission of the Philippines (NHCP).

Built in 1909 out of wood, galvanized iron and sawali, the structure along Upper Session Road was initially referred to as Dormitory 4 and housed American workers who helped build Baguio City, according to plans laid out by that era’s colonizers.

The dormitory was leased in 1923 to Salvador Vallejo, a Spaniard who married a Filipino and was the grandfather of Manila Times columnist Maria Isabel Ongpin.

Vallejo opened a hotel named after him, and made dramatic improvements on the former Dormitory 4.

Ongpin, who chairs the Pine Cone Movement that is at the forefront of efforts to save what is left of Baguio City’s natural resources, said her mother Justina Vallejo Garcia helped the elder Vallejo manage the hotel after she was widowed.

This meant Ongpin and her siblings were regular fixtures in the hotel.

Government records show that the land where Casa Vallejo stands is owned by the DENR and administered by the Natural Resources Development Corp (NRDC).

Ongpin said that until the time of President Fidel Ramos, she was involved in running Casa Vallejo but was discouraged by the DENR’s inconsistent policy on leasing periods.

Initially, Casa Vallejo was granted 10-year leases by the government.  This was later reduced to five-year agreements, and later to one-year contracts that made it uncertain for anyone engaged in the hotel business wanting to proceed with investments.

In an interview at the Manila Golf Club, Ongpin said they returned the property to the DENR. “I said, ‘You want it? Take it!’ The DENR officials didn’t know what to do.”

“For seven years nandun ’yang Casa Vallejo, nabubulok. ’Yung mga tao stole the new wood I put in it.  All of Baguio was so angry that every time a DENR representative appeared in a public forum, they would attack.  ‘Why did you do that to Vallejo Hotel?’ They saw the light and gave a long lease to Roebling Company,” Ongpin said.

“I’m very happy they remodeled it. It’s very nice.  Then they subleased the restaurant to Mitos.  She’s doing very well. I am very happy,” Ongpin said.

While a court case has yet to happen, Baguio residents point their fingers at land-grabbing syndicates for Casa Vallejo’s woes.

During the interview, Ongpin produced copies of what appeared to be dubious “original certificate(s) of title” allegedly issued by the Land Registration Authority that were bandied about by a real-estate company trying to sell the land where Casa Vallejo stands.

Ongpin’s papers included an “acknowledgement receipt” addressed to a prominent Baguio-based businesswoman that the group was apparently trying to dupe into buying the Casa Vallejo lot.

Inquirer Lifestyle called the numbers on a business card of the real-estate company located along Bukaneg St., Barangay Legarda-Burnham.

The woman who answered was evasive when asked about the company’s efforts to sell the hotel lot, adding she was only an agent.

The woman said she would give Inquirer Lifestyle the landline numbers of the company, but never did.

Conchitina Sevilla-Bernardo, who has a property inside Camp John Hay, acknowledged efforts of groups issuing “spurious titles of ancestral lands.”

“They now want to take the Vallejo Hotel. We’re fighting a war there. Baguio is going haywire,” she said during an interview in her Makati residence.

Bernardo said Casa Vallejo’s plight strikes a sensitive nerve because “we all had memories of that hotel. Maribel grew up in that hotel.  It’s a Baguio landmark, and in comes this family that says they own it?”

Bernardo added that the Pine Cone Movement regularly receives e-mails “from people who are indignant” at what is happening to Casa Vallejo.

While Inquirer Lifestyle tried to get the side of the Ibaloi family, parties interviewed for this story could not provide access numbers.

A Baguio city hall employee only referred to a news conference covered by local newspapers two weeks back where Piraso’s heirs asserted their private ownership of the lot where Casa Vallejo stands even before the Spaniards arrived.

Part of the statement issued to media read: “Despite the subsequent administrative and executive issuances making Casa Vallejo what it is today, the character of the land beneath it did not change.  The land remains of private ownership.”

To complement the petition declaring Casa Vallejo a heritage site addressed to the NHCP, the Baguio city council is set to hold hearings on a proposed resolution urging the commission to do so.

Meanwhile, the Office of the City Legal Council maintained that Mayor Mauricio Domogan supports all moves to preserve the hotel.

Domogan would not answer calls made by Inquirer Lifestyle. However, the city hall’s media office gave a copy of a local newspaper where the mayor was quoted, saying he plans to question CALTs issued by the NCIP, especially to those “properties which are already titled and even owned by the government,” as in the case of Casa Vallejo.

Ongpin is convinced there are those who are abusing the Indigenous People’s Rights Act of 1997 (RA 8371) that supposedly protects members of indigenous groups from land-grabbers.

She noted that those engaged in the seemingly irregular titling of lands using the IPRA specifically target those owned by the government, since there is a greater chance of success.

“These parties leave alone lands that are privately owned and titled because they know the targeted victims will fight back,” Ongpin said.

Ongpin then referred to efforts being made by Mary Grace Bandoy, a researcher-activist heavily involved in the initiative to declare the entire city of Baguio as a special heritage zone.

In an e-mailed statement, Bandoy told Inquirer Lifestyle that colleague Dion Fernandez was the author of the original petition begun in 2003.

While Fernandez’s move earned support from the Heritage Conservation Society, “unfortunately it got stuck in the Baguio city council during that time,” she added.

Bandoy said she edited Fernandez’s original petition and re-circulated it.

“Our target is just to get at least 500 signatures to complement the 2003 petition and have it submitted to the Office of the President,” she noted.

In her e-mail, Bandoy also said their efforts are spurred by observations that Baguio’s “over-development and nonpreservation of the culture and heritage” is a result of “corruption in our local government and in other government agencies concerned with land disposal and developments.”

Bandoy, who described herself as an “anti-graft and corruption researcher,” singled out the DENR, NCIP, the Register of Deeds, Bureau of Lands, and the Housing and Land Use Regulatory Board for the situation.

“They are welcoming and unscrupulously allowing all forms of development in the city, whether these are legal or illegal, with no sense or notion of land use and urban planning whatsoever,” she exclaimed.

“As long as there are no preservation or conservation measures put in place, the over-development and environmental degradation of Baguio will continue to happen, thus our immediate call to declare Baguio a special heritage zone,” Bandoy added.

Meanwhile, Vancouver-based accountant Wanda Rojo sits in a quiet corner of Hill Station’s dessert station, multitasking between breakfast and work in her laptop.

“I have been coming back to Casa Vallejo since 2010 when the improvements were made.  This place makes anyone proud to be a Baguio resident and invite guests over,” she said.

Rojo was visibly shocked when informed about the near-eviction a week back.

“If this is taken away, they would take away something valuable.  Baguio will lose its character,” she warned.