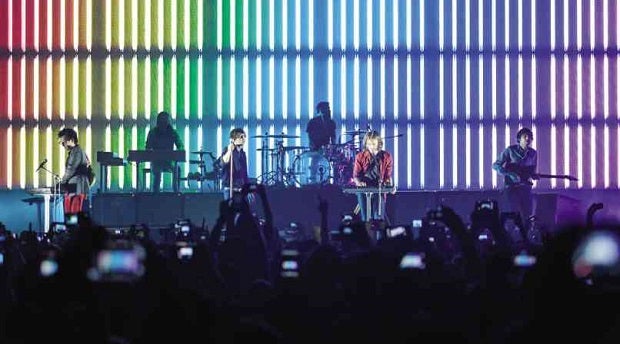 “Does it bother you when people sing the wrong lyrics?” we asked the members of alt-rock band Phoenix at its press conference at the Diamond Hotel. The room erupted into giggles.

“No, it’s fine,” replied front man Thomas Mars with a smile. “We like misunderstandings; we embrace them.”

Thanks to the band’s penchant for repetitive, quirky, often obscure lyrics, even longtime Phoenix fans have been guilty of making up the words at some point. For some, the French quartet’s repertoire brings in a wealth of funny memories: the loud, cringe-worthy sing-along sessions during road trips; the countless arguments over how many “heys” and “wells” there are in the band’s hit singles “1901” and “Girlfriend,” respectively; and the semidrunken nights of trying to dissect the meaning of the songs, to no avail.

The band’s trippy tunes and Mars’ breezy vocals might belie the melancholy sentiments hidden in those lyrics; but the music leaves you feeling good even if you don’t know what Mars is really singing about.

Alongside Air, M83 and Daft Punk (whom they’re childhood friends with), Phoenix is one of the few French acts who have successfully broken into the global pop scene of late.

Formed in 1999, the Versailles-based band first gained notice in 2003 when its single, “Too Young,” was featured in the film “Lost in Translation,” directed by Mars’ then-future wife, Sofia Coppola.

Phoenix then achieved international success in 2009 with its Grammy-winning fourth album, “Wolfgang Amadeus Phoenix,” which spawned the synthpop tunes “1901,” “Lisztomania” and “Lasso.” The band is currently on tour in support of its latest offering, “Bankrupt!,” with the frenetic, Oriental-inspired track “Entertainment” as its carrier single.

This tour marks the quartet’s first-ever visit to our shores. But interestingly, the boys have some local memories of their own. Guitarist Laurent Brancowitz has a few records of Freddie Aguilar from when he was a kid (“I really loved the covers. Guy with long hair and black shades… He looked cool,” he recalled with a grin), while Mars has a tape of his wife singing “Lupang Hinirang” at age 5 when she was in the country with her father, Francis Ford Coppola, for the filming of “Apocalypse Now” in 1979.

Being virtual strangers to Asia, have they ever felt lost in translation while on tour?

“You feel those moments, you know, like being too tall in the shower and things like that,” Mars chuckled. “But we (also) feel the good moments, the sweet misunderstandings, so it’s more of a good thing than a bad thing. We’re happy to be lost, to have those moments when we don’t judge and understand everything. Just lost.”

With nearly 20 songs bookended by “Entertainment,” it was a tight, seamless set that left fans giddy and breathless from start to finish. New singles “Don’t,” “S.O.S. in Bel Air” and “The Real Thing” meshed perfectly with old favorites “Too Young,” “If I Ever Feel Better” and, of course, majority of the “Wolfgang” tracks.

If anything, it showed that the band hasn’t strayed from its winning formula, which is a good thing as far as loyal fans are concerned.

“We don’t want to follow the same recipes so we try to change them, [but] we don’t really long so much to destroy the previous rules. So, each time, it’s the same story of trying to do it differently,” said Mars.

The band also threw in a few tricks, such as “Sunskrupt!,” a mesmerizing mashup of instrumentals “Love Like a Sunset” and “Bankrupt!,” against a fiery orange backdrop; a lovelorn acoustic version of “Countdown” in which Mars sat down and serenaded the lucky ladies at the front rows; and, for the encore finale, a reprise of “Entertainment” where the front man crowd-surfed all the way to the back to personally thank the fans, after which confetti streamed down on the whooping crowd.

Phoenix may be composed of seasoned performers, but the band wasn’t prepared for the famous Pinoy sing-along power or the massive reception it got from the thousands of screaming fans that Tuesday night. Mars looked utterly blown away as the crowd belted out the chorus of “Lisztomania” word for word, prompting him to exclaim, “Oh, my God,” while the rest of the band looked on in amazement.

“For us, it’s the best compliment you can give if you sing,” explained the vocalist at the presscon. “It’s a rare thing when it comes to our music, because the lyrics are very strange and not very sing-along, so it makes it even better.”

It warms the heart to know that fame and success haven’t gotten into the boys’ heads; in fact, they’re still overwhelmed by it. “They couldn’t believe that the Manila show was sold out. When they entered the venue for the sound check, they found it so big that they were worried they wouldn’t be able to fill it up,” said the concert’s promoter, Karpos Multimedia cofounder Stephanie Uy.

Just as Phoenix wowed the Pinoy crowd, Manila has obviously made quite an impression on the Frenchmen. According to Uy, the band was eager to explore the old and new Manila during its brief stay, and wasted no time in posting photos of its kalesa ride and trips to Intramuros and SM Mall of Asia on Instagram. At one point, the guys were heard singing “Bibingka-mania” as a tongue-in-cheek wordplay on “Lisztomania.”

They play around with their own lyrics, too.