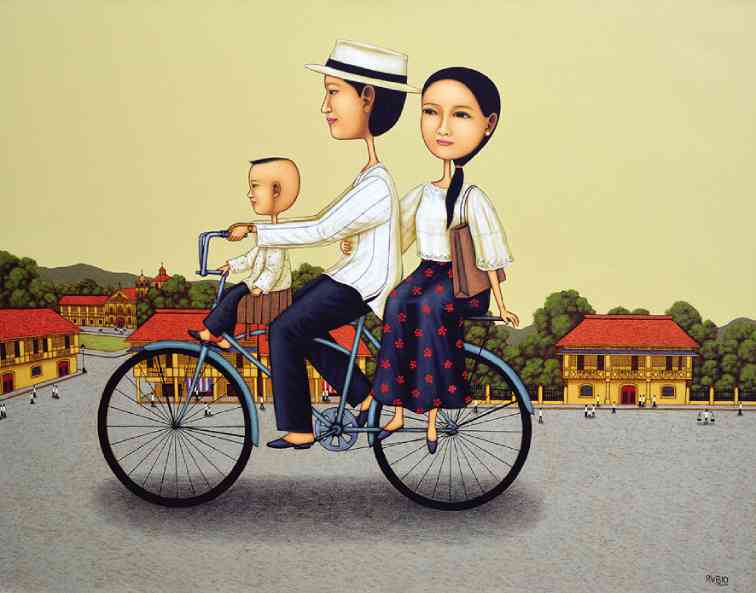 Dominic Rubio paints the past as present

It has been a long journey for Dominic Rubio from his Fine Arts studies at the University of Sto. Tomas to his advertising work, in which at one time he became resident artist of Pearl Farm, the upscale resort in Davao del Sur, and now to his full-time painter’s life.

It was during his work in Mindanao that he found time to learn more about the different tribal communities at the Caraga Region in Northern Mindanao, such as the Mandaya and T’boli tribes, as well as the Badjaos and the B’laans in Southern Mindanao.

He says he was already then sharpening his observation of people, their customs, traditions and manners of living, which would become the essence of his art today.

Art critic Reuben Cañete, in his article “Dominic Rubio: Valuing Heritage, Mirroring the Self,” zeroes in on one of the major reasons for Rubio’s success—his capability of making his collectors and his public “see themselves” through his works.

The past as present

Although he paints nostalgic scenes depicting our colonial past, Rubio is actually painting the Filipino today, says Cañete.

Rubio’s paintings, he explains, have “struck a deep chord of nostalgia among his publics, who recollect from these paintings memories of their own recent ancestry, as well as the nascent space of national becoming.

“Viewers retrieve from his paintings a dialectic sense of individual and collective identification that only helps to emphasize the significance of the established present.”

In a word, Rubio is painting the past as present.

Interestingly he uses genres originally developed by artists from our Spanish-colonial past, including the Tipos de Pais, a genre popularized by  such artists as Damian Domingo, the founding director of Academia de Dibujo y Pintura de Manila.

In pre-photography days, Domingo painstakingly observed the costumes and mannerisms, economic undertaking and concerns of the populace in 19th-century Philippines.

Rubio paints the taho or bird vendor, the  fisherfolk by  Pasig River, an illustrado woman promenading in Binondo or Escolta.

This is a subject truly close to the artist since he’s a  family man himself and the father of three children.

Among the artworks are “Carrosa,” “Bisikleta,” “Patungong Maynila (La Familia Filipina),” “Patungong Eskuwela,” “Salop ng Tubig,”  all of them showing family members involved in daily  tasks. They are all dressed in their finery and ready to go to the big city, preparing to take a trip to the market or  church.  Rubio is able to elevate the mundane to the extraordinary.

Cañete identifies another  colonial artistic technique availed of by Rubio. This is the Miniaturismo, in which “other accoutrements like combs, shoes, hats, rings, kerchiefs and fans,” and other accessories are presented in painstaking detail.

Cañete identifies artists such as Antonio Malantic, Justiniano Asuncion, Dionisio de Castro and Simon Flores as some of Rubio’s precursors. Rubio  lavishes particular attention and detail to his subject’s accessories and costumes as well as the architecture in his outdoor settings and the interiors in his indoor.

Another technique that has influenced the artist is the Recuerdos de Fotografo, or colonial photographs—mostly family portraits—recording the activities, concerns and reunions of households and families.

Art critic Cid Reyes praises  Rubio’s art as “arresting [for their] the punctilious application of pigment and the delineation of the figures… technically adept, Rubio displays impressive workmanship.”