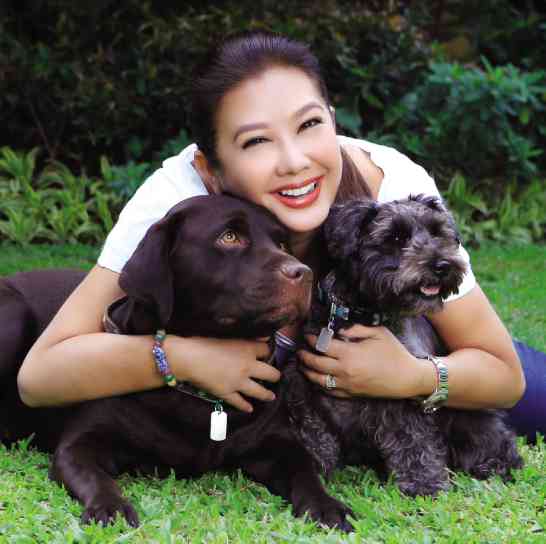 KORINA Sanchez with Kolette and Goya

If you’re a dog owner, you know that even a quick trip to the grocery store will still earn you a royal welcome from your furry friend when you get home.

They’re the first to greet you, giving you a wide-eyed, oh-my-God-I-can’t-believe-you’re-back look, pawing at your legs and following you around the house.

Here are some personalities’ relationships with these adorable creatures.

Simba, Tweetie de Leon’s four-year-old Chow Chow, is vain. Last summer, when the boy developed skin irritations from the heat, De Leon decided to shave off his coat. This hairless look apparently did not appeal to Simba.

“When he realized what had been done, he seemed sad and upset, and wouldn’t let anybody near him. He’s kind of vain pala,” De Leon said.

Four years ago, De Leon’s other Chow Chow, Bruce, passed away. She was devastated and swore she would never have a pet again, until she met the cream-colored Simba. This stocky,

muscular dog, whose thick coat forms a ruff around his neck, is now like a son to De Leon.

“He’s a steady-Eddie who loves to chill beside anybody who cares to have him around. He has mellowed a great deal since his juvenile years, when he was exceedingly rough and makulit,” she said.

Although he’s too huge to sleep in bed with De Leon, Simba does get to choose which room to sleep in at night. That freedom of choice, De Leon said, is her way of spoiling him. As always, he chooses the coolest room in the house, A/C turned up high, and slumps into blissful slumber on the cool floor.

Journalist Korina Sanchez was never a dog lover. She was no fan of anything “that peed and pooped,” she said.

One fateful day, she and husband, Interior Secretary Mar Roxas, was invited to the home of one of his classmates, a dog breeder. A toy Schnauzer had just given birth, and the breeder was looking for loving homes for the litter.

When one of its puppies, now named Kolette, was placed on her lap and gazed into her eyes, she instantly felt a connection.

“That was it. She was ours,” Sanchez said. She got another dog, this time a chocolate Labrador, and named her Goya.

One-and-a-half years later, Kolette and Goya, who started out having their own beds, now sleep on the bed with the couple. The big Lab sleeps by their feet, the little one snuggles next to either Sanchez or Roxas.

Kolette, she said, is the territorial alpha dog. She likes to playfully bite Goya’s ear, but the big dog has a big heart and never really retaliates.

“I think Kolette can’t accept she’s a dog. She doesn’t like looking at herself in the mirror. She thinks she’s human. One time, I could swear she tried to talk, and discovered she couldn’t,” Sanchez said.

“Like real kids,” Sanchez said, laughing. “I make sure they have tickle-time with me whenever I get a chance. Often before sleeping at night. It gets them more exhausted, and they sleep

TV host and actress Agot Isidro has three dogs—10-year-old Tyson, a chocolate Labrador; and Elvis and Jack, 6 and 3 years old, both Beagles.

“It’s true that a pet chooses you,” she said. Tyson and Agot were drawn to each other. The Lab was busy biting his mother’s ear when Isidro first met him, she recalled, and that earned him the name Tyson (after the American heavyweight boxer, Mike Tyson, who is infamous for biting off Evander Holyfield’s ear during a match).

The playful Beagle was named Elvis because, Isidro said, “he ain’t nothing but a hound dog.” Jack is one of Elvis’ sons, named after the White Stripes vocalist, since he has a thin white stripe running vertically along his neck.

“And they know me as Mama,” Isidro said.

She takes all three on vacations to various resorts in the country; they even go swimming in the pool where it’s allowed. Every morning, they get their daily treat of bread and bananas.

“My dogs do not eat kibble, or packaged dog food. They have prepared food from ground beef (people grade), vegetables and rice. My Tyson is 10½ years old, but he is still strong and looks young,” she said.

“Gavin is my son, and the only son I will ever have. I just knew from the first time I saw him that he was the one,” singer and actress Rachel Alejandro said of her seven-year-old Shih Tzu

She and Gavin don’t go out so much, but when they do they visit Alejandro’s grandmother, where the boy plays with other dogs. She can’t take him on vacations, she said, because her husband, Spanish journalist Carlos Santamaria, is not fond of dogs.

Gavin, however, is very friendly and loving, such that even people who don’t like dogs end up loving him. “Except my husband,” she said. When people meet Gavin for the first time, they call him either “fur ball” or “Ewok,” since he resembles the Star Wars character.

“He is so well-behaved and quiet. He never barks at anyone. When I come home, he gets super excited and runs to the door to greet me. He is like that with everybody. He is just a really, really good-hearted dog. I am so lucky to have him. He makes me very happy. I hope he knows how much I love him even if I’m too busy to bring him around with me.”

The daughter of actress Zsa Zsa Padilla, who, just days ago, announced her engagement to Spongecola vocalist Yael Yuzon, is absolutely nuts about her Shih Tzus Lucky and Vicekee.

Lucky, 4, is the offspring of Kung Fu, a dog who got lost when he ran out of their house’s gate to chase a cat. Vicekee, 1, was a gift on her birthday last year. Vicekee is her first female dog. “I didn’t know that females get extremely excited each time they see you and want to be with you,” she said.

Karylle, who loves to run around Bonifacio Global City, often takes the two Shih Tzus with her. If they can’t keep up with her anymore, they wait for her in one area in the park—with a yaya to look after them, of course. More often, though, the dogs go with her to her charity events.

“They both attended the Three Kings party at the White Cross last January. Late last year, Lucky also went to visit the kids at Child Haus (a temporary shelter for indigent patients who have cancer or other life-threatening diseases). It’s my dream to have a doctor dog someday,” Karylle said.

This actor from the teleserye “Honesto” received a birthday gift last year, a Golden Retriever he promptly named Goober. Goober, now 6 months old, and Marco watch movies together at home, or walk the streets together at night.

“Goober is like a dream come true. I’ve always wanted a big dog. He’s my baby boy. Sometimes he sleeps in my room and we cuddle,” he said, laughing.

A commercial model and one of ABS-CBN’s contract stars, Raphael Robes had no intention of buying a dog, but when he saw a Bichon Frise  puppy, he was so smitten he had to take him home. Now, 1-year-old Alexa, like daddy’s little girl, demands constant attention.

“I’m an overprotective father. If she were my human daughter she’d probably end up a rebel,” he said, laughing.

“You cannot look at any Malamute puppy and not fall in love. They are cute and so fluffy! And when they mature they look so regal and majestic,” said Christina Isorena, who runs BetterDog Canine Behavior Center with husband Jojo, a renowned dog trainer and behavior specialist.

She treats Nike like her first furry son, although she has developed the discipline to not spoil the big boy.

“I do not overindulge my dogs with toys, treats or attention, but they can get that from me on my terms. I just need to provide them their needs. I decide to grant them some privileges, such as going up on furniture or your bed and just being silly, but only when I say so. I learned that you must reward only the good behavior. It’s not easy to be married to a dog-behavior specialist,” she said, laughing.

This 19-year-old Finance student is a member of Chinito, a sing-and-dance group composed of 2013 Mr. Chinatown candidates that was formed by Johnny Manahan. His dog, Diego, a

Siberian Husky, was “the most special gift I’ve ever received,” said Du.

They jog together, with Diego unwittingly helping keep his BFF fit. Du wants to make running a habit, and Diego keeps him on his fitness regime, because for now that’s the only quality time the busy student can have.

When her 2-year-old Pomeranian BoomBoom  passed away last year—the poor dog, who was born with an enlarged heart, was so stressed out from barking one stormy night last year that he suffered a cardiac arrest—fashion designer Michele Sison got a surprise gift from a friend. It was a mini-Pomeranian, an actual half-brother of BoomBoom.

She couldn’t resist the charming little dog. When the dog carrier’s lock opened, he instantly ran to Sison’s arms.

“That was charming; I felt we connected right away. I think he is a healthy reincarnation of BoomBoom,” Sison said.

Basti, the new Pom Sison calls her fur-brother/fur-son, goes to work with her. He plays catch and likes being photographed. He is quicker than a doorbell, running to the door before a visitor can even knock. Like his mom, he eats healthy food, nibbling on dried apples and banana chips for snacks. When it’s cold outside, Sison wraps him in fleece or pashmina scarves.

“But I don’t really like dressing up my dog. I think they are beautiful in their own coats,” she said.

Now here’s a dog who loves to surf. Like his big brother, surfer instructor Luke Landrigan, River, 9, spends most of his time on the beach. Why not? He is, after all, a Labrador, and like all Labs he loves the water. He swims by himself when it gets a little hot.

“I believe dogs should never be tied up or live in a cage. The more freedom they have, the better they will be,” Landrigan said.

Landrigan is a pet lover. Growing up, he said, there was always a dog in their house. River was a gift. The owner thought the Lab would be better off living close to a large body of water. Landrigan doesn’t feel the need to travel with his dog. Waking up next to the beach is enough to keep River happy.