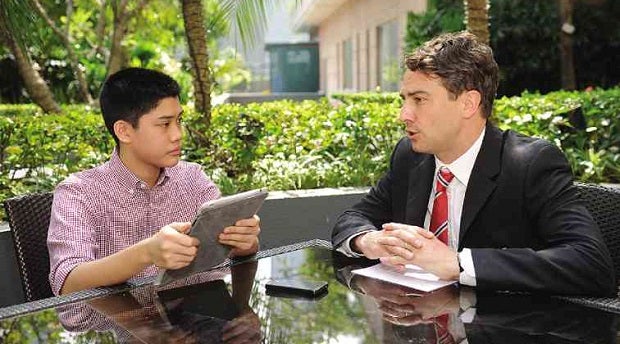 Dorothy Dee-Ching, Unilever marketing director for hair care, said in a recent press conference that, through the partnership, Clear would give the Philippine football community exclusive access to Manchester United to inspire and motivate fans and aspiring players alike.

The deal includes bringing to the Philippines the prestigious Manchester United Soccer School, which has produced the likes of Ryan Giggs, David Beckham and 2013 Ballon d’Or (Player of the Year) winner Cristiano Ronaldo.

The program, which includes a three-day football camp in Metro Manila, is open to all amateur male footballers aged 17 and above. Players will be trained by Union of European Football Associations-accredited Manchester United coaches.

United Football League officials and scouts will be present during the training to observe and critique players.

Clear brand manager Andrew Copuyoc confirmed that six of the 32 chosen footballers will also get the opportunity to play in this year’s Clear Dream Match 3 alongside the best of Philippine football.

Registration is ongoing till Feb. 28 at cleardreammatch.com.ph and at select schools.

We had a one-on-one interview with Jamie Reigle, Manchester United managing director for Asia and the Pacific.

At the Festival of Media Asia 2013, you said that 12.8 million Filipinos support Manchester United. You referred to that number of people as “followers.” What constitutes a Manchester United follower and how did you derive that figure?

We hired an agency called Kantar which does big research activities around the world, and we interviewed between 1,000 to 5,000 people per country… In the Philippines, we asked people two questions—“What’s your favorite team?” and “What other teams do you follow?” So you might say that you follow your local team, but then Manchester United is a team that you also follow. It’s the addition of those two numbers that comprises the 12.8 million in the case of the Philippines.

We’re not saying we have 12 million diehard fans who have a tattoo, but they’re aware of Manchester United and they follow us online, in the newspaper or on TV.

Why limit the football camp to those aged 17 and above?

Manchester United has a mission to improve the quality of football around the world, and we do that with local partners. For Clear it was very important that it was age 17 and over, although from our perspective it could be any age. It could be old people looking to get a good workout or young people. Because Unilever is driving the activity, however, we rely on them to make those decisions.

Is the camp open only to Manchester United fans?

It’s open to any footballer who wants to participate in the camp. We want to increase the quality of football in the Philippines, and ideally we want to recruit more fans. So, hopefully we can convince people, by letting them participate in this program, that Manchester United is worth following. We’re happy for fans of any club to participate.

How does the presence of clubs with longer relationships with Philippine football, like FC Barcelona and Chelsea FC, affect your program?

The other clubs you mentioned have done direct soccer schools already. We haven’t, and we have a different philosophy. We like to partner with local companies, or in this case an international company, to help roll out the program with a wider range in mind, rather than choosing to set up a permanent space and limiting it to only one area. The Chelsea and Barcelona schools, by definition, pick a place in the country, and it’s going to be much harder to get there if you’re not close to the school. We’re trying to take it into various regions to allow us access to a broader portion of the population. That’s true not just in the Philippines but globally as well. We can take coaches to China, Japan, Indonesia, the Philippines. We don’t have to pick just one place.

If the football camp turns out successful, would there be more programs to follow in the Philippines—not just for established footballers but also for Red Devil fans, who want to improve their game and play the Manchester United way?

Absolutely. I think we’re very conscious of the fact that this is our first activity in the Philippines. We know that we’re coming late, and so this will be a good test to see how successful things turn out. So, yeah, absolutely! If people in the Philippines are excited about it, then it gives us confidence that we should be doing more.