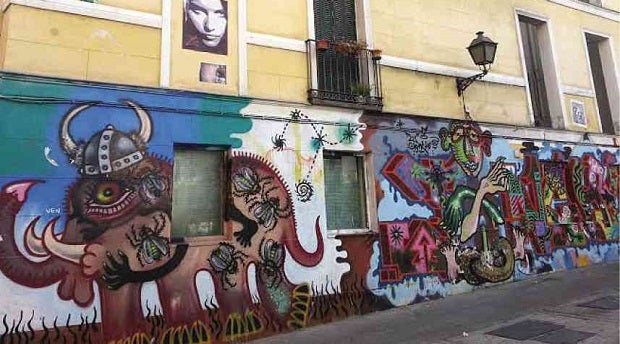 When my siblings and I were planning our big European trip last year, it was unanimous that the most time should be spent in Spain. Though none of us had ever been there, Spain held this certain allure that we couldn’t resist.

Even on our last day in Nice, France, before heading to Barcelona, we were already dreaming of a two-week love affair with paella, sangria and the tapas lifestyle.

We booked ourselves in a wonderfully spacious and tastefully decorated apartment in L’Eixample via airbnb.com. The location was perfect because it’s in a less tourist-laden area but only about 20-minute walk to places of interest such as the Sagrada Familia, La Rambla, and about 30 minutes away from Barceloneta and the more “local” area of Grácia.

It was fairly easy to navigate our way around Barcelona. Though public transportation would get us to places faster, the only way to really get to know a place is to walk and discover things along the way.

So, walk we did, using Plaça de Catalunya as our main landmark.

One thing to keep in mind in Spain is to never, for any reason, eat in a fastfood chain because there is delicious and cheap food all over.

Among the European countries we traveled, we spent the least amount of money in Spain for everything, from food to late-night taxi rides.

A favorite place to eat in Barcelona was Ciudad Condal along Rambla de Catalunya.

Its location might lead one to think that it’s another touristy restaurant, but our local friends swore by it and we definitely were not disappointed. Forget about doing a tapas crawl and just stay here to try everything.

If you are missing home, head over to Plaça Reial and look for the restaurant Les Quinze Nits. It has reasonably priced Spanish fare and an almost all-Filipino staff. Also, it is right under the office of the Philippine Consulate.

Those in the know can order Pinoy staples like sinigang and adobo and other things not on the menu.

If you are in a rush, pop into La Boqueria for a quick bite, and perhaps take a little more to go.

Allow yourself an afternoon to visit the Sagrada Familia, a large Roman Catholic church, and Park Güell, a garden complex, both designed by famed artist Antoni Gaudi. The twists and turns, curves and lines of these places literally made our jaws drop. Only the mind of a crazy genius could come up with such madness and get away with it.

My siblings and I felt like we were in a church designed by Dr. Seuss. And having finally seen it, I was in awe of how majestic the church is.

Gaudi’s influence is all over the city so don’t forget to look up once in awhile to admire the facades of buildings.

After soaking up the culture, hop over to Barceloneta for a quick dip and sunset drinks. We spent five days in this beautiful city, and it sure is the type of place one could be infatuated with quickly.

After the crazy whirlwind affair with Barcelona, Madrid seemed a little more the long-term commitment type, if one were to move to Spain. It has less tourists, and seemed to have a more “real life” vibe to it.

We got an apartment in the Malasaña district, officially named Universidad, which is pretty much hipster central, with lots of bars and restaurants and young people milling around late at night until the wee hours.

Aside from Parque del Retiro close to the Prado, Thyssen and Reina Sofia museums, I noticed the lack of greenery in Madrid. But what it lacked in parks, it made up for in plazas.

People in these plazas sit on the concrete and hang out and drink all night, and boy, do the Spanish love to drink!

These places usually have bars that sell drinks, but there are also street vendors selling beer.

You have a better chance of seeing people and getting a drink or something to eat at this time of day than any other time.

We know that the Spanish ate late, but from late morning until about 2 p.m., almost everything is closed unless you walk over to Gran Via which doesn’t take that long at all.

There are lots of places to eat in Madrid, but one safe and cheap option is Cervecería 100 Montaditos, which literally means 100 small slices of bread with “something” on top.

Its wide selection will satisfy any craving.

Grupo Andalina restaurants are also a good bet. Les Quinze Nits in Barcelona has a sister restaurant in Madrid called La Gloria de Montera, among others.

Again, for reasonably priced Spanish food and Filipino hospitality, visit one of these restaurants. My favorite place to eat in the city, however, is not a restaurant but a food market. Mercado San Miguel is situated near Plaza Mayor and the closest train station is Puerta del Sol.

It is a big, covered and air-conditioned market with booths upon booths of your favorite tapas, Spanish food and desserts. If you are not into doing a tapas crawl, you can opt to stay here and sample angulas, bocadillos, chorizo, paella, jamon, pimientos de pádron and more.

Indulge yourself in a few glasses of sangria and small bites of desserts like tocino del cielo and go home happily stuffed.

If you feel like taking a walk after all that food, do so at Plaza Santa Ana and find the side street where Viva Madrid is located. Open since the 1800s, it was the cafe frequented by Philippine national hero Jose Rizal during his years in Spain.

Don’t miss out on Palacio Real, the official residence of the Spanish Royal family, and its surrounding gardens. It’s a nice place to see, even from the outside.

Art enthusiasts should not miss out on the three main museums, but if you can visit only one, pick the Prado, which is said to be one of the most extensive and best museums in the world.

Lastly, don’t forget to take a stroll around El Rastro near the La Latina train station. It is the biggest and most popular open-air flea market in Madrid which has booths selling everything from secondhand knickknacks to real leather bags that still smell of the tannery. It is open on Sundays and public holidays and can get quite crowded.

Remember to keep your valuables close to you around this area.

After six days of the Madrileño lifestyle, it was time to go up north to the Basque region.

We had a Eurail pass to take us through our entire trip, and although it is more convenient to skip immigration lines, one must still be vigilant about watching out for his stop.

For instance, the six-hour train ride from Madrid brought  us to Donostia which, as it turns out, is the local name of San Sebastián. Good thing the man in the ticketing booth made sure to tell us that.

Upon arrival, it already felt different from the other parts of Spain we visited. One has to get used to all the TX’s and Z’s in the Basque language, and it was definitely less modern and more laidback then the cities we previously went to.

There were reasons why San Sebastián was a must in our itinerary. First, my Spanish friends told me that the Basque region has the best food in Spain and San Sebastián hosts three of the five restaurants in the country that have been rated three stars by Michelin.

Even if you can’t afford to eat in the Michelin starred-restos, San Sebastián’s  traditional pintxos (pronounced pinchos) bars satisfy completely as well.

Lastly, our family’s Spanish roots are in the Basque region, so it was a perfect opportunity for us to see what the place and its culture contributed to how we are, even in the smallest way.

I wish I planned more than just a three-day stay in San Sebastián. Although there was enough time to get a taste of it, such a short stay will definitely have me dreaming about going back there soon.

If I were to do it again. I would have stayed at least five days. The time we had was just enough for us to spend an afternoon on the beach, a visit to the aquarium and enjoy plenty of pintxos in Parte Vieja.

We were lucky enough to be there during the Heineken Jazzaldia or the Jazz Festival, where we enjoyed open-air concerts, “pocket” performances by local DJs, breakdancers and hip hop artists.

If you have the time and budget for food, visit one of the well-known restaurants like Arzak or Mugaritz. They require reservations though, so it is recommended that you plan this months ahead.

If you want something special without breaking the bank, give the pintxos bars a go. You’ll be in awe of the variety of little bites you can choose from, some of which are blessed with touches of molecular gastronomy that the region is known for.

San Sebastián was our second to the last stop on our two-month trip. From here, one can take the train to Irun and walk to the French border or Hendaye and be in Bordeaux in two hours, like we did.

It was a great two-week experience in Spain, and as soon as we hopped on that train to France, we were already making plans to go back.