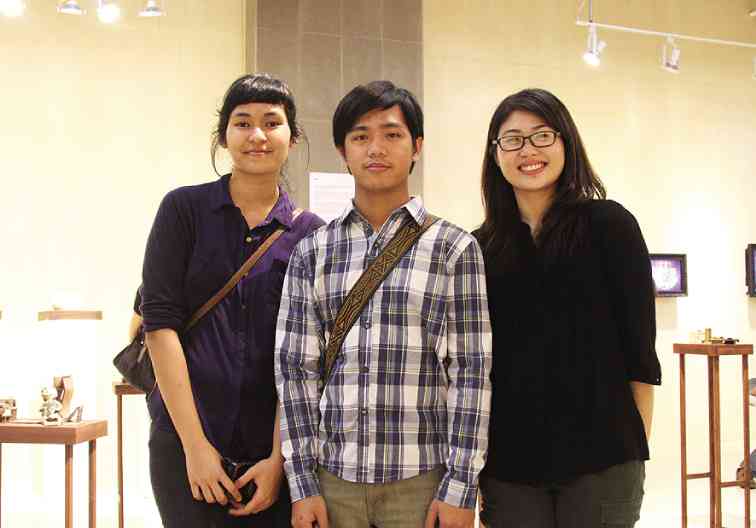 Young artists Joseph Gabriel, Issay Rodriguez and Jezzel Wee reflect on their lives after graduating from college in the exhibit “Point B,” at Altro Mondo gallery in Greenbelt 5.

Their works tackle the notion of their own homes, a place where they settled back after finishing their Fine Arts degree at University of the Philippines  in Diliman last year.

“In plotting their route for their journey to the real world, they decided to assign home as point of origin,” curator Dayang Yraola writes in her curatorial note. “It is where they started, and after the university lap, this is where they are headed back.”

Gabriel, who was an exchange student at École Nationale Supérieure des Beaux-Arts in Paris and the Painting delegate of the Philippines for the 2013 Asean Youth Camp, says he connects objects associated with work with the things found at home.

His resin sculptures link ordinary things with time and change, such as “8 Minutes” which depicts a tea set and “Sick O’ Clock” showing an alarm clock.

His artworks reflect on his past experiences as a college instructor and now that he’s back in the university enrolled in French class.

“I worked before as a teacher but I immediately quit. I’m currently enhancing my knowledge in French, but I am mostly at home,” he says. “I reflected on how I dealt with mundane things when I was a student and when I was working in the academe.”

Lines and light inspired by old photographs and memories are the basis of Rodriguez’ pieces. She says she got the idea from her mentor when she did an interesting gig as an art instructor for a clinic.

“My mentor advised me to review my life so that it would help me in handling my patients,” Rodriguez recalls. “When I had the time, I went looking at old photos at home and it resulted in these works. This exhibit is somehow a biography review.”

Her works are lightboxes titled “All You Need to Fly Right Now,” which projects a mother and a child holding tied birds, and “Taya,” showing a chicken with children dressed in bird costumes.

Rodriguez recently opened her first solo exhibit, “Mise en Abyme,” in Light and Space Gallery at The Fort. She says she has also become an art therapist.

After  graduation, Wee took a vacation and enrolled in a class where she relearned ceramic art. In “Point B” are hand-built stoneware. She is now a studio assistant at the College of Fine Arts.

Her creations focus on the theme of family. Common scenes at home are present, such as a woman cooking in “Palagi na Lang Piyesta” and a man sitting on a toilet bowl in “Quiet Time.”

But the cute and tiny appearance of her ceramics is just a façade of the artist’s critique of issues of hierarchy at home. Wee says that since she now spends most of her time at home, she sees a controlled environment that has become the subject of her works.

Rodriguez says young artists like him are obviously undergoing a transition.

“At the end of the day, you still go back to your family. We are still in our transition phase [because we just graduated] but your friends and family will still be there in the end.”