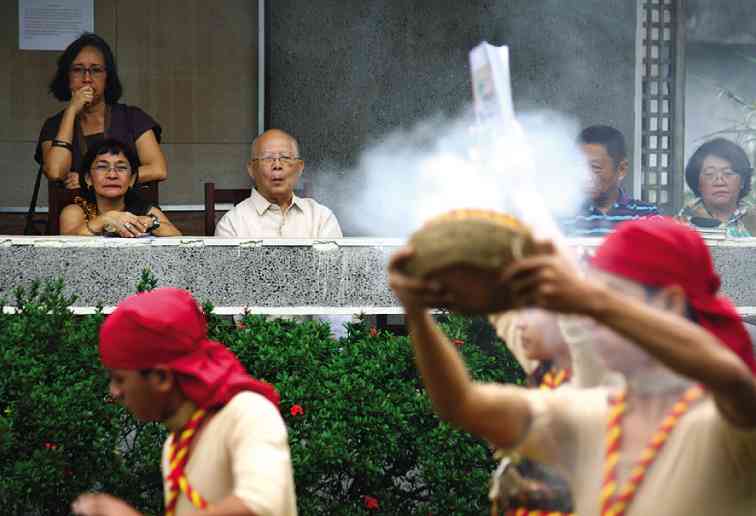 Super Typhoon “Yolanda” may have put the Dayaw festival in Tacloban in the backseat (it was supposed to be held last November).

But the festival did push through this month, if only to allow people to come together to celebrate the diverse cultural heritage of the Visayas.

An offshoot of Dayaw, the annual festival of indigenous Filipino cultures organized by the National Commission for Culture and the Arts (NCCA), Dayaw-Taboan incorporated a literary festival that brought together national and regional writers in Taclabon. The festival was held in UP Tacloban College Feb. 7-8.

With the theme, “Paglaum ha panahon han kataragman” (Hope at a time of crisis), Dayaw-Taboan is spearheaded by the NCCA’s Subcommission on Cultural Communities and Traditional Arts (SCCTA), headed by Commissioner Joycie Dorado-Alegre.

“This is a very significant time for us because this is an affirmation of our strength as a people,” said Alegre, who grew up in Tacloban, during her welcome remarks.

Dayaw means “praise,” and  the festival comes from the culture that celebrates its life from the bounty of its resources.

The two-day festival opened with a Hadang Ritual by the Northwest Samar State University Lamiraw and the Dagway Performers. The Hadang Ritual, a ritualistic dance to honor the gods for good harvest, was performed to give thanks for the lives saved after Yolanda.

In his lecture, National Artist for Literature Bienvenido Lumbera drew the two faces of writing poetry: that of the poet whose poem is the product of his reflection on a specific topic or experience, and that of the world in which the poet tries to situate the issue or the experience.

Lumbera read Emily Dickinson’s poem “Hope Is the Thing with Feathers,” which he translated into Filipino: “Pag-asa ang Bagay na may Plumahe.”

Days after Tacloban was hit by the storm surge, Lumbera wrote a poem, “Sa Muling Pagsibol,” which was anthologized in a book whose proceeds will go to the victims of Yolanda.

(Quick, prepare the fishing boat/ plough  the land/ persevere, make another start/ rebuild the wrecked landscape/ bring forth a new season of grace.)

Lumbera, despite having the clarity of tone and depth of insight in his poem, admitted that he did not have a first-hand experience of the storm.

The Lamiraw Creative Writing Workshop, established in 2004, honored three writers for sharing their expertise and years of care-giving to the growth and development of Waray writings and the other writings in Cebuano and Inabaknon in Eastern Visayas.

The recipients were: Merlie Alunan, professor emeritus for creative writing of the UP System; Victor Sugbo, chair of the Humanities Division; and David Genotiva, full professor of Eastern Visayas State University.

The award was given by Katig Writers Network, Inc., the regional umbrella organization of writers across Leyte, Samar, Biliran and Capul.

In the afternoon, local writers and theater actors gave poetry performances which they spoke in their native tongue.

It is said that it takes  seven years for the mangrove trees to reach full maturity. By then, the trees will be able hold the land together amid storms.