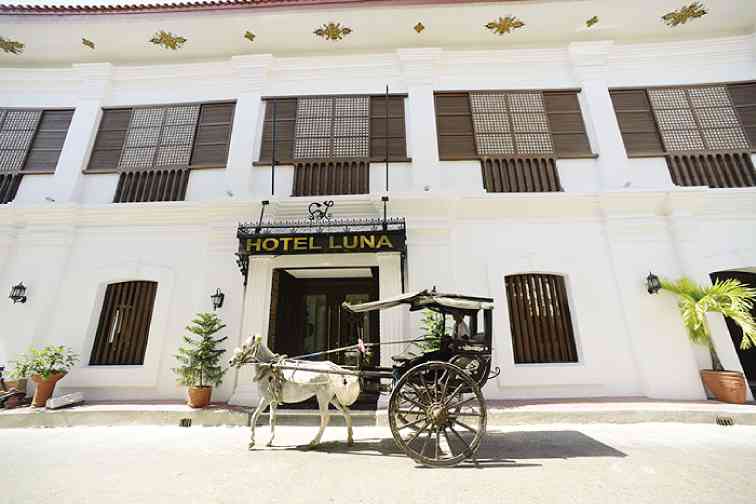 THE NEW high-end address in the Mestizo District

Vigan, the only World Heritage City in the country (as declared by Unesco in 1999), has a new high-end address right in its heritage district: Hotel Luna at Gen. Antonio Luna St. cor Ventura de los Reyes St. It had a grand opening on Feb. 8.

This is a four-story boutique hotel with four-star accommodations: 44 guestrooms, five loft suites, five executive suites, plus touring services for Vigan’s heritage sites. Its main building is a heritage structure itself, the Benigno Que House, built in 1882 by Don José Florentino as a wedding gift for his daughter Carmen.

“We’re trying to raise the standards for hotels in the city,” says Kristine Singson Meehan, vice president for operations of the family’s group of boutique hotels. “Since we already have Rembrandt in Quezon City and Le Monet in Baguio, we decided to name this one after another painter.”

She says the choice of name is quite apt because Juan Luna was an Ilocano from Badoc town, and the hotel also stands on Luna Street.

A Hotel and Restaurant Management graduate from La Rosey in Switzerland, Meehan is the middle child of Ilocos Sur Rep. Eric Singson’s six children. She’s Manila-based but she says she has to be in Vigan at least once a week.

“I have to do the purchases for the first few weeks,” she says. “Everything needs my approval. I have to see to the delivery of things needed, even what’s to be part of the minibar. I chose the pillows. I have the key people to do the daily operations, so later these things should be automatic. They have to do what’s needed without me going into details.”

In transforming the heritage structure, architect Mario Benzon says they had to constantly consult with the Vigan Conservation Council—from the design to the types of materials to be used. He worked in close tandem with engineer Edward Yu, the overall chief of construction.

After tearing down one solid wall to make way for an archway, they had to build the arch with the bricks from the original wall. An annex, where majority of the guestrooms are, had to be constructed in the style of the period.

The entranceway is flanked by two bulols, a male and a female with child, from the BenCab Museum in Baguio. The passageway to the lobby is flanked by two bronze female figures by Napoleon Abueva, one with salacot and windswept skirt, the other a nude in contrapposto; BenCab’s latest “Sabel” and Araceli Dans’ “Shawl of the Innocents.”

The ceiling here is adorned with a sculptural piece by Mulawin Abueva depicting a sun of bronze with 21 rays of carved wood (in five species of indigenous Philippine hardwoods), based on a design by his father Napoleon.

The lobby is surrounded by a pregnant nude in alabaster by Fred Baldemor; a streamlined “Maria Clara” in bronze by Abdulmari Imao; stainless-steel human figures poised for flight by Daniel de la Cruz; a small bronze bas-relief of the Deposition from the Cross by Napoleon Abueva; “Lavandera” by Fernando Amorsolo; works in paper by Romulo Olazo and Manuel Baldemor.

The centerpiece here is a low chandelier, an assemblage of readymades in cast iron, copper and crystal created by Yu.

By the time you’ve reached the reception area, while standing on the veined green marble and touching the carved wooden pillars by the counter, you would have guessed what this hotel is all about: This is the only museum-hotel in the country. While hotels usually boast specialty cuisine, recreation facilities or the spa, this one is unique in that it is selling itself by pushing Philippine art and cultural heritage.

Chula Bar is, of course, named after Luna’s series of paintings of the working-class women of Madrid. It’s a quaint, goldenly lit lounge with numerous stone figurines and several lightboxes showcasing Luna paintings.

Comedor Restaurant is adorned by works of contemporary masters, among them Ramon Orlina, Emmanuel Garibay, Elmer Borlongan, Andres Barrioquinto—plus 11 classic chandeliers of Swarovski crystal. Both bar and restaurant were designed by the congressman himself.

“I do the wine selection,” says Meehan.

She admits select spices and the steak selection have to be sourced from Manila, but the vegetables and meats they use are mostly local produce.

She says the house specialty later will be paella. The chef has concocted an Ilocano paella that may incorporate the ingredients of pinakbet and diningdeng, and Vigan longaniza, of course.

The signature bread will be sourced from Pasuquin, Ilocos Norte, a local bread that comes either soft or toasted, mildly flavored with anise, similar to the Italian biscotti.

The grand sala on the second floor has become the hotel’s main art gallery, housing the extensive art collection of Singson, which he says he started accumulating 15 years ago.

With fake art becoming an issue recently, Singson tries to meet the artists (if still alive) before buying the artworks, to make sure he gets the real goods.

His taste for art he traces to his mother Minervina Dario, a classical singer who had to choose home and family life over career in her prime. Her MDS Foundation takes custodianship of the impressive art collection, and supports seven music scholars at St. Paul’s College in Manila.

The veranda has been converted into a performance stage overlooking an open courtyard and a swimming pool. It is backdropped by Rene Robles’ high relief of the city’s scenic spots and historical landmarks, in hammered brass, copper and silver.

Here, too, is installed on a pedestal a large bronze bust of Luna, a collaborative work by Imao and son Juan Sajid. The open space is surrounded by opera balconies and can be seen from the glass elevator as you go up to your room.

The azotea is the roofdeck of the annex, perfect viewdeck of the heritage neighborhood of the Mestizo District. The wide and long lounge with chill-out music is open for booking for special occasions.

Benzon says they had to backtrack a few times while building the structure as they had to conform to the VCC guideline that no new construction should be higher than the 14.5-meter bell tower of St. Paul Metropolitan Cathedral.

Meehan says that later they will be charging an entrance fee or donation for a tour of the museum.

At breakfast in Comedor the morning after the hotel’s formal opening, a couple from Portland, Oregon (she a Pampangueña, he an Irish-American), is heard conversing with a mayor of a neighboring town, talking about the hotel’s amenities, from the art gallery to the state-of-the-art bidet. Apparently they’re with an NGO visiting the country, staying at Manila Hotel, and have gone up north on a medical mission.

“I’ve been around, I’ve stayed in several hotels,” she is saying, “so I can say that soon this is going to be the hotel of the North.”

Meehan says peak season for guest booking starts October, then January and February, based on the fiestas of Vigan, when domestic and foreign tourists come. For slack days, that is, the rainy season, they have strategized with booking for government people, for seminars and conferences. Her youngest brother Ari is helping her in marketing operations.

“Leisure and business hotels have inverse slack days,” observes Meehan, who’s been in the hotel business for 18 years.

Hotel Luna is a leisure hotel. The family has two more boutique hotels under development in Palawan and Boracay.

On a cove in Santiago town, the family runs a beach resort with 20 rooms. Meehan says they’re planning to connect it to the hotel. That is, hotel guests who may want to go surfing may avail of a shuttle service that will take them to their heart’s desire.