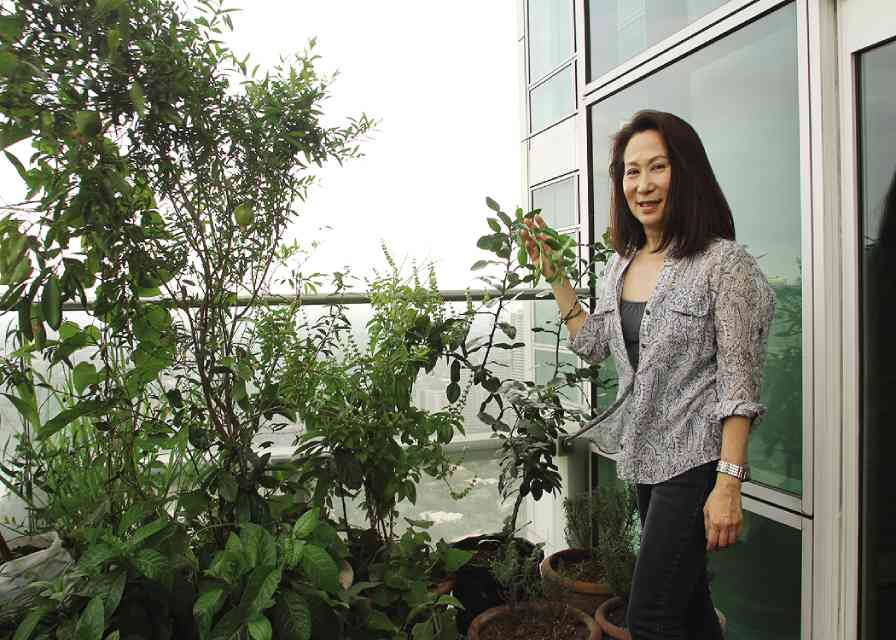 ELIZABETH Sy creates an oasis in Makati with her urban vegetable garden at her high-rise apartment. NELSON MATAWARAN

Green living, according to Elizabeth Sy

The balcony on a top floor of a high-rise opens to the sky, welcoming the cool winds and sunlight, often obscured by the clouds.

“I looked at my phone (weather app) today. It read that Makati was going to be hazy while Manila would be sunny,” remarks Elizabeth Sy, president of SM Hotel and Conventions Corporation, who is also an environmentalist and an advocate of holistic health.

Nonetheless, a veritable vegetable and herb garden thrives in the heart of Makati, where Sy gets her salads and teas. Making the most of the good light and the cool winds, the balcony is decked with ledges and weatherworn benches for pots filled with spring onions, kangkong, thyme, alugbati, lemongrass, dill, sage, pandan, red guava, lemon-basil, marjoram, black pepper, red ginger and goji berries.

Sy credits her household helper, Queenie Lavilla, for transforming the outdoor space into an edible greenery which grows much of the hotelier’s food. It has produced purple yam, corn and lime, and even flowering plants such as Indian beads.  The plants are layered on top of one another and bloom at various times of the year. The pots are filled  with quality organic soil and augmented with organic compost. Food scraps from the kitchen are turned into plant food.

“We use an herbal compost activator and we spray with enzymes,” says Sy.

Lavilla then points to sambong (Blumea balsamifera), an herb used for fever and coughs.

Sy maintains she doesn’t get coughs or even morning sniffles, common to most people living in polluted cities. When her friends in and past  midlife complain about the aches that come with age, Sy is amused. “What are they talking about? They are surprised that I hardly even get coughs and colds.”

She admits that, after a certain age, she has become more careful about her diet and lifestyle.

Sy recalls that when she was 20, she met master yogi and poet Rolando Carbonell, who posed this challenge: “Do you want your stomach to be a cemetery of carcasses or a garden of vegetables?”

“His statement struck me and has stayed with me since,” says Sy. She read groundbreaking books that prompted the holistic health movement. Frances Moore Lappé’s  “Diet for a Small Planet” revealed how meat production wreaked havoc on the environment and called for vegetarianism. Likewise, Rachel Carson’s “Silent Spring” exposed the deadly effects of pesticides.   Sy follows the food combining principles in  Harvey and Marilyn Diamond’s “Fit for Life,” such as avoiding fruits after lunch to prevent a gassy stomach.

“I eat more veggies than meat. I love mung beans with alugbati (spinach vine). The leaves of our alugbati are very tender. My friends sometimes laugh at what I eat. I like jackfruit seeds, corn and other natural things,” says Sy.  “I’ve always been into this kind of lifestyle. My kids would roll their eyes and say, ‘It’s too green!’”

Raising  a family in Bavaria, Germany, for 14 years, she became exposed to a holistic milieu.   The state is a wellness destination, with its long tradition of alternative healing systems and health resorts. It is also very active in educating the locals in environment protection to ensure a better quality of life.

Its culture has taught Sy  how conspicuous consumption could be very wasteful. “It’s not always about acquiring the latest gadget. Why not keep the same one until it is no longer useful?”

Her eco-friendly lifestyle has found its way into SM’s corporate social responsibility. As a director of the World Wildlife Fund, she helped forge a partnership with the WWF and Hamilo Coast,  SM Investment Corporation’s resort and leisure destination in Batangas.

She points out that WWF created measures to regenerate the marine life that was once endangered by illegal fishing. The mangroves have been preserved so that giant clams could be cultivated and other marine life would visit the waters.

She recalls a supermarket trip with her sons while living in Guam. The boys couldn’t  help but notice that the carts of the other shoppers were loaded with meat while Sy’s cart was filled with vegetables. “Mom, we’re the greenest cart here,” they said sheepishly.

“The supermarket was selling big slabs of frozen meat. They didn’t look fresh,” Sy recalls. “I’ve been watching what I eat.”

On social occasions, she politely partakes of what is offered to her in moderate portions.

Breakfast is oat milk or cashew milk mixed with energy-boosting hemp hearts,  flaxseed, brewer’s yeast and maca root powder.  She eschews dairy milk because it is believed to produce mucus. Lunch is a salad, and dinner is soup with herbal teas. Her drinking water is purified by Bio Disc, a machine that treats its energy and mineral content. The revitalized water improves the transfer of nutrients in the body.

During her free time, Sy reads up on holistic health trends. One of her discoveries is a a health elixir,  kombucha,  a fermented mixture of sweetened tea and a mother culture called scoby (symbiotic colony of bacteria and yeast). Sy says it tastes like cider vinegar, with a slight kick from the alcohol content.

Buying the mother culture in Canada, she has been brewing her own beverage. The mother culture, which looks like a gelatinous mushroom, is mixed with black tea, made from filtered water. It is stored in a 500-ml jar and covered with a kitchen towel.  The fermentation and cultivation of the culture takes more than a week.  The mother colony continually reproduces   so Sy has a regular supply for her brew.

Kombucha is believed to detox the body, improve the digestive system, promote the enzymes, and boost the immune system, and has anti-aging effects.

The effects of grain and nut milks and kombucha tea were shown in her medical exam. “My cholesterol level went down,” she says.

The minimalism of her residence reflects her simplicity. Done in a soothing neutral color scheme, the house is furnished only with essential furniture and hardly any adornment, making it very spacious and light-filled. “That’s to let in the good chi,” she says. For every new acquisition, something has to be discarded to maintain the room’s breathing space.

Sy’s personal commitment to health and its connection with the environment have become an advocacy. “Take care of your body so that it will take care of you,” she says.