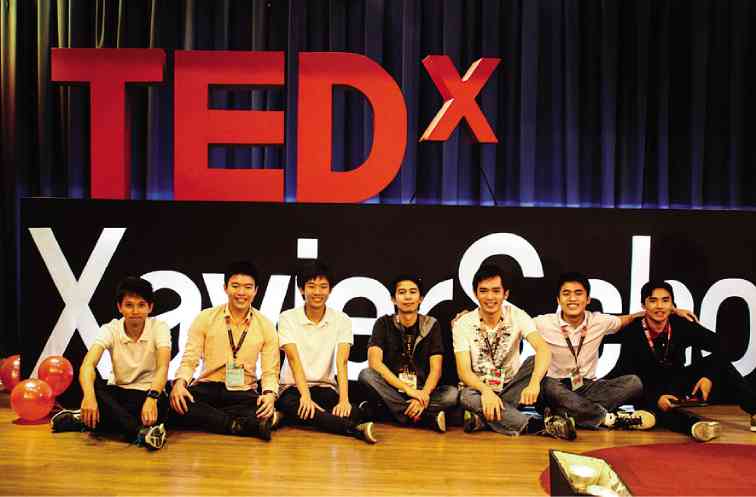 THE XAVIER debate team with their moderator Kip Oebanda

Happiness is a choice

Initially established as a conference that brought together people from the fields of technology, engineering and design (TED) in 1984, TED has since evolved into a global set of conferences devoted to “ideas worth spreading,” and tackling subjects beyond merely those that represent its acronym.  It also grants organizations the license to host independent TED-like events called TEDx.

On Feb. 8, hundreds of people from different schools gathered for TEDxXS at Xavier School, the only high school in the Philippines that holds annual TEDx events, to listen to six individuals and their stories of “inspiring happiness.”

As the only Xavier student to speak in this year’s conference, Mark Tan talked about his Chinese-Filipino background, and how he was initially confused by his Chinese and Filipino identity.

Yet when he finally got to visit his great-grandfather’s tomb, he quickly realized that our stories don’t begin the day we are born. Our stories actually begin in the “middle of things,” and in Mark’s case, it could be found on the tombstone of a temple  in Xiamen, China.

These stories of ours can also remind us of our limitations and weaknesses.  As a victim of bullying when he was younger, Mike Cuepo, a Filipino teacher in Xavier, needed to learn how to change the way he looked at things, and accept himself even if his friends thought that he looked like a daga, and his surname sounded like “Quiapo.”

But it’s only when we accept our situation that we are able to fully love ourselves. For Michelle Dayrit Soliven, a two-time cancer survivor, it was constantly saying “yes” to God’s plan for her that allowed her to not only love herself, but to also love the people around her.

Even when she was about to undergo a double mastectomy, she tried her best to remain calm. And it was this same positivity that manifested itself as she threw wig costume parties in the cancer center on her way to becoming its “happiest” patient.

Michelle’s enthusiasm served as the perfect transition to the intermission number by the Silly People’s Improv Theater (SPIT) as they performed gibberish “improv” scenes, and used their psychic improv powers to answer the questions of students ranging from “When will I find true love?” to “How can I get fat?” It was all laughs, as they even came up with an improv song using words beginning with all 26 letters of the alphabet!

With students from different schools comprising most of the audience, the next speaker, Rosanna Lopez, founder of Sparklelab, fittingly talked about the importance of informal learning spaces, and how to make kids fall in love with learning.

In a society focused on grades and results, Rosanna encourages kids to focus on the learning process instead.  Showing pictures of Harry Potter dolls, Spybots, Superhero board games and myriad other innovative creations, Rosanna’s message was clear—learning can be your fairytale story.

The fun had just begun as the next speaker, Paolo Trinidad, a laughter yoga specialist, worked his magic and made the audience erupt in endless laughter.

Paolo has used laughter yoga to not only help heal survivors of the Zamboanga siege and the more recent Typhoon “Haiyan,” but also to help people lose some weight, as he explained that 20 seconds of fake laughter can actually be equivalent to three to five minutes of working out!

The laughter quickly turned into heartfelt tears and inspired passion as Xavier’s not-so-ordinary debate coach Kip Oebanda took the stage as the final speaker. Born in a prison as “daKip” after his then pregnant rebel mother was “caught” but spared by one of the army soldiers, Kip was forced to learn how to be grateful no matter how harsh life can be.

More importantly, he has found happiness and fulfillment in running his own NGO, the Visayan Forum, which combats child labor and human trafficking!

Although Kip’s story sounded like that of a real-life super hero, he admitted that there are realities in life that we cannot change. Yet, we can still find happiness in changing what we can.

Seeing happiness from several different lenses through the stories of these inspiring speakers in TEDxXS, I realize that happiness ultimately boils down to making a choice, and this choice alone is something we should be grateful for.