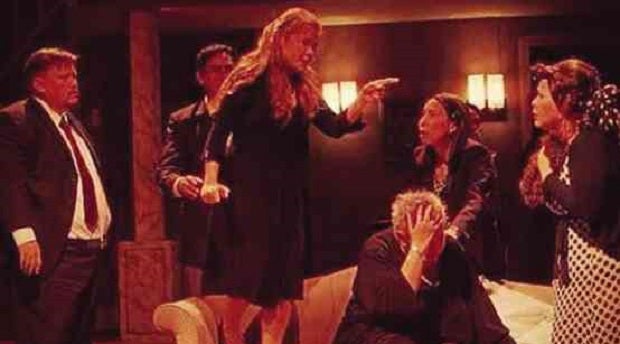 “August: Osage County,” the Pulitzer Prize and Tony Award-winning play by actor-writer Tracy Letts, is set in Pawhuska, Oklahoma, a speck of a town of less than 4,000 people somewhere in the Great American Plains. The state is just north of Texas, so it’s perfectly acceptable to assume that they must speak in a sort of Southern accent there.

But in the context of Repertory Philippines’ running production of “August,” geography and speech patterns become irrelevant. Without its seemingly distant, all-American facade, Lett’s three-act, three-hour tragicomedy about the dysfunctional Weston family remains an instantly familiar brand of entertainment hereabouts.

That is, “August,” packed with planetary portions of juicy dialogue and a dash of physical aggression, is in its indisputable way the mother of all soap operas—and it couldn’t have landed on a more fitting shore, in a country that feeds nightly on unending servings of teleserye or TV soap opera.

The world of “August” is confined to the crumbling Weston residence. Director Miguel Faustmann, who’s more widely recognized as an actor, has created a three-tiered set that’s as cluttered as it is detailed, aptly mirroring the laborious existences that walk its creaky floors.

Faustmann just about scaled down the original Broadway design, but combined with Katsch Catoy’s lights, this more intimate setup also imbues the house with a darker, more menacing air.

“But … a house is not a home when there’s no one there,” goes the ’60s ditty made popular by Dionne Warwick. “August,” meanwhile, makes a case for a house that’s even less of a home—and more a hellhole—when stuffed to the brim with people.

That’s the only time we see Beverly; by Act I, he’s been missing for five days. In playwriting parlance, that means a grand homecoming, where the rest of the extended clan descend on the homestead to rekindle old ties, bicker with each other, share old stories, and bicker some more.

It’s a time-tested formula that’s at work here, in which all the characters are cooped up under one roof and left to their own devices for a theatrical fight to the finish. The fighting becomes especially bloodier because of Letts’ ruthlessly eloquent dialogue (someone screams, “Eat the fish, bitch!”) and his seven cogently written female characters.

At the core of this gladiatorial household is Beverly’s wife Violet, a drug addict whose mouth is a volcano of cuss words, insults and oral cancer. Here, she is played by the legendary Baby Barredo, and one would be hard put to conceivably find another actress to take her place.

There is no other way to clearly illustrate Barredo’s turn as Violet except to say that she literally sets the stage ablaze whenever she speaks. It’s a magnificent performance by any standard, where the insults erupting from her mouth literally sear the ears, where her piercing, eagle-eyed stare (“Nobody slips anything by me,” she intones) can make even the viewer at the backmost row shrink back in fear.

It’s a rare and extraordinary thrill, really, to witness Barredo revel in the character’s malevolence and sink her teeth into her meatiest role of late with undaunted voracity.

But Barredo finds her match in Pinky Amador, who plays the eldest Weston daughter Barbara. Barbara is a weary fighter, burdened by marital woes, menopause, and an inherent need to “run things,” to quote her iconic declaration in Act II’s sensational fight scene.

Amador, who was last seen onstage as the title character in Atlantis Production’s “Piaf” a year ago, brings very much the same brutalizing ferocity to her Barbara. It is a completely unhinged portrayal, derived perhaps from the actress’ awareness that tuning up the volume and sharpening her own set of knives are the only ways that Barbara can go head-to-head with her monstrous mother.

And this is the thumping heart of “August,” really—the struggle of two women over power and control over the household, and the gradual blurring of the lines, where mother and daughter eventually become indistinguishable from each other.

In this sense, the casting, or rather, pairing of Barredo and Amador is a masterstroke, so much so that this “August” can reconsider changing its marquee to bear “The Baby and Pinky Show.”

The rest of the veteran cast impeccably embody their roles. In particular, Liesl Batucan affectingly captures the muddled, narcissistic soul of Karen (the youngest daughter, whose idea for a funeral dress comes with a thigh-high slit).

Sheila Francisco is a whirlwind of brazen nastiness and nuttiness as Violet’s sister Mattie Fae, and Bayani, in her few lines, is a surprisingly fierce presence as Johnna.

(In fact, only Thea Gloria, as Barbara’s daughter Jean, betrays any hint of difficulty grasping the character, but hindsight seems to justify her coarse, plodding manner of speaking as a fairly accurate depiction of the pothead adolescent.)

Given that there’s not an “un-juicy” role in this play, there is always the danger of any production of “August”—more so this Repertory version that features some of the country’s finest stage performers—becoming a deafening Grand Guignol, whose terrors take the form of frayed relationships, pulped egos and violently uncapped wigs (the last one happens to Violet herself).

Enter Chris Millado, artistic director of the Cultural Center of the Philippines, who directs this “August”—the first time he’s ever helmed a Rep production. In the programme notes, he highlights ensemble work as the most essential factor in staging the play.

And that’s exactly what transpires on that stage. As a director who’s quite experienced in dealing with the spectacular (2012’s “Stageshow” comes to mind), Millado’s mantra appears to be “restraint,” and it shows in the way his actors handle the endless, exhilarating wordplay that is this play’s most satiating pleasure.

The result is a tightly directed show that leaves no room for unnecessary showboating but with nary a dull scene. Thus, the great irony of “August” is cleanly fleshed out: That the laughs become bigger and more frequent just as the characters sink deeper and deeper in the muck of their lives.