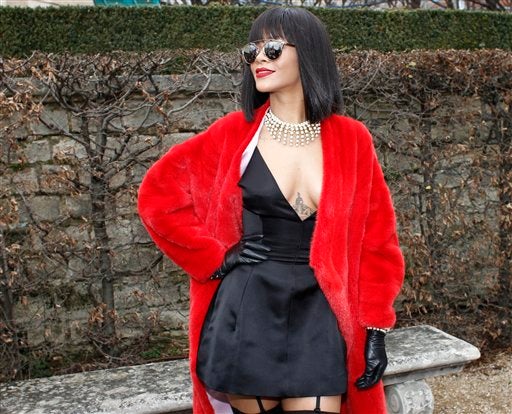 PARIS — After turning up at Balmain’s show after everyone had left, Barbadian superstar Rihanna arrived this time at Friday’s Christian Dior show before hardly anyone had arrived.

Though the 26-year-old clearly doesn’t lack staff — with aggressive bodyguards around her — if “fashionably early” doesn’t catch on, perhaps she could do with a better time-keeper.

Photographers swarmed around the “Diamonds” singer inside Paris’ Musee Rodin in front of row upon row of empty Dior seating.

“I just love fashion,” she told The Associated Press as she posed in shades and a bright fur Dior wrap jacket that revealed ample bosom to flashes of camera.

If the singer, who hopes to launch a designing career and is touring Paris Fashion Week, was aiming to create the new concept of “fashionably early,” good luck to her. Celebrities are normally expected to enter at the very last minute for fashion shows, for maximum effect.

Firstly, the jacketed-businesswoman theme was a dramatic departure from his last — and very successful — ode to diaphanous couture.

The show, entitled “City Lights,” which began with long menswear cashmere coats, did feature some nice suits — although they weren’t particularly ground-breaking.

Simons’ androgynous thinking had a lot more success in a series of wool gowns in fuscia, bright yellow and blue that had double layers and V-shapes mirroring the two tiers of an office suit.

But even those could have done without distracting embroidering that seemed like an afterthought to please the Dior clientele.

Certainly the best part of the show was when he let the Dior girl do the talking: in a great set of asymmetrical and trapeze nylon dresses that blossomed in quilted pleats.

Dior girls don’t want to go to the office. They want to have fun!

In 1958, after Monsieur Dior died in unexpected circumstances, his protégé — a 21-year-old unknown called Yves Saint Laurent was chosen to fill his shoes and presented his first collection.

It was a historic show, launching Saint Laurent into the fashion stratosphere, but one that came before the time of most people who attend Dior shows these days.

Apart from one: veteran fashion critic Marylou Luther, who spoke to the AP.

“In 1958 I was working for the Chicago Tribune and I covered the first collection after the death of Dior,” said octogenarian Luther, with her signature round black spectacles.

“He went to the avenue Marceau headquarters, stood on the balcony and there were thousands — I’m not exaggerating — thousands of people. The word had gone out. This was maybe an hour after the show. And a throng of people waiting for him to come out and wave,” she added.

Luther says that although 55 years have passed, the current Dior collections still have traces of the heritage: “You still see signs of the Bar Jacket, and the New Look.”

Issey Miyake used circular pleating — inspired by tree rings — to produce one of the most beautiful and unpretentious shows so far in Paris Fashion Week.

And that was aside from the show’s great theatricality: opening with an electronic rock band and models who trod the catwalk in plain black outfits armed with tree-width circular panels.

Spontaneously, guests applauded when the panels opened up magically into pop-up dresses — that were then donned by these tree nymphs.

The collection itself saw curved, abstract and trapeze silhouettes float by with a gentle bounce in incredible shades of indigo, bronze, soft green, cerulean blue and warm deep pink.

The elastic mastery was owed to the Franco-Japanese house’s new technique of hand pleating on the curve.

Then poncho and shawl type garments almost eluded definition, at times moving with the suspended gravity of a sea medusa.

Hollywood’s Harvey Weinstein, who attended the Dior show, has said that the problems associated with the troubled movie “Grace of Monaco,” featuring Nicole Kidman as the actress-turned-princess, have “obviously” been resolved.

The influential producer came to Paris to attend Friday’s Cesar awards, the French equivalent to the Oscars — for the nomination of the Quentin Tarantino movie “Django Unchained,” produced by him.

But it’s not been such smooth riding for the heavyweight executive in recent months.

“There are two versions of the film — mine and his — which I find catastrophic,” he said to the newspaper.

Weinstein pointed to smoother waters now after months of silence, telling the AP on Friday: “Obviously (the problems are resolved). We’re opening (May’s) Cannes Film Festival.” He did not elaborate.

Roland Mouret attempted to produce a catwalk show without the usual PR gimmicks, calling his chosen styles simply the “definition of myself.”

The 52-year-old French designer, who found fame for his cap-sleeved va-va-voom Galaxy dress, thus went back to his student years — the late 1970s and early 80s for a graphic collection with lashings of black.

Large triangular leather collars were the leifmotif, mirrored by the angles in black and white geometric shapes, interspersed with a few looks in blown up plaid check.

It was red or blue against black — the colors of punk. And one large black and white speckled jacket possessed a flat, wide silhouette that was all the rage at this time.

Sadly, the designer went a little overboard with a series of warped tassled skirts.

No definition of Mouret is complete without a reference to the sexy derrieres that made his name. Several body-hugging va-va-voom sheaths, zipped down the back, had fashion insiders turning their heads to glimpse them from behind.