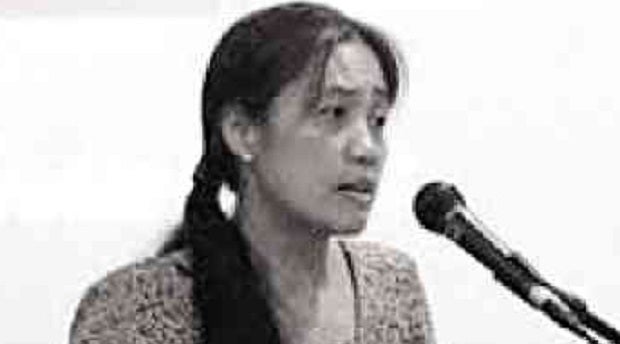 Tragedy lies deep in the river of the war-ravaged provincial town of Iraya. While the water smells of lemongrass, hidden beneath the surface are corpses: casualties of armed conflict between the Philippine government and insurgents during the years 1986-87.

Estrella, whose love is among those who disappeared during the war, bravely scours the river for bodies of the dead. Using her 12-meter-long hair, she retrieves these bodies to make sure they are not forgotten, and are given the justice they deserve.

Such is the harrowing yet magical tale that Australia-based, award-winning writer Merlina Bobis paints in her novel “Fish-Hair Woman,” which will be brought to life onstage by the DLSU Harlequin Theatre Guild (HTG) to conclude its 47th season.

While it is a work of fiction, many elements of the story are steeped in fact and history, as Bobis related during her recent Manila visit for the launch of the musical.

“The setting of ‘Fish-Hair Woman’ is based on my grandma’s village: Estancia, Malinao, Albay, which was badly affected by the war against insurgency,” said Bobis, who herself grew up and has family still in Bicol.

“The Fish-Hair Woman is my grandma, because as a young woman she had very long hair that reached to the back of her knees, and she would wash her hair in the river in the morning, and it would take the whole day to dry it,” she added.

The task of adapting the play fell upon actor, director and playwright Rody Vera; Dodjie Fernandez composed the music.

Vera’s initial reaction after reading the novel was, “Paano ko ito isasa-entablado?” (How do I write this for the stage?)

Vera went directly to Bobis for help and guidance. “I’m very lucky that the novelist was very gracious and kind enough to share her ideas,” said Vera. “She gave major suggestions, and everything fell into place.”

Bobis was equally thrilled that a local company has decided to turn her work into a full-blown musical. For her, writing “Fish-Hair Woman” was a sort of homecoming—she was living alone and trying to make a name for herself in Australia when she began the novel 17 years ago.

Bobis herself has performed the story of “Fish-Hair Woman” through a one-woman play titled “River, River,” which has toured in Australia, the United States, Canada, Spain and the Philippines.

To fully engage the audience in the story of Iraya and the Fish-Hair Woman, show director and HTG artistic director and trainer Raffy Tejada decided to stage the musical in a theater-in-the-round setup designed by Joseph Duran.

“The story showcases different points of view. With a theater-in-the-round, while one scene is being played out, the audience will still get to see other perspectives,” said Tejada. “We also want the audience to feel like they are also residents of Iraya, that they are part of the story.”