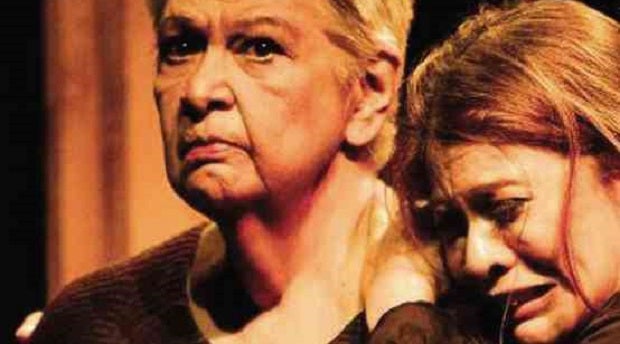 BABY Barredo (with Pinky Amador in a scene from “August: Osage County”): “We stuck to our guns ... [Rep is] now 46 years old; never did we import an actor to play a lead role. Today, there is so much theater—and practically all the founders are from Rep.”

Baby Barredo on Bibot Amador: ‘It was a platonic relationship’

By: Cora Llamas     Philippine Daily Inquirer / 02:36 AM March 15, 2014
The raves are still pouring in, even as Repertory Philippines’ “August: Osage County” is on its last weekend. The lion’s share of the praise goes to Baby Barredo, the company’s cofounder, artistic director and now the play’s main performer after an absence of more than a decade. Barredo remains at the top of her game at 72—an age she is not ashamed to admit.

“I don’t understand why women hide their age,” she says with a mixture of wryness and her trademark feistiness. “You are what makes your life. You earn these wrinkles.”

Barredo—“Tita Baby” to those who know her—has earned more than that. With Rep having given birth to dozens of stage performers, directors, designers, stage managers and other craftsmen for the past 40 years, calling her a stage mother may not be enough. The lady remains a guiding light and a walking history lesson on modern Philippine theater.

Her passion for excellence has not diminished, even after the decades. As she has always told her actors: “Be the best. Don’t settle for second best. If the passion is there, you cannot fail. Success does not just fall like manna from heaven.”

As for the inevitable passage of years, she shrugs it off. “Acting has no age limit. You can still go on stage and still perform.”

One of the reasons Hollywood’s brightest stars who had started in theater—Peter O’Toole or Anthony Hopkins, say—often returned to it in-between film assignments was because of the challenge, she says.

“Live performance is more demanding. You do not have the luxury [given to you by film]. You cannot tell the audience to rewind [if you make a mistake]; onstage, bahala ka sa buhay mo. [But] if you’re doing the [more complex, difficult roles] like Macbeth or Medea, and the audience feels empathy for your characters, then that is what you call hubris.”

Hubris is defined as “excessive pride” or “arrogance,” but Barredo is pertaining to that rare moment when the performer achieves such a oneness with the character while riding a seemingly limitless volcano of energy that it almost feels Olympian in nature. In his biographies, the late British actor Sir Laurence Olivier, once regarded as the greatest actor who ever lived, damned the times he would reach those scales—because they would inevitably be hard to top.

To Barredo, empathy can temper the ascension and make the art all too real and relevant to the audience: “When I was coming out in ‘Sound of Music’ and ‘Annie,’ the children would wait outside my dressing room and look for Maria and Ms Hannigan, and not Baby Barredo … It’s not the reviews or the applause that you get. It’s when these people go to you and they are looking for that character—they believed you.”

She is hard-pressed to name a favorite character in her 40 years of performing. “The role I am currently doing (Violet Weston in ‘August: Osage County’) is my favorite. If my heart and soul are not there, it will not work. I loved them all when I was doing them.”

It’s like asking who of her theatrical children—onstage and behind the scenes—she is most proud of. To Barredo, the current ensemble and alumni of Rep make up one big happy family that she and late cofounder Zenaida “Bibot” Amador raised and nurtured.

“The Repertory actors and actresses are my children,” she says. “I am proud of them. Tears fell from my eyes when I saw ‘Miss Saigon’ in London.”

That was in the late ’80s when Lea Salonga, Monique Wilson and a dozen Repertory-trained actors made history by being cast in the Cameron Mackintosh mega musical. The late director Marilou Diaz-Abaya, riding on the plane with her as she flew back home, had congratulated her, saying, “If these kids had not been performing in English-language plays, they would not have made it to London and pitted their talents against the Brits.”

Abaya also called that casting coup a “vindication” against the criticisms that Rep had received for years for producing English-language plays. Barredo and Amador had envisioned a theater company that focus on developing Filipino talent, first and foremost.

“We stuck to our guns,” says Barredo. “When actors want to know acting, they go to Rep. We are now 46 years old; never did we import an actor to play a lead role. Today, there is so much theater—and practically all the founders are from Rep.”

The claim can be substantiated by a good look at who’s leading Philippine theater today: Audie Gemora of Trumpets, Monique Wilson of New Voice Company, Bart Guingona of Actors Actors Inc. and Rem Zamora of Red Turnip Theater, just to name a few.

Barredo likewise stands by her and Amador’s choice of material, which she says was a matter of survival. During Rep’s birth pains, the paying audience would come only if the plays were in English and authored by well-known American and European playwrights.

Still, Barredo points out that “the first play we ever did was an adaptation of August Strindberg’s ‘Miss Julie’ in Tagalog.  Rolando Tinio did the translation, directed the production, and Ella Luansing played the title role.”

Barredo, Amador and Rep’s other forefathers, Leo Martinez, Tony Mercado and Subas Herrero, put in their own money and the actors gave up their talent fees to cut costs.

In a sense, almost 50 years later, Rep is coming full circle, with Chris Millado of the Cultural Center of the Philippines directing “August: Osage County.” Millado was not limited to casting performers solely from Rep.

“He has a discerning eye, he is very intelligent and his English is amazing,” says Barredo of her director. At the same time, she mentions collaborations with other non-Rep colleagues and coleaders through the years.

“We opened our doors,” Barredo says. “We coproduced once with Anton Juan. Behn Cervantes came out in a Rep play. Tony Mabesa acted with me and directed also in Rep.”

Then there was that pivotal moment in the ’70s when Barredo was asked to join the Philippine Educational Theater Association (Peta). Barredo was starting Rep with Amador and declined. Both theater companies would become the pioneers of contemporary Philippine theater, although their artistic directions could not have been more different. During the early years of martial law, Peta launched protest pieces in Filipino.

Peta’s founder was Cecile Guidote-Alvarez, an old friend and classmate from St. Paul College. Barredo recalls: “We studied together, we had this favorite eating place in [school] … The nuns would say [of us], ‘You want to look for one, you look for the other.’”

Though she turned down the Peta offer, Barredo did tell Guidote-Alvarez, “If you need me for anything, just call.”

Barredo’s life on stage began when, as a 5-year-old, she played the angel Gabriel in a school Christmas pageant.

“I felt at home in theater,” she says. “I enjoyed entertaining people, I never experienced stage fright.”

German nuns in St. Scholastica’s College where she spent her elementary and high school years formed in her the steely discipline that she would pass on to her own protégés. Daisy Hontiveros Avellana, the leading lady of film and stage in the post-World-War-II era, was one of her acting mentors.

Then, of course, there was Amador. Barredo admits she still sheds a tear or two every time she thinks of the lady whom she calls “brother, sister, director, boss, father, mother.”

The two hit it off when they met at a Christmas fund-raising project in their 20s and discovered similar interests. The intellectual and emotional connection was instant and grew over the years as they entered professional theater.

“She knew when my heart was broken,” says Barredo. “It was the same with me. I met my soulmate in Amador.”

Contrary to popular belief, the two were never sexual or romantic lovers. It is a topic she and Amador had laughed off and finally shrugged away: “A lot of people thought we were lesbians. Even our theater kids thought we were having a relationship.”

Now she sets the record straight, clearly and without ambiguity: “There was love, definitely. But it was platonic. It had nothing to do with sex. I had my boyfriends, even when I was with Bibot. When she was younger, she used to date guys. Maybe later, she had affairs with women. She never boasted of her affairs. She had her share of her friends, I had mine.”

She says the last word with finality, like closing a very private book that she rarely opens. The past is remembered with fondness, the present is celebrated and the future’s possibilities are left to ripen.

It might take another meaty role like the current one in “August: Osage County” to woo her again out of her acting retirement. But there are other avenues where she says she can perform: teaching drama in college or bringing good cheer to a hospital.

“God has been good to me,” says Barredo. “Rep has been successful. It’s time to give back.”