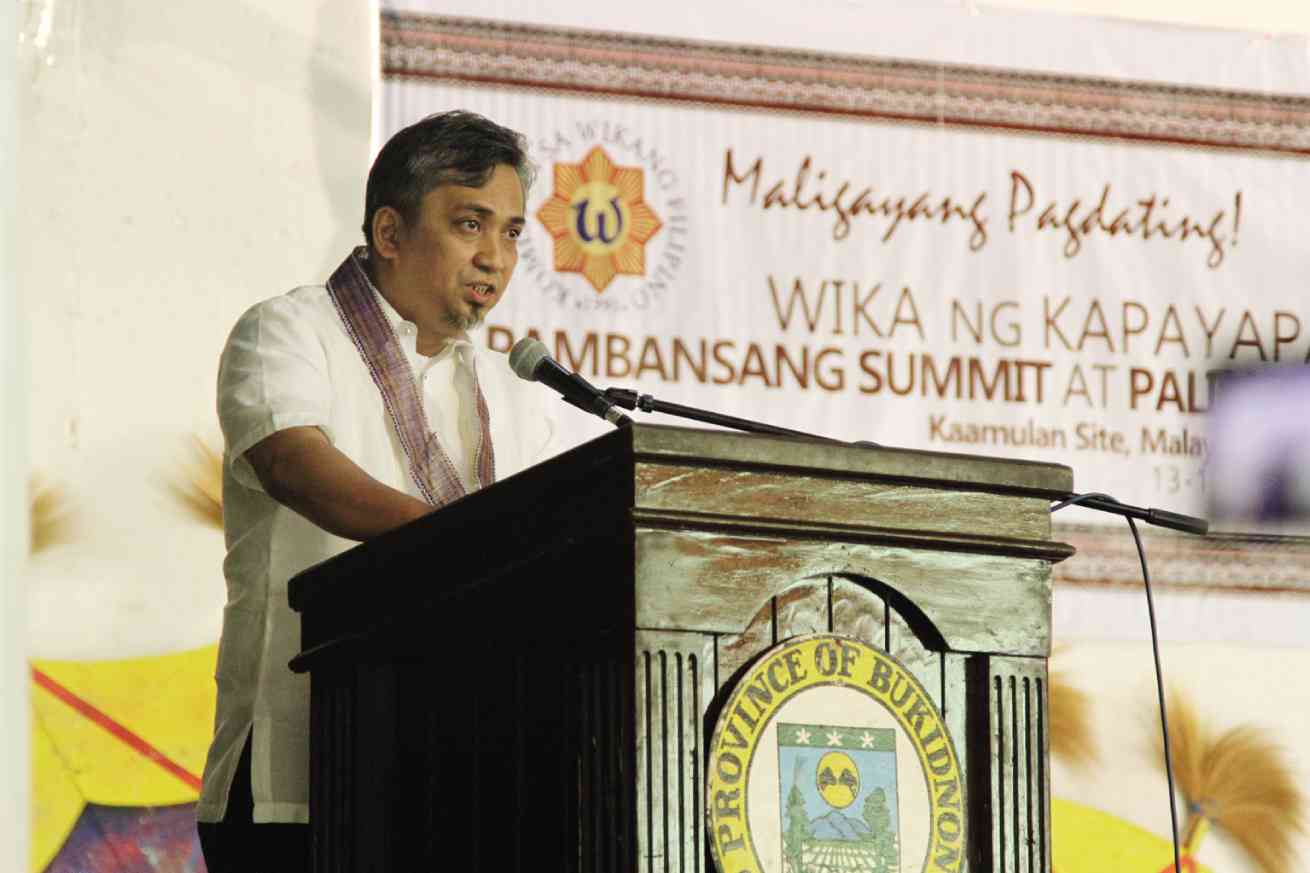 The Komisyon sa Wikang Filipino (KWF) and 100 representatives of cultural  communities nationwide have passed a resolution urging that every peace agreement and law be written in Filipino and the indigenous languages.

The resolution was passed during the extraordinary summit on peace and language, “Wika ng Kapayapaan: Pambansang Summit at Palihan,”  on Feb. 13-15 at Kaamulan Gym in Malaybalay, Bukidnon.

The resolution also urges government  to consult cultural communities using  language understood by everyone before embarking on development projects.

The resolution cites Executive Order No. 335 which intensifies the use of Filipino in government transactions, communications and correspondence.

Another resolution was made endorsing Sitio Tawagon, Baranggay Rogongon in Iligan city to become the “Kandungan ng mga Wika at Kultura.” The Higaonon community has allowed its 30-hectare ancestral land to be used for events promoting the interest of Filipino indigenous communities.

The KWF said that the resolutions would be given to President  Aquino, Senators Loren Legarda and Paolo Benigno “Bam” Aquino IV.  Aquino graced the last day of the summit while Legarda is the chair of the Senate Committee on Cultural Communities.

Almario said  KWF called for the national summit to draw out ideas from the indigenous communities on fostering peace initiatives through language as well as to help the commission in its language-mapping mission.

“Our long-range goal is to make an encyclopedia-style vocabulary,”  Almario said. “This will provide meaning for all the words related to peace in different languages that can be explained in terms of traditional thoughts and practices.”

“We also like to elicit ideas on peace and how it is understood in terms of their own languages,” he added.

KWF director general Roberto Anoñuevo  noted that the summit was the first serious gathering of indigenous Filipinos and government offices in talking about the different languages in the Philippines and how they could serve the cause of peace.

Jaime Castillo, a representative of the Ivatan community, said that the summit linked him to different communities from other parts of the Philippines, giving him a deeper understanding of their customs and concerns.

“It is good that we come here together because their languages are strange to us and we can’t understand them,” he said in Filipino. “The summit is a big help to have peace because we could talk with each other in one language.”

Aside from KWF, participating government agencies included the Department of Interior and Local Government, National Commission on Indigenous People (NCIP),  National Commission for Culture and the Arts, Mindano State University, and Office of the Presidential Adviser on the Peace Process.

Many of the participants admitted that they themselves weren’t good in speaking Filipino, but many tried to deliver their speeches and interact with one another using the national language.

“Based on the conference, many are hesitant to use it (Filipino), but after a while, they all spoke in Filipino,” Almario said. “I think that this conference is a good venue for them to have an opportunity to practice Filipino and for us to gauge the degree of efficiency in teaching Filipino among the indigenous people.”

NCIP chair Leonor Orlade-Quintayo said that KWF was pushing for Filipino as a lingua franca for peace talks.

She added that the indigenous people were very much adaptable and the elders were trying their best to deliver their thoughts in Filipino. She said that they were “adaptive, otherwise they will not survive the competition, because other rights of the indigenous peoples are at stake, so we need to learn that.”

Quintayo said  NCIP supported the KWF campaign promoting Filipino. “We support that but without compromising our own (respective indigenous) language.”

Because of the participation of many government agencies, the summit became an opportunity for cultural communities to air their grievances.

Dindo Dumagon, youth representative of the Mangyan community in Oriental Mindoro, said a power plant was set to be constructed at the foot of the mountain where Mangyan groups resided.

But the NCIP told the Mangyan group that the project had already been approved and that they should instead watch out for “any violation of the memorandum of agreement.”

Manobo-Talaandig leader Bae Alma Binayao said his community had had a long-standing fight against the Central Mindanao University (CMU) since it encroached on ancestral land.

She said since the Court of First Instance of Malaybalay awarded the 3,080 hectares to CMU in 1973, the university administration had been harassing the Manobo-Talaandig to force them to leave. But he said the indigenous group had insisted on its right of ancestral domain to the area.

“Our land area is becoming smaller,” Binayao said in Filipino. “Forest guards are keeping an eye on us. They are forcing us to leave but we are not leaving.”

Some of the concerns raised were not part of the KWF mandate, so Almario said there was a need to continue the summit if only to compel the relevant government agencies to act on the complaints and concerns of the cultural communities.

“We need to continue the summit,” Almario said. “I saw that the indigenous people are being taken for granted.”

Anoñuevo  said “peace issues” were at the heart of the concerns of indigenous people and they should be discussed in Filipino, not English.

Anoñuevo said the summit showed the need for government to interact with its constituency using “wika ng taumbayan,” that is, in the language of the people.