New ideas from an old standard

Antonio “Budji” Layug, creative director of the Center for International Trade Expositions and Missions’ Manila Fame furniture exhibition, emphasized that the fair, held last weekend at the SMX Convention Center, should be a place for designers and buyers to visit for novel ideas. The exhibitor’s strength is appraised according to the capability to generate fresh concepts.

Among the exhibits, the Red Box series featured upcoming designers who collaborated with manufacturers to produce innovative products.

Joseph Rastrullo created a table, dissected like a Lego block, which can be manipulated by the user to create a different look. Leeroy New produced pieces that bordered on art, such as a chandelier representing celestial bodies in orbit and dome-framed pendant lamps made of carton and abaca.

Kenneth Cobonpue’s circus-themed collection showed off his signature bright colors and unusual shapes, such as clown stools and wire mesh cannons. “Life is a stage. I wanted to show my quirky side. In a circus, there’s a freak show, acrobats and all kinds of acts. I wanted to recreate the anticipation of a show that’s about to start.

“The circus is an easy theme. You can design anything and make it any part of an act. I did the show not to sell but to enjoy myself and have fun,” he said.

Still, there were inquiries for Cobonpue’s glass-topped shark table, made of solid ash and steel. “When you look down on the glass, it’s as if you are looking at the surface of the water,” he said.

“This exhibit is all about freshness, novel and youthful designs that lift up the spirits. There’s whimsy but it’s still a good design,” said Layug.

Asked to comment on the concurrent Philippine Furniture International Show  show, which was just below, on the SMX Center ground floor, he replied, “The furniture industry wants to do its own show. It feels it can do it properly. It’s a matter of point of view. We should all unify for the sake of the country. We should approach design as one identity, the Philippine country branding identity. We are stronger if we work together.” 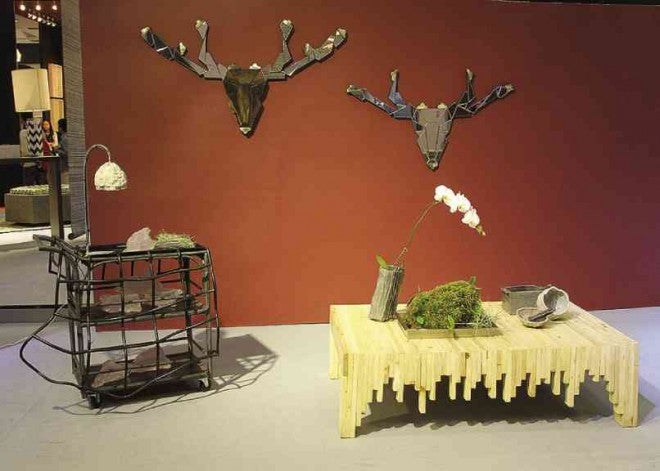 Patty Eustaquio designed clay lamps and vases for Asia Ceramics to show off the talents of its potters. These utilitarian objects look like sculptural pieces. The simplicity of the designs seems contemporary, but the craftsmanship is part of the country’s tradition of pottery.  Meanwhile, Rene Alcala of Peter and Paul Inc. reinvents his signature mosaic kamagong and mother-of-pearl mirrors into deer faces lined with shell.  Photos by Nelson Matawaran 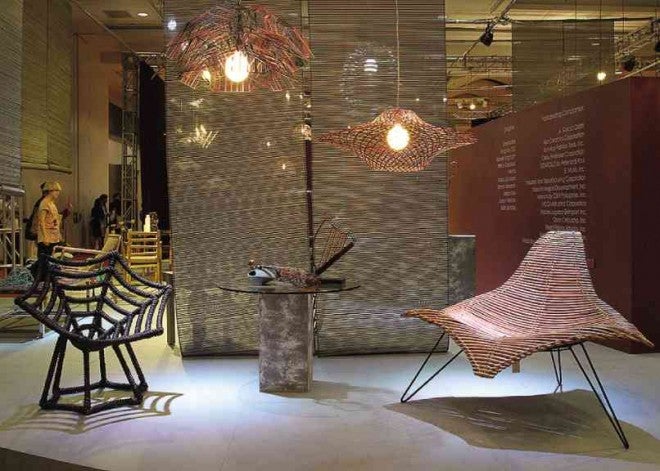 A consultant for Cancio furniture, Joseph Rastrullo  looks to nature for design inspiration. Ragno, the chair that resembles a spiderweb chair, is built with iron frames and wrapped with abaca rope.  The Manta, a ribbed recliner, takes its shape from the triangular fins of the manta ray. It is made with a rattan and black iron frame. Both comfortably nestle the lower back and  derriere of the sitter. The Ragno makes an interesting accent piece, while the Manta is perfect for the poolside. 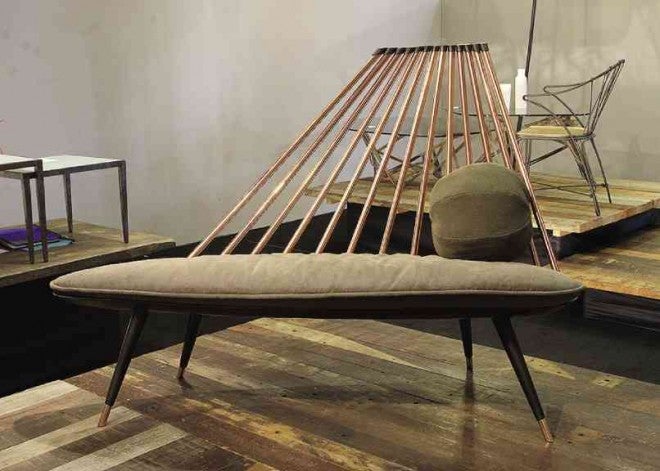 Jude Tiotuico looks to the engineering of suspension bridges for the chair designed for Industria. The metal back rest is a reference to the network of chains and cables that transfers compression to the supporting tower. 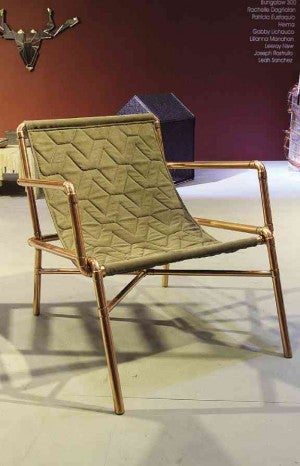 Normally used for plumbing installation, the copper pipe becomes an avant-garde material for furniture framework. It’s a break from  steel, aluminum, chrome and iron  commonly used to make skeletons of chairs. “Copper is warmer,” says  Lilianna Manahan. The 28-year-old designer not only capitalizes on its sheen, but also its malleability. The Art Deco chevron pattern on the quilted upholstery gives it character. 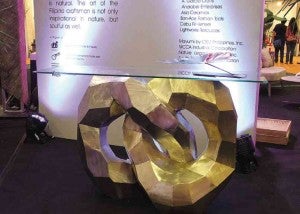 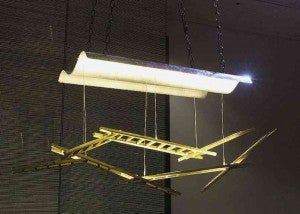 From  her childhood mementos, Lilianna Manahan digs out a box of ladders, and makes an illuminating fixture made of brass sheets and LED strip lights for Triboa Bay.  Ladders lying horizontally are suspended from the main light, thus making it a conversation piece. 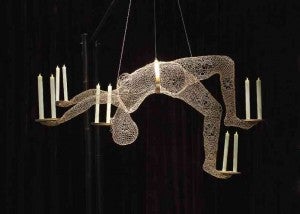 Bent over backwards and suspended at the waist, the copper-finished wire-mesh lady balances LED candles on her hands and feet; even her mouth is biting a plate of candles. Unsettling to look at but certainly witty, Kenneth Cobonpue’s artsy fixture reflects this season’s metallic trend. 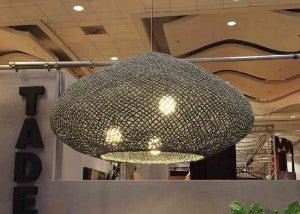 With a weekend home by the seaside in Davao, Maricris Floirendo-Brias, creative director of Tadeco, derives inspiration from her environment. This wire-mesh lighting fixture takes after the fisherman’s net. The abaca-entwined wires are woven on a big mold for shape. The lamp delivers both task lighting and drama. 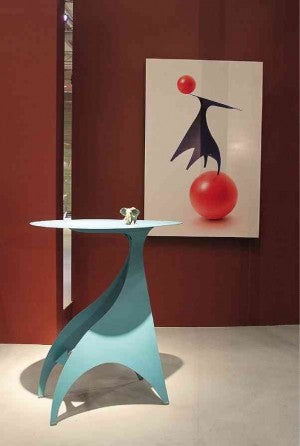 The long horns and the slim, curvaceous legs of the gazelle are abstracted and translated into a steel side table. The gazelle is one of the latest additions to Kenneth Cobonpue’s animal menagerie designs.

Inspired by Alfred Hitchcock’s menacing “The Birds,” visual artist Leeroy New’s standing floor lamp is both sculptural and functional. The LED downlighting not only highlights the shapes of the birds, but also exudes a soft mood for any room. 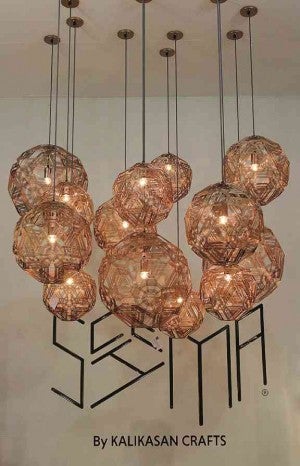 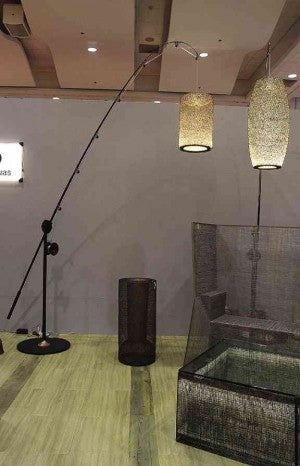 The arc lamp may seem cliché, but Miguel Aguas does his painted steel version by using an exaggerated fishing rod. The lampshade, made of wire mesh, is a reference to the fishnet. The wonder of the design is the unseen light bulb.