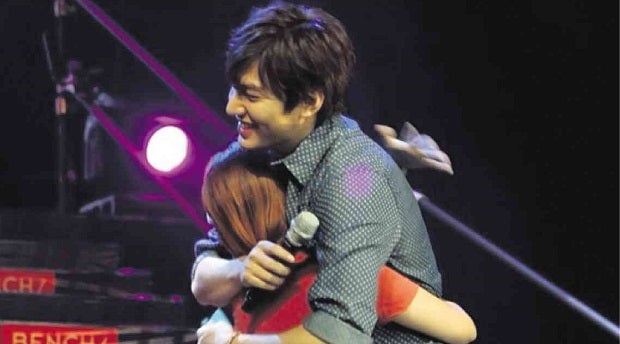 You wouldn’t think Korean star Lee Min Ho had been here twice before, based on the hordes of fans who came to see him at the Benchsetter Fun Meet at Smart Araneta Coliseum last week.

What keeps “The Heirs” actor coming back to Manila? “I love the fresh fruit shakes, especially mango juice,” Min Ho said with a smile.

He was comfortably dressed in a Bench denim shirt with white paisley print and jeans which he picked himself. “What do you think?” he asked. After telling him that he looked good, he laughed. It was evident that he was comfortable in his own skin, jovial and warm to fans and to people he meets.

He mentioned that he was busy doing shoots for different brands (his own shoot with Bench was scheduled the following day), as well as filming for shows. Min Ho is obviously so busy that when we asked him what he did during his spare time, he said he didn’t have any. “If I do get the chance to have spare time, I just wanna rest and do nothing,” he said.

When asked what he thought was different about his role in “Boys Over Flowers” and “The Heirs,” he paused before saying, “The biggest difference between the two was that I had curly hair in ‘Boys Over Flowers’ while I had straight hair in ‘The Heirs.’”

He added, “In ‘Boys Over Flowers,’ my character was a straightforward guy—he thinks then acts upon it right away. In ‘The Heirs,’ he’s more of a deep thinker; he reflects on what he did in the past and becomes responsible for what he does.” He said he loved that each character had different emotions. “It helps me reflect and gain new ideas and views,” Min Ho said.

He has the hunky rich boy role down pat. Are there any other characters he’d like to portray? “There are many roles to play,” he said, “many jobs available, but I want to try different things. Because I’m getting older and older, I want to try a role that will depict childhood innocence.”

Fans already know this, but there is actually a Lee Min Ho figure at Madame Tussaud’s in Shanghai.  We asked Lee what he thought of his inanimate life-size replica. “At first I thought it didn’t look similar to me, but after seeing many fans uploading it, I’ve gotten familiar with it, and I think it’s similar,” he said, laughing.

Lee Min Ho has been longtime favorite model for Bench, and it’s easy to see why. His endorsement is very effective, his enduring appeal with the fans evident, and he looks good wearing Bench. His latest campaign for the brand includes not just apparel, but scents as well.

On the other side of the equation, Lee said that he loves Bench because it helps him reach fans. “I’m very satisfied that I can communicate with lots of Filipino fans because it helps me to become closer to them. That’s the great part about being with Bench.”

Asked what he loves about his Filipino fans, Min Ho answered, “They’re very enthusiastic, warm-hearted; they always smile and they’re very hospitable to me.”