Padre Pio, miracle worker; or how in life there are no coincidences, only ‘Godincidences’ | Lifestyle.INQ ❮ ❯ BOOK launch of “A Spiritual Son is Born” by Campos at the Wack Wack Golf and Country Club, Mandaluyong City PHOTOS BY LEO M. SABANGAN II

Padre Pio, miracle worker; or how in life there are no coincidences, only ‘Godincidences’ 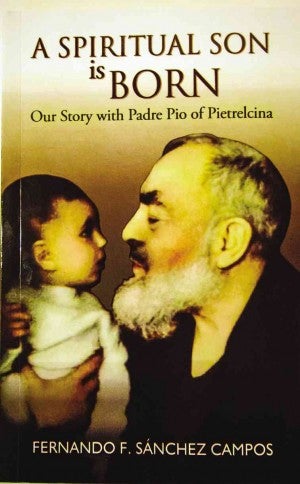 Normally, the story of a politician who decides to put God ahead of everything else would be a work of fiction. Not in this case.

Fernando F. Sanchez Campos, the ambassador of Costa Rica to the Holy See, was a neophyte congressman in his country’s legislative assembly when his wife Milagro gave birth on Sept. 18, 2007, to their firstborn.

But the infant Fernando Felipe was found to be suffering from a severe cardiac condition called aerial flutter that caused his heart to beat more than 220 times per minute, “a rate higher than any adult could bear,” his mother noted.

While recuperating, Milagro herself developed a severe infection that left both kidneys functioning at a mere 30 percent of their normal capacity.

Ambassador Sanchez said it was only through prayers to Padre Pio, the Franciscan Capuchin priest well-known for bearing the stigmata, that his wife and son made a speedy and miraculous recovery.

Padre Pio drew global attention in the middle of the last century for his well-attended Masses and his patience while hearing confession. He was reported to have the powers of healing, clairvoyance and bilocation. But he also endured intense physical and spiritual suffering, especially since he was given the stigmata, the marks of Christ’s crucifixion. Pope John Paul II canonized Padre Pio in 2002.

On March 24, Sanchez flew into town to attend the launch of the book’s English translation that also narrates his ongoing journey toward finding spiritual strength through prayers to Padre Pio.

The book’s trip to Manila began in October 2011 when Sanchez invited Mercedes Arrastia Tuason, the country’s ambassador to the Holy See, to the launch of the book’s Italian translation.

It was Tuason’s idea to translate the book to English so that more readers would enjoy it.

“Immediately,” she said, “we thought of this book as an enormous spiritual treasure that had to be brought to the English-speaking world. The idea of  ‘A Spiritual Son Is Born: Our Story with Padre Pio of Pietrelcina’ was conceived.”

Launching the English edition in Manila was, of course, nonnegotiable, but Tuason said the effort was not without its challenges.

But those who collaborated, including Josephine E. Bantug, whom the ambassador described as “my able bully,” Bantug’s son Leandro and translator Lourdes Leonora R. Mendoza, confidently operated under Padre Pio’s ethic, “Pray, hope and don’t worry.”

The saint’s followers are wont to tell anyone that these famous words could not be dismissed as a simple statement, like corporate slogans mouthed during team-building activities.

Sanchez’s book is replete with recollections of how difficulties encountered in life are overcome by constant prayer.

At the height of the family crisis, Sanchez said he “felt completely broken” due to the triple whammy of his son’s and wife’s illnesses along with “the crisis I was experiencing in my career (there were people trying to put an end to my new job, to my political career).”

However, he realized that “only the power of my faith could sustain me and finally I gave everything up to God… I had done a lot of praying, but it always felt like I was the one trying to control the situation placed before me.”

It was only when Sanchez decided to detach himself from everything and offer it all up to the Lord that he knew he had only to “move out of the way and let The Boss take over and fulfill (H)is divine will.”

One night, while Sanchez made tireless trips between the nursery where little Fernando was and the hospital room where Milagro was confined, he was surprised to see Fr. Gabriel Corrales, parish priest of Coronado in San José, Costa Rica, armed with a relic from Padre Pio and praying over his son.

It was then that the two patients’ recovery begun.

Included in the book is Fr. Corrales’ own narration of the circumstances of his arrival at the hospital and how he was admitted to the nursery despite being a stranger. The passage  would elicit goose bumps from the readers.

As Sanchez said, there are no coincidences, only “Godincidences” proving that there is a divine power at work in the lives of people in a crisis.

A significant portion of the book details 203 messages from God that Sanchez gathered from both traditional sources like  “biblical passages, sacred songs, phrases from saints, extracts from books of spiritual leanings, homilies or advice from priests or friends who are very spiritual, etc.,” and the “unorthodox” including “passages from posters, graffiti on the walls, messages in shirts, car stickers, publicity advertisements, and even isolated phrases spontaneously [uttered] during casual conversations with sports trainers or by artists in children’s musicals, among others.”

The insights of Sanchez’s wife Milagro are included.

“God brought about a miracle in our lives and Padre Pio interceded for this miracle to happen,” she writes. “Wherever we are, whatever situation we find ourselves in, prayer works.  Difficult moments are sometimes God’s way of making us realize things we may not have otherwise and of teaching us appreciation.  When we go through trials, we must ask God to help us and have a lot of faith.  The Lord listens to our petitions, God exists and we have to live eternally grateful to (H)im.”

Believers of Padre Pio said the saint is usually invoked in “the healing of the sick, freedom from psychological problems, pregnancies in women whose doctors claimed were barren, finding work after long periods of unemployment, the reconciliation of couples, success in studies, and even the blessing of a good and peaceful death…”

Sanchez’s personal encounter with God and prayer not only made him survive his political debut.

Archbishop José Rafael Quiros of San José, Costa Rica, said Sanchez became a “strong defender of life and has fearlessly and publicly expressed his adhesion to the teachings of the Church on… ethically based topics which are highly questioned these days.”

At the launch, Cardinal Tagle reminded the faithful that in situations when a believer decides to ask for a saint’s intercession, “it was actually the saint who chose (to help) us, to bring us closer to God.”

Any reader who has been through intense physical, emotional or psychological pain would recognize the reassuring voice of God speaking through Sanchez’s book.