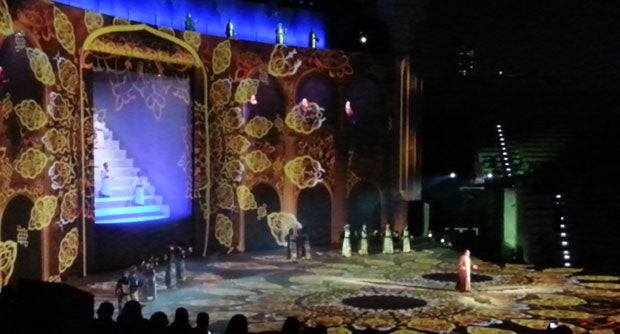 An epic battle scene takes place both on stage and on screen through the use of high definition projectors that show a battlefield on the huge forty-foot backdrop. Video by Matikas Santos/INQUIRER.net

The “Clusters of Light” show was mesmerizing for its use of many projectors that bathed the entire stage, including the around 40-feet tall backdrop, in a constantly changing setting from a war with thousands of soldiers and huge elephants to a serene star-lit night with the bright crescent moon.

“The work delivers a world message which the world is entitled to hear. A message that humanity needs today more than any other time. A message about Islam the religion that is encompassing, tolerant, peaceful, and human,” Wassim Rizk, Managing Partner of the show’s producers Multiple and Spinifex Group, said in a statement.

Worth $38 million (AED140 million), the newly constructed 4,500-seater Al Majaz Amphitheatre provided the venue for the ground-breaking spectacle that premiered as the highlight of the Islamic  Culture celebrations.

The theater was built with state-of-the-art light and sound technology said to be “used for the first time in this part of the world.”

The centerpiece of the stage is a large cube, similar to the sacred Kaaba of Islam, that enters and leaves the stage through large doors built into the backdrop. Visual effects are projected onto the four sides of the cube even as it rotates while on the middle of the stage.

The cube is hollow containing inside a set of stairs where several actors perform during certain scenes. At one point, an actor climbs a rope ladder on one corner of the cube and upon reaching the top, performs the adhan, or the Islamic call to worship.

An intense and pivotal part of the show was during scene six where a battle involving thousands of soldiers was projected on the huge backdrop while actors fought against each other on stage. At one point, the soldiers had bows and acted like they were firing against enemy soldiers, then the screen showed the arrows as they are flying through the sky and into enemy lines.

Remote-controlled drones flying in synchronized movements were utilized to show floating lights just behind and above the stadium during certain scenes.

The sheer scale of the production was epic involving around 200 actors on stage at certain points and a technical crew of around 750 more.

Well-known Arab singers Hussain Al Jassmi, Ali Hajjar, Lotfi Bouchnak, and Mohammed Assaf blew away the crowd with their impressive vocals as they sang the story of Islam’s beginnings.

On whether the Arabic language show will be brought to other parts of the world after its premiere performance, Wassim said it’s up to the Emirate of Sharjah.

“The way we see it, ‘Clusters Of Light’ can tour throughout our region and beyond. I think the West in particular would be interested to see a production of this scale that has been developed in our region,” he said.

Never before seen special effects to cap inauguration of Sharjah