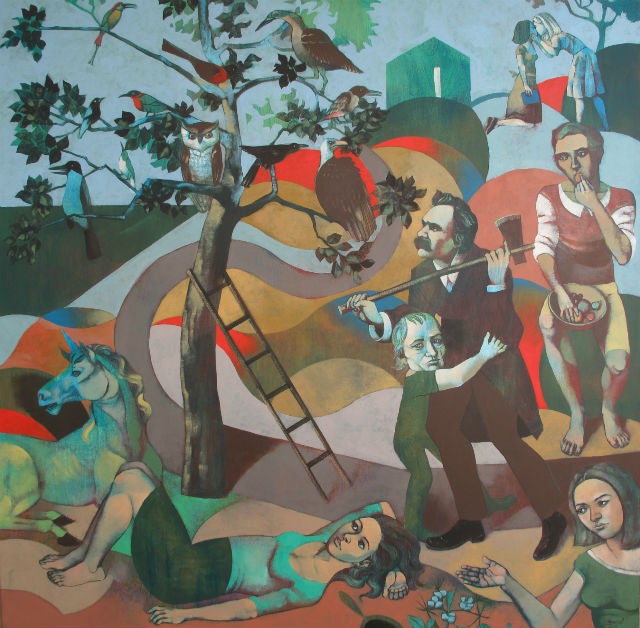 MANILA, Philippines – As a development in Marcel Antonio’s art, the artist’s new collection – due to be shown at Greenbelt 5’s The Gallery from April 3 to 6 – will present Antonio’s new dive into more serious symbolism, leaving his previous ambivalence between composing quasi-narrative and pseudo-narrative scenes. Those previous works were intentionally open texts that catered to various readings, oftentimes also making his art akin to the surrealist bent.

But the “closed-text” symbolism in the present collection – done through the stretch of 2013 – is more inward than not, strictly referring to the concerns of the artist through the years as well as to the expressionist option that Antonio’s art is supposedly trying to veer away from.

Familiar Antonio images of concerns mundane (card games), deep (zoology study), and routine-economic (workers and vocations), may seem to continue Antonio’s preference for portrait faces that defy expression (and expressionism) to play up a drama of thinking that in turn inspires viewers to inhabit a world of contemplation and symbology. But the present works also offer to represent Antonio’s transformation from being an artist of a previous “blue funk erotica” (concerned with ennui and sleep and apolitical contentment and how these, together, function as a social fetish) to being an artist of a blue funk erotica with a new direction.

In years previous, Antonio’s open-text BFE rested luxuriantly behind his quasi- and pseudo- narratives as well as in his illustration of various existing literary narratives that actually turned out to be BFE variations on the original stories. The 2013 transformation leads up to momentarily (or maybe permanently) leave the poststructuralist openness of the artist’s older paintings.

Today, in his ennui- or tiredness-filled world of human figures inhabiting their everyday vocations (and where dramatic expressionism is the mere luxury of his animal figures), Marxist readings of a worker/capitalist or subject/royalty or powerless/powerful relationship in his new paintings’ characters are defeated by the visceral quiet or hidden misery beneath them. This blank-faced quiet misery is embedded in the overwhelming contentedness of the characters’ faces, but its aura is such that it doesn’t matter whether it derives from a political or psychological cause. Technique-wise, the artist also seems to illustrate (or celebrate) an aesthetic contentedness independent of, or free from, the tempting shock methodology of expressionism.

It is context that often frustrates an expressionist reading upon even his more expressive portrait faces – one such portrait face might end up as nothing more than a portrait of submission to a job’s requirement instead of a tantrum. Antonio’s symbolist genius is in working through a Lee Strasberg device (acting) to method-act his characters through to a way of expression that dismisses the expressionist need to screech or howl or sneer.

As defiance against these self-centered tantrums in expressionism, Antonio shows in some pieces how his characters’ sort of postmodern self-deprecation becomes by itself self-alienating, resulting in a cool denial of identity, even dignity. After this fact, all other de Chirico-esque objects in his compositions, as well as animal figures, also become themselves mirrors for the lost self.

Accoutrements become mirrors for this self-alienation, and animals are mirrors for contemplating the relationship between self and those living others (thus leaving anthropocentrism on the porch). A mulling over one’s nudity becomes a meditation on one’s place in the existing interrelationships in nature and on one’s humanity within the ecology. But lest we equate this curiosity solely with intellectual reflection (in a zoologist character, perhaps), Antonio illustrates that this curiosity can turn into a quiet fear, present in the self’s denial of his self by way of escaping intellection and falling for the freedom of socializing (card games, perhaps) or hobbies like sewing.

In the new upcoming show, we come full circle to a more or less full understanding of Antonio’s obsession with ennui in the years past. We realize that the artist was not simply illustrating “boredom,” the way ennui translates into English, but man’s estranged relationship with a challenging world. But while other artists in the past and present would have illustrated such an alienation with the smile of a self-deprecating humour or self-effacement, Antonio illustrates it with faces of reflection (science, magic), activities of contrivance (religion, myth-making, story-making), and/or faces of indifference (the ennui we see) and subtle or silent detestation.

Subtlety is the secret to Antonio’s Lee Strasbergian series of dramas inhabited by bored actors struggling to kill time in their respective chosen interests – as mere workers for (or subjects to) a giant hand of power. In this nice habit of inhabiting many of his scenes with “workers,” modern-day inhabitants people the paintings to go about their business (is Antonio mocking or emulating grade school social studies textbook illustrations?). But the faces are invariably expressionless, with some asleep. In that sense, even Diego Rivera’s Marxist expressionism seems to be getting a kicking in these river of Antonio dramas.

The Antonio thesis is certainly not dead in its tracks just yet. The present collection’s dizzying array of significances might even signal that it has only just begun.