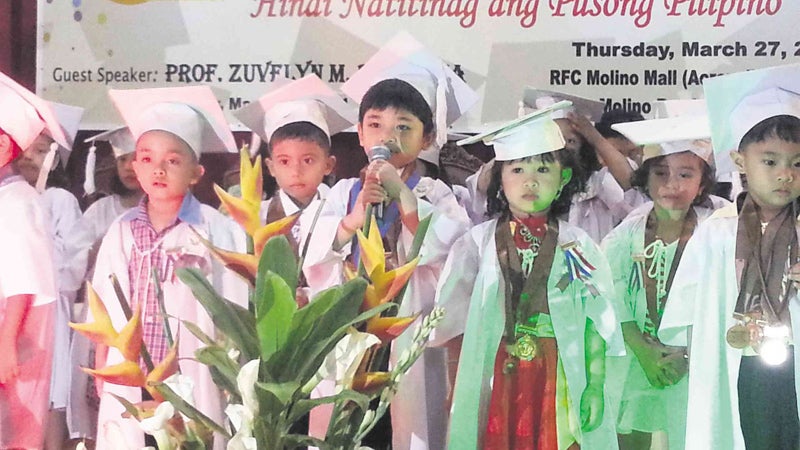 I wanted to argue but had to grudgingly bow to authority. The school principal had just asserted her bullheadedness in requiring my son, PJ, who topped his kindergarten class, to deliver a speech on graduation day.

“Ang theme natin,” she said a few days before I pleaded my case, “ay ‘Hindi Natitinag ang Pusong Pilipino.’” By that she meant the oft-cited resiliency of the Filipino in light of recent calamities.

The thing that bothered me is why my kid, who is only 5 years old, had to memorize a piece on such a serious topic. Can he just read from a paper, I asked the principal, so that he can also demonstrate his impressive reading skills?

But she was adamant, it had to be memorized; the only word I could figure out from her explanation was, “substance.” Huh?

Oh well, I thought, the challenge now was for me, the so-called writer in the family, to draft the most simply worded text that my boy could understand, “internalize” and deliver with “conviction” on the Big Day.

I had one day to write it; he had two weeks to memorize.

The night before I set out to scribble the speech, I drank a few beers and let my thoughts wander. I smiled as I looked back on the years that my child spent learning about the alphabet, numbers and other primary lessons from his first teacher, my wife Mylene.

It was Mylene who decided to enroll PJ in nursery school when he turned three. He turned out to be a fast learner, because he could write his name, among other things, by the end of that year.

He was even “accelerated”—jumping to K-2 without the need to go through K-1 after taking an entrance test in the new school near our house.

There were nights, after PJ started attending regular classes, when Mylene would proudly update me of developments—how PJ earned a “star” or a “very good” stamp for participating in recitation or answering correctly in periodic exams.

But there were instances, too, when she would vent her frustration, how damn hard it took for the child to concentrate on homework because he would insist on playing first with his Tomica cars and miniature dinosaurs, or watch cartoons on DVD.

And yet all of Mylene’s efforts were paying off. After landing second and third in the first and second grading periods, respectively, PJ grabbed the top spot in the crucial third period. And when I attended the final deliberations at the end of the school year, the principal announced that PJ was No. 1 in two K-2 classes.

Which brought me back to my assignment—writing a graduation speech for a 5-year-old kid. I tried to make it as simple as possible by recalling a moment, immediately after Supertyphoon “Yolanda” struck, when PJ asked why I was crying.

I told him how deeply affected I was about the people whose families died in the storm, and how fortunate he was to be safe and alive, with good food to eat, and many toys to play with.

I put all that in writing, along with this: “I am only 5 years old and could not really understand the situation, because I have not experienced hunger or the death of a loved one.”

And then this, which I hoped PJ would comprehend as he grows up: “But time will come when I will appreciate why, in spite of disasters, Filipinos never lose hope. Filipinos always rise up, no matter how bad our situation is. Perhaps it’s due to our faith in God…”

A child’s brain, I soon discovered, is like a sponge—because wonder of wonders, PJ had his one-page speech stored in his memory in two days!

But on the Big Day itself, I thought of a contingency plan in case he stops and forgets a line. I myself would go up the stage and give PJ a hard copy of the speech. But just before I ask him to read aloud to finish it, I would speak on the mic about how ridiculous this whole thing is.

Thankfully, PJ did not need my assistance, and I never had the chance to embarrass the principal as well as myself.

But I still believe PJ should not have been asked for that kind of speech, because even if he had delivered it successfully, I doubt if anyone in the audience listened to it—the auditorium’s acoustics was bad, with the irritating roar of giant electric fans that supplemented the air-conditioning system.

At the end of the program, all the K-2 students gathered onstage to sing an inspirational tune. That was when I started getting really embarrassed because PJ was not following the choreography. I couldn’t understand why he was turning his head around like he was looking for something.

The answer came a few seconds later: somebody was late in handing out the mic to PJ, who was the designated lead vocalist.

Now I have something exciting to think about, maybe to lessen the pressure for him to maintain his status as honor student. He could form a band in the future and I could be his manager.

But for now, being first honor is not bad at all—it comes with a 50-percent discount off his tuition.