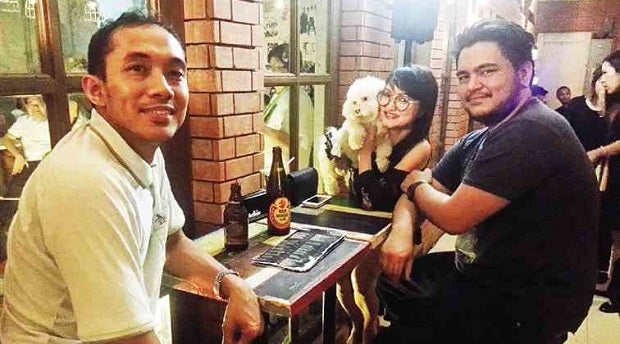 Back in the late 1980s, we remember a restaurant named Crazy Daisy at the corner of Timog Avenue and Scout Tobias, Quezon City. It became a hangout of artists and musicians waiting for the live gigs to start at Red Rocks (later renamed Club Dredd) next door.

When Crazy Daisy closed shop, its owner, Daisy Langenegger, continued serving good food in her residence at 20 Maginhawa St., UP Village, where her wide circle of friends congregated regularly.

Now she has opened Green Daisy, an al fresco dining and drinking place in her garden. At Green Daisy’s recent launch, the party got going with a freewheeling jam instigated by visual artist Romeo Lee and musicians Chickoy Pura and Dong Abay.

We got there around midnight and found Daisy in her element, as she pointed out that the ingredients in her menu comes from her property in Isabela, where she does organic farming.

Most of the food had run out; organic vegetable salad and beer were not exactly an ideal pair, but we didn’t mind ’cause the stimulating conversation made all the difference.

The music that night included some Talking Heads, just like old times.

Further down the road from Maginhawa across Kalayaan Avenue is Matalino Street, where a few old haunts provide warm nourishment to night owls before or after they go gallivanting.

There’s a Kowloon House counter with several tables, open 24 hours, where one can enjoy beef, wanton or chicken mami as well as siopao and siomai at affordable prices. San Miguel Pale and Light go for P50.

We always go back to Trellis every time we feel like having a few drinks on Matalino Street. The restaurant, which opened in 1980, has gotten bigger and still attracts regular diners.

At night the crowd is usually composed of middle-aged professionals, barkada and couples who don’t mind Trellis having no air-conditioning.

We don’t even remember if there is piped-in music, because our attention is focused on the spicy spareribs. Beer is cheap at P40.

A pleasant surprise is that Little Quiapo is still around, though it has moved from its original location on Matalino to 90 Malakas Street.

When we visited, we met the widow of veteran newsman Manuel Salak, Violy, who insisted that we order Little Quiapo’s signature merienda fare, pancit palabok and halo-halo. We wanted to tell her that there’s no better noodle dish for us than the pride of our hometown, pancit Malabon, and the best halo-halo, for us, is Razons’—but we tried Little Quiapo’s versions anyway.

Its palabok was too saucy, although its halo-halo could hold its own against the likes of Chowking and Digman.

But Little Quiapo’s lomi is one of the best we’ve tasted. The place is really about good old comfort food, so we had to find our alcohol fix somewhere else.

Over at Scout Madriñan, Quezon City nightlife has gotten better with Tomato Kick, the small club that features hot gigs, and Poppins, a cozy little restaurant that has interesting canned music.

On Thursdays and Saturdays, Poppins co-owner JC Buendia—yes, the fashion designer—programs the music, all from his personal collection.

On Saturday nights he favors house music, which he sets at an ideal volume level that allows customers to talk without shouting at each other.

Thursday nights follow the current “throwback” trend, which simply means retro music. At Poppins it’s disco classics including the Tavares version of “More Than a Woman.”

The food is great—the southern fried chicken lived up to its Cajun-inspired flavor, and the battered fish fillet had an interesting side dish, sweet potato.

But the biggest come-on has got to be the cheap beer—San Mig Pale and Light at P45, though we felt deprived that Pale Pilsen has been out of stock for sometime.

Then again, the Merlot wine was fine at P600 a bottle.