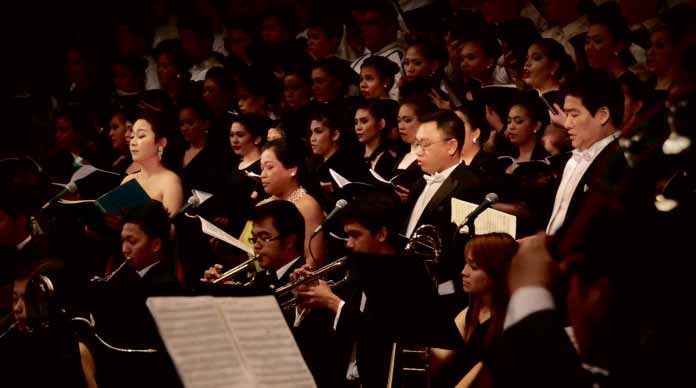 Perking up the musical scene recently was a bouquet of classical concerts.

An Ayala Museum date by Korean classical singers, soprano Yun Kyoung Yi and baritone Daesan No, with Filipino collaborative pianist Najib Ismail, has become the talk of the town.

The duo impressed the audience with familiar solo numbers as well as operatic arias. They had previously impressed local audience in their sterling essaying of the lead roles in Verdi’s opera, “La Traviata,” at the Cultural Center of the Philippines two years ago.

Both singers are schooled in the bel canto tradition. They sing quite naturally with their voices smoothly (legato) intact in the passage. Their high notes are saucy and brilliantly projected.

The voice of the soprano is heavenly, velvety and evenly placed, indeed, world-class, a rare gift. During the concert, she sounded so magnificently her voice did not show any tiredness at all and remained fresh up to the end.

Equally impressive was the baritone whose voice was likewise brilliantly projected.

At the piano, Ismael played with gusto. He has become the most seen collaborative pianist, having played likewise before  with the internationally known Sumi Jo, the Grammy-winning Korean soprano.

Yun Kyoung Yi has the facility of the coloratura, but the sheen of her voice is unmistakably that of a lyric soprano. The runs and embellishments were clear and kept as light as possible. This was evidently shown in Mozart’s “Laudamus Te” from The “C Minor Mass,” and the more peppery aria “O luce di quest’ anima” from Donizetti’s  (Linda di Chiamounix).

In the duet “Pura siccome un angelo” by Verdi (La Traviata) she essayed with baritone Daesan No, she was intensely lyrical, matching the lyric quality of the baritone’s voice.

They sung the duet with much integrity that greatly moved the audience. The soprano was visibly moved so she was nearly in tears toward the end.

They were rewarded with  shouts of “bravos” and thunderous applause from the audience.

‘Tribute to the Thomasian’

The Korean singers were heard again as soloists in Beethoven’s Ninth Symphony of the annual concert, “Tribute to the Thomasian,” featuring the University of Santo Tomas (UST) Symphony Orchestra, at the Cultural Center of the Philippines.

Jae-Joon Lee, another Korean who has become familiar to the local audience on account of his guest conducting stints, conducted the UST Symphony Orchestra.

It was a welcome sight seeing the orchestra’s resident conductor  Herminigildo Ranera joining the musicians and playing the French horn.

A composite choir was made up of UST’s top choirs,  such as Coro Tomasino with Ronan Ferrer, conductor; Liturgikon Vocal Ensemble, with Alisanta Cortes, conductor, and of course, the intenationally acclaimed  UST Singers with Fidel Calalang, conductor.

Calalang was the overall chorus master. Needless to say, the chorus sounded brilliantly.

Under the baton of  Lee, the UST Symphony Orchestra produced brilliant renditions of Mozart’s Overture from  “The Marriage of Figaro” and Beethoven’s Ninth.

The orchestra also showed its adeptness in collaborating with the seasoned concert pianist, Fr. Manuel P. Maramba, OSB, in Schumann’s “Piano Concerto in A minor, Op. 54.”

This year, Father Maramba celebrates his diamond jubilee as a musician. A faculty member of the UST Conservatory of Music, the Benedictine priest is a concert pianist, composer and theorist.

In his late 70s, the good father is still reliable on the piano. His memory is still sharp and focused, and his rhythmic drive solid. He and the conductor were in tight rapport. They brought out the witty dialogue between the piano and orchestra that highlights Schumann’s grand pianism.

Young pianist Liza Zheng has put up an art foundation that carries her name and it had a soft launch recently at the family’s residence in Forbes Park.

Liza is the daughter of painter and Asian Development Bank advisor Liping Zheng and Jianping Zheng.

Attended by an intimate number of musicians and art lovers, Liping said that the foundation is informally established, adding that he will lead a campaign from his relatives and friends to donate money to promote Philippine performing and visual arts.

Liza gave a recital last year and impressively essayed two concertos with the Manila Symphony Orchestra (MSO). Impressed by the sterling performance of the MSO despite its inadequate financial resources,  Liping pledged to raise funds for the purchase of a harp to be donated to the MSO.

This need was felt in the playing of “The Yellow River Concerto,” that necessitated a harp. The pianist’s family had to go to the trouble of renting a harp.

Liza said that while it is easy to campaign for relief funds for the victims of calamities, musicians and artists find it hard to solicit funds for their artistic advancement. This is the primary reason why she thought of putting up the foundation.