Minutes into the band’s first show at Amber Ultra Lounge the next day, she got her answer. The audience jumped, screamed and sang along to “Koo Koo Koo,” the first song of a 90-minute set. And they sang along to every song after. “You guys are nuts!” Kimi told the energetic crowd. They cheered.

Before the show started, giddy friends greeted one another, all excited to finally see a band that has been on their concert bucket list.

They were understandably enthusiastic—they had been waiting for this show for 18 years.

The California-based Filipino-American band’s unique sound got the attention of music fans everywhere including the Philippines after the release of its album “Lucky Dumpling” in 1995.

In 1996, when the band was here for its Star City Expo concert, Kimi had no idea that she was pregnant with her first child with Jay Jay Encarnacion, the band’s guitarist.

That pregnancy became the reason Elektra dropped the    band in the middle of recording “12 Songs,” its second album with the record label. Kimi said, “At first, we thought, I’ll have this baby and then we’ll go back and we’ll pick it up. I had the baby and we just never really picked it up.”

Fans, who had always wondered why Moonpools disappeared from the music scene, never let go of their love for the band. They played their “Lucky Dumpling” cassette tapes until they broke and took their favorite Moonpools songs with them as they transitioned from tape to CD to iPod.

This week, things have come full circle. Kimi and Jay Jay’s son Rocky, now 17 years old, and their younger son Byron, were with them to witness the band’s Philippine comeback.

Kimi, who turned emotional at the press con, said, “My son is here… It’s such a gift to be sitting here. The Philippines is bringing us a huge, huge gift this week… It’s like this huge wedding cake with icing on top of it, just tons and tons of icing. It really is a treat.”

Although they stayed friends through the years, it was drummer Gugut Salgado’s wife who got the band to play together again.

“She said, ‘I’m tired of hearing about the band days, why don’t you guys just get off it and play?’ And so we did. She set up a show and we did that. Fans came from all over the United States to be there. When the typhoon (‘Yolanda’) hit, we started selling T-shirts and then people said, ‘Do a show.’ We did an LA show and that was really fun and that sold out,” Kimi said. The band raised $21,000 for the survivors of Yolanda.

“That’s when the shows here started taking shape,” she said.

Online music portal Pinoytuner brought Moonpools to the Philippines for shows in Manila and Cebu. Kimi said, “A lot of people talked about it but Pinoytuner did it.”

Jay Jay said, “They had the courage and they’re the risk-takers that brought us here.”

It was a move that loyal fans were thankful for—and they showed their gratitude by snapping up tickets so fast that Pinoytuner had to add a second Manila date.

Tim said, “Everyone would always say, ‘Do a show in Manila! Go to Manila!’ even though we weren’t really doing any shows anymore. It’s an honor to have this much interest in us. It’s great. It’s definitely unexpected.”

Kimi said, “When we first started our Facebook page, I looked at the numbers and there were 6,000 or so followers right away, and probably 4,500 of them were Filipino.”

At the press con, numerous questions were asked (“What’s your ultimate direction?” “Will you be releasing a new album?” “Where will you pursue your music career?”) but they all meant the same thing: Are they back for good? 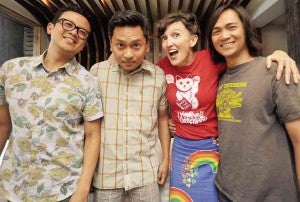 “We’re not sure. We’re just flying by the seat of our pants right now,” Kimi said.

Jay Jay said, “We don’t have any plans. We’re just enjoying this.”

“We don’t know what the future looks like,” Kimi added.

But, she said, Gugut e-mails her new songs every day. “They’re great songs. It’s stuff that not a lot of people are doing. It’s pretty exciting.”

For now, fans have memories of those three incredible shows to hold on to. Kimi said, “We knew the people who would be coming would be hardcore fans. They’re here and they’re paying the money for that ticket. They want to hear what’s on that little cassette tape that they wore out 15 years ago.”

So Moonpools played all the fan favorites from the “Lucky Dumpling” album—“Soon,” “Ren,” “Colossal Youth,” “Trampling Rose,” “Traveling Song,” “Crazy Old World,” “Hear.” Kimi said, “You know the words better than I know the words, so just keep singing along and I’ll catch up with you.”

You could see the band’s fans trying to squeeze all they could out of the show, singing until they were sore, taking endless photos and videos, getting their hands on the hard-to-find “12 Songs” CD along with Moonpools and Caterpillars shirts and stickers.

A lucky fan got one of Gugut’s drumsticks. Others caught “Lucky Dumpling” cans that the band threw into the air. Someone grabbed the setlist.

But the fans weren’t the only ones relishing the moment. The band was, too. “When I actually play with these guys coupled with the energy from the crowd, I can’t replace that,” said Jay Jay.

Tim said, “You can’t describe it. When everything clicks in with these guys, it’s just like, oh man, it’s in the zone and it’s kicking and it’s powerful.”

Gugut said, “You don’t have to say anything. When you connect with the fans, with each other through music. You’re sharing something but it’s hard to describe. It’s a feeling between each other, between the band and the audience. For that hour, everyone’s in tune with each other.”

One of our favorite moments from the show was when Kimi asked the crowd to quiet down to listen to Jay Jay sing the first few lines of the Juan Dela Cruz Band classic, “Ang Himig Natin.” Kimi joined in. It was a beautiful, goosebumps-inducing moment.

The crowd hollered for more, and Kimi returned to the stage, singing an a cappella version of “Melt With You.”

Moonpools then segued into its famous cover of another Juan Dela Cruz song, “Beep Beep,” which the crowd had been screaming for.

Kimi had fun singing the Tagalog song and playfully hollering words like “paksiw na lechon” and “tapsilog” while the crowd cheered.

“Asawa ko, Pilipino!” she hollered and everyone screamed.

“Kiss! Kiss!” the audience chanted, and Kimi gave Jay Jay a playful smack. “I kiss him all the time, just not in front of everybody.” The audience laughed.

The laughter stopped as the band played its final song, “Heaven,” a touching anthem also from “Lucky Dumpling.” Some audience members had tears in their eyes and we could have sworn we saw the band getting teary-eyed, too.

“We’re just as excited to meet you. We want you to know what a treat this is for us. To be here in the Philippines is great because you’ve always been one of our favorite audiences,” said Kimi.

On the way out of Amber, two guys jostled each other, “Pare, naiyak ka ba?”

Gugut said, “It’s a blessing. I forgot what that was like. We lost that for 15 years. Playing again is just like, wow, this is what it felt like. I’m glad we’re doing it again.”

It was a concert but it felt more like a reunion—the homecoming of a beloved band and a dream come true for the fans who have stayed faithful to them for close to two decades.