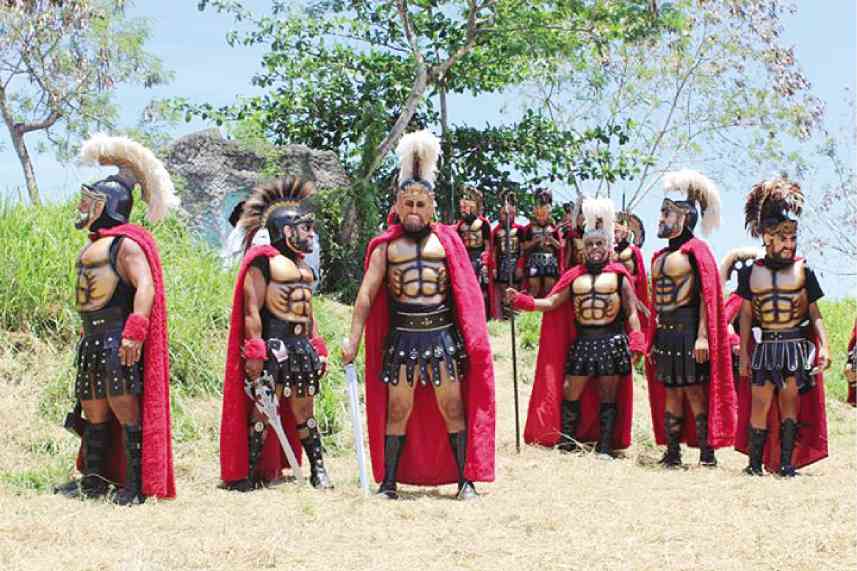 Marinduque in our mind

As a travel destination, Marinduque is a treasure trove of wonders waiting to be discovered. The island province is sometimes called the “heart of the Philippines” owing to two reasons: First, the province is located in what is considered the geographical center of the country; and second, Marinduque, viewed from above takes the shape of a heart.

But there is a third reason, for the people of Marinduque have got to be among the friendliest in the entire world. Marinduque is populated by people who have big hearts.

Perhaps it is not too hard to explain why locals are always in good spirits. The province, relatively tiny as it is, seems to have been able to preserve much of its unique culture and sublime natural environment.

Marinduque is best known for the Moriones festival. The festival originated in Mogpog and is today also held in Boac, the provincial capital, as well as the municipalities of Gasan, Santa Cruz and Buenavista. The Moriones, held every year during the Lenten season, is a reenactment of the story of Longinus.

As the legend goes, Longinus was a Roman centurion who pierced the side of Jesus Christ while the latter was nailed to the cross. A drop of blood falls on Longinus’ one blind eye, miraculously restoring his vision. Longinus converts to Christianity, prompting Roman soldiers to capture and behead him as punishment.

Countless travelers make the pilgrimage to Marinduque to witness centuries-old tradition, where actors roam the streets for several days as they search for Longinus. The participants are not professional actors, but local penitents who parade in colorful costumes and beautifully handcrafted wooden masks.

Aside from its world-famous Lenten tradition, Marinduque is also remarkable for its stunning natural wonders. Inland there are wonderful, rarely trekked mountain trails such as those in Barangay Sibuyao in the municipality of Torrijos.

A tricycle can only travel so far up the rocky trails of Sibuyao. Here it is best to get a guide for the three-hour trek to Hinulugan Falls. It would be best for hikers to take rest stops on the way up in order to appreciate majestic views of rice terraces on the mountain and of Sibuyan Sea. The Sibuyan Sea separates Luzon and the Visayas, and is also the site of an epic 1944 sea battle between US submarines and the Japanese battleship Musashi.

Speaking of historical battles, the Pulang Lupa Shrine in Torrijos stands as a monument to the first significant victory by Filipinos against the US during the Philippine-American War.

Around Marinduque are several magnificent caves, such as the Tarug and the Bathala cave systems, both in Mogpog. The caves are home to diverse species of bats and snakes and tend to be magnificent structures.

The Bathala cave system alone is replete with stunning chambers that have given birth to many fascinating stories. There is the Church Cave, so called because of its cathedral-like capaciousness. There is the Python Cave which is home to at least 11 pythons. And there is the burial site known as Cemetery Cave. Here archeological explorations have recovered pieces of china, earthen jars and several human skulls.

Then there is also the San Isidro Cave and Subterranean River in the municipality of Sta. Cruz. The cave itself has long been surrounded by an air of mystery, with various tales of supernatural occurrences associated with the cave. But in 2009, local tourism officials discovered the presence of an underwater river that runs inside the San Isidro Cave.

The province’s cave ecosystem plays host to a variety of plant and animal life. It plays a vital role in preserving the country’s culture and environment. Therefore local officials are mindful of the need to make conservation an integral part of its efforts to promote Marinduque’s caves as eco-tourism destinations.

For travelers inclined to do some beach-combing or go island-hopping, visiting Marinduque can be an experience of a lifetime. Lovely beaches can be found on all sides, with Poctoy White Beach being one of the better known beaches. The Poctoy White Beach is a long strip of white sand in Torrijos. It has a nice view of Mt. Malindig to the south.

There are also many islets that can be reached by fishing boat. From Gasan, one can go to the islands of Melchor, Gaspar and Baltazar, collectively known as Tres Reyes Islands. And from Sta. Cruz, one can go to Maniwaya Island. One can just relax on the island by sitting on its lovely sandbar, boarded on each side by the sparkling blue waters of the sea. Marinduque is also a paradise for divers, as Gaspar is also a marine reserve that is great for marine-life-lovers to explore.

To sum up the province, one can simply say that the wonders are many and the people are warm-hearted. There is much to discover in Marinduque. The province is just waiting for travelers to delight in its many secrets.

Via Crucis at 10 a.m., Boac Poblacion

Salubong at 3:30 a.m. at Boac Poblacion (Reenactment of Mother Mary’s dawn meeting with the Resurrected Christ)