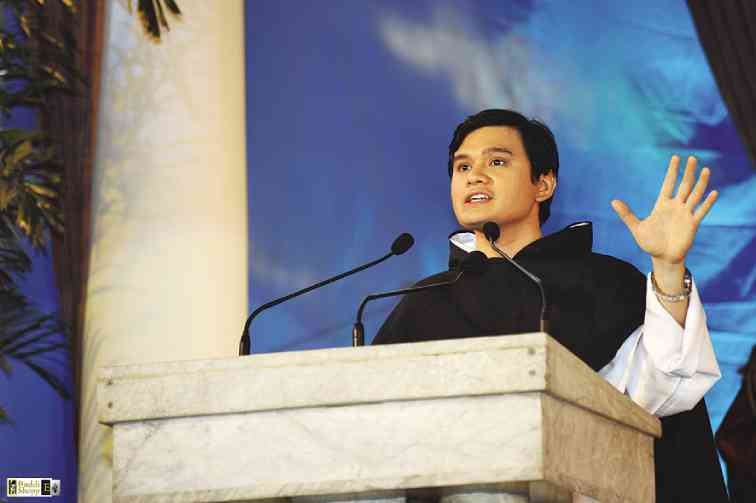 A Dominican preacher expounds on one of the Seven Last Words.

The “pabasa,” or the chanting of the passion, death and resurrection of Jesus Christ—which has been feature of the annual Lenten TV program “Siete Palabras” since 2012—is a notable community practice of Filipinos across the centuries.

According to Regalado Trota Jose, former commissioner of the National Commission for Culture and the Arts, the chanting of the “Pasyon” was originally done by Filipinos when a member of the community was about to die.

“The belief was that when a person was dying, his soul could be stolen by the devil,” Jose said. “With the ritual of chanting pasyon, the dying was supported by the community in his struggle against evil.”

“Filipinos do not leave anyone alone, even until death,” he said.

Jose, also the archivist of the University of Santo Tomas, underscored that in history the recital of the passion of the Christ was used in spreading Christianity. But Filipinos have made the practice as their very own.

“If we are to observe how the Pabasa is done in various regions of the country, we will see how they are distinct from each other,” Jose said.

He explained that the manner how the different groups of Filipinos chant the Pasyon can be traced from how they had traditionally recited the indigenous epic in their region.

This year, “Siete Palabras” will be participated in by chanters from Bulacan.

Organized yearly by the Philippine Dominican Province and held  at the historic Santo Domingo Church in Quezon City, declared a National Cultural Treasure by the National Museum, “Siete Palabras” will air live on GMA 7 on Good Friday, April 18, 12 noon  to 3 p.m.

“Siete Palabras” will also be heard on Radyo Veritas 846.

Live online streaming will be via www.opphil.org.

For the first time in its history, “Siete Palabras” will have a radio personality and a diocesan priest as preachers of the Seven Last Words of the Christ.

According to Fr. Christopher Jeffrey Aytona, OP, assistant director of the Dominican Province of the Philippines’ Institute of Preaching,  the inclusion of non-Dominican priests in the traditional event is in consonance with the declaration by the Church of 2014 as the Year of the Laity.

“We acknowledge that not only Dominican friars can preach the Siete Palabras,” said Aytona. “This year, we have a radio anchor, who is lay, and a diocesan priest to reflect on two of the Last Words.”

Aytona added that the laity are important members of the Church, noting that the first Filipino saints are lay people: San Lorenzo Ruiz and San Pedro Calungsod.

This year, radio celebrity Jun “Dr. Love” Banaag of DZMM will give his reflections on the Fifth Word: “I Thirst” (John 19:28). He is a member of the so-called Third Order of lay Dominicans.

Meanwhile, Fr. Carmelo Arada of the Most Holy Trinity Parish in Balik-Balik, a secular priest of the Archdiocese of Manila, will preach on the Fourth Word: “Woman, behold your son: behold your mother” (John 19:26-27).

Father Arada is a member of the Dominican Clerical Fraternity, an association of secular priests observing the Dominican charism.

“We are involving other sectors of the Dominican family in our activities as we are preparing for the 800th anniversary of the Order in 2016,” Aytona said.

Lingayen-Dagupan Archbishop Socrates Villegas, president of the Catholic Bishops Conference of the Philippines, will give a special message.

Complementing the reflections are testimonials of faith from broadcast journalist Love Añover, who will talk about how she survived Supertyphoon “Yolanda” (international name Haiyan) by taking refuge at the Palo Cathedral; University of Santo Tomas College of Education dean Clotilde Arcanghel, about her education in faith; and couple Marcelino and Leah Ocampo, about forgiveness and compassion.

The Dominicans started to be involved in the broadcast of “Siete Palabras” in 1984 when Fr. Sonny Ramirez, OP, mounted it on his televsion program, “Sharing in the City.”

In 1995, “Siete Palabras” began to be held at the Santo Domingo Church. And since 1998, the Philippine Dominican Province has been the sole producer. Today, “Siete Palabras” has become the longest-running Lenten program on television.