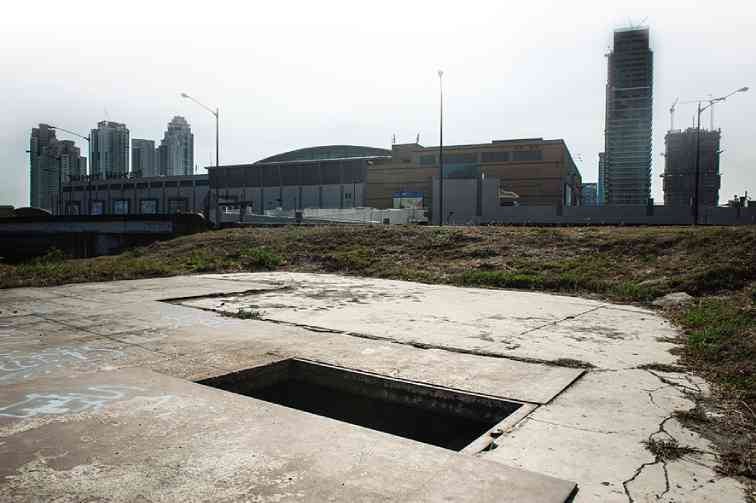 TUNNEL entrance is near amall in Bonifacio Global City. This was once an attraction of the old Philippine Army museum.

While most heritage advocates push for adaptive reuse of important structures, an exit of the historic Fort Bonifacio War Tunnel was recently discovered to have been “converted” and “reused” into a septic tank.

Constructed in 1941 as a bomb shelter on orders of General Douglas McArthur, the Fort Bonifacio tunnel was expanded by the Japanese invaders.

“Wow, really?” said Marion Mamuag, head of the technical working group of the Bases Conversion Development Authority (BCDA)-initiated Fort Bonifacio Rehabilitation Project when he was informed of the Inquirer of the unauthorized conversion of the exit located on 27th Avenue/Road 4 in Pembo, Makati.

The conversion was discovered by this writer when he was making a conservation management plan for the Fort Bonifacio tunnel as a class requirement for his Master of Arts in Cultural Heritage Studies program at the University of Santo Tomas under professor Eric Zerrudo, former director of the Metropolitan Museum of Manila and Government Service Insurance System Museum.

It was learned that a family of informal settlers started to live in the immediate area of the exit a few years ago. They said they built a shanty at the tunnel opening.

The settlers then started covering the tunnel with sheets of galvanized iron supported by mounds of soil. A plastic pipework now runs from the house of the original settler to the covered exit of the tunnel, which is now serving as a sewage channel.

Regalado Trota  José, former commissioner of the National Commission for Culture and the Arts, said the conversion of the tunnel into a septic tank was an act of disrespect.

He said he was not surprised that the historic tunnel had been debased under the very noses of authorities since many in government don’t seem to have respect for history or heritage.

José said the BCDA in 1995 demolished the Philippine Army Museum that used to stand at the entrance of the tunnel. He said the museum itself was erected on the same site where the wooden building housing the historic Mutual Defense Board had been demolished.

José said he and Zerrudo had helped the Philippine Army set up the museum. In fact, one of the main features of the museum was the tunnel’s entrance, he added.

Pembo barangay captain Jeline Olfato said she had spoken to the informal settlers.

But Trixie Angeles, legal counsel of the NCCA, said she’s not certain which between the local government and the military has jurisdiction over the tunnel.

The exit at 27th Avenue is one of three existing exits, which are all located in Pembo barangay. The other two are on Amapola and Morning Glory Streets.

The latter is going to be developed by the barangay as a tourist site to promote the historic value of the tunnel, said village officials. They said they’re coordinating with the BCDA.

Meanwhile, the Amapola Street exit has been blocked by the owner of the lot fronting it. It could not be determined who gave the owner the authority to block the exit, which is big enough to accommodate a six-by-six truck. Residents said the tunnel exit was used once as location for a Hollywood film.

NCCA lawyer Angeles said she could not understand how somebody could claim ownership of the Amapola Street exit.

“The question is how could a title have been issued since a tunnel, especially a military assigned property, unequivocally belongs to the state,” said Angeles.

Mamuag and Olfato said they also could not understand how somebody could have acquired a title to the tunnel’s exit.

A memorandum of agreement was signed last year between the BCDA, National Historical Commission of the Philippines, National Museum, and Tourism Infrastructure and Enterprise Zone Authority  for the development of the tunnel into a museum and a historical site.

The tunnel is a presumed Important Cultural Property under Republic Act 10066 or the National Cultural Heritage Act of 2009 since it is more than 50 years old.

Mamuag said BCDA is pushing for the declaration of the tunnel as a historical landmark.

Phase one, according to Mamuag, will also reveal all possible entrances and exits because of the extensive survey that will be undertaken.

The officials of Pembo said they are waiting for the results of the study so they can continue with their  development plan of the Morning Glory exit.

“Once the detailed engineering design and rehabilitation study is done, it will be used as standard by Pembo in developing the exit,” said Mamuag.

Plans are also underway for the redevelopment of the two other exits.

In 1941, McArthur ordered the construction of the Fort Bonifacio War Tunnel as an underground bomb shelter. Col. Wendell Fertig was the contractor. Filipinos took part in the construction.

The tunnel had been planned to become the headquarters of the United States Army Forces in the Far East  in the event of war. But two months into the project, the Japanese forces bombed Manila, including Fort McKinley.

The tunnel was subsequently used and expanded by the Japanese. In an interesting turn of events, Gen. Tomoyuki Yamashita was said to have sought refuge inside during the liberation of Manila in October 1944.

Col. Gregorio Honasan reportedly hid in the tunnel during the aborted coup attempts against President Corazon Aquino in the late 1980’s.

Of the original tunnel’s length of 2.24 kilometers, only 730 meters remain intact. Much of its length has been lost to the commercial developments in the area.