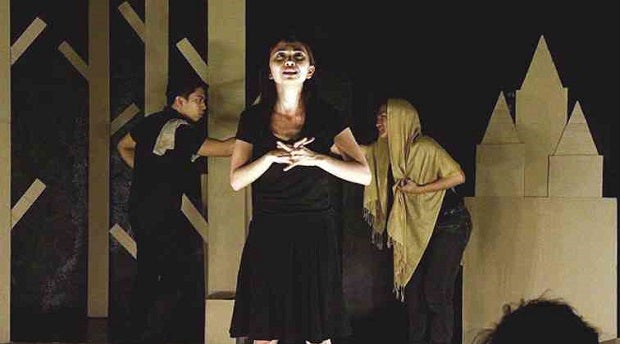 Remember that story about the fair-skinned, virginal girl with the evil stepmother whose talking mirror has dreams of becoming a Miss Universe pageant judge? How about the one with the girl in supposedly eternal sleep, who can be awakened only by the kiss of a stranger? And the farm boy who scales a beanstalk and earns the ire of a giant apparently living in the stratosphere?

Familiar tales, all of them, even as the current generation’s ever-increasing reliance on 21st-century gadgetry threatens to wipe the trusty, hardbound storybook off the map.

But how about the tale of the children ruined by their own home—a story, it should be noted, without the sanitized, glamorized Disney happy ending?

Such is the conceit of “Games People Play,” a tender, oftentimes hilarious, ultimately disturbing account of the many ways family and environment can horribly twist the process of growing up for a child.

“Games are not supposed to be boring,” one character proclaims, and as directed by Ed Lacson Jr., this Palanca-winning play by Glenn Sevilla Mas has been transformed into an electrifying example of simplicity as power onstage. (It ends the fifth of its unjustly brief runs Saturday night at the Ateneo Blackbox Theater.)

The stage is essentially bare. Cardboard cutouts of a castle, a church façade, and trees are the only design elements, set against a stark blackness that works like an invitation to the audience to fill all that space with imagination.

The lighting design is a testament to this production’s inventiveness. “Games” does not make use of any of the theater’s available implements—apparently the challenge imposed on Lacson during his directing finals for his Master’s degree at the University of the Philippines Diliman last year, when this production was first seen.

All the better, then, to highlight the achingly beautiful storytelling that is this play’s most potent feature, set to music by Teresa Barrozo.

Mas, a native of Antique province, weaves snippets of world-famous fairy tales by the Brothers Grimm into the story of three children growing up in an unspecified rural Visayan town. Here, the establishment of context is first-rate, as Mas infuses the play with a distinctly provincial feel. The school festival with an emcee speaking in English rife with mispronunciations is spot-on.

Games that define childhood in wide open spaces under the sun are used as devices to signify and explore chapters in the characters’ lives, which makes for a rather unconventional, nonlinear plot.

Julio is the archetypal confused boy on the verge of discovering his sexual identity; Luna is the innocent girl with a drunkard father and a mother who prays to a hundred saints every day and has sex with her husband twice a year; and Diego is the typical rough-playing boy, except that he struggles with parental neglect and abandonment issues.

“Games” tracks the lives of these friends from childhood to the fringes of early puberty. It’s a coming-of-age story in this way, but one defined by an atmosphere of awkwardness and sadness masquerading as humor.

Witness Diego, prior to a game of bahay-bahayan, laughingly deliver what may perhaps go down as the year’s most heartbreaking line: “I played tatay, and I didn’t know how to play one because I never had one.”

The second act, in particular, can almost pass for a treatise on sexual repression as a poison that lasts into adulthood, exemplified by that perfectly staged final scene, where the characters meet again in their late-20s and find themselves still unable to express their innermost selves.

Centuries-old social constructs, too, are presented, then covertly challenged. The enduring notions on masculinity, for example, are capsulized by Julio’s mother telling her secretly gay son, “Boys need to go out and sweat; that’s how to develop muscles.”

The subtlety with which these issues are treated is admirable, thanks in part to its seen-from-the-eyes-of-a-child perspective. Age the characters a bit more, and it becomes quite irresistible to call “Games” a “Spring Awakening” for provincial Pinoy puberty.

The three actors—Kalil Almonte as Diego, Abner Delina Jr. as Julio and Thea Yrastorza as Luna—beguilingly inhabit their roles, convincingly playing kids without the jarring effect that usually comes with adults pretending to be 6-year-olds.

They speak the mostly English dialogue with a Hiligaynon accent—an artistic decision that came up only during rehearsals, we heard. They also portray a myriad of other roles. Almonte, in particular, gives a delicious “doble-kara” performance of Julio’s two sisters, the brassy one and the catatonic one, rapidly alternating between the two characters during a particular scene, while Delina provides a riotous portrayal of Luna’s outrageously prayerful mother.

On occasion, “Games” strays into far-too-literary ground. “Playing marbles has become predictable,” mumbles Diego—and off the bat, you wonder: Are children ever this eloquent?

Maybe, if reared through the proper means. This play, after all, is also about a balancing act—brash sexuality vis-à-vis gentle, child-like fragility.

In this sense, “Games” tries to pass itself off as merely a cautionary fairy tale, even though it really is a tragedy—and in the hands of Lacson and his team, a magnificent, marvelously realized one.