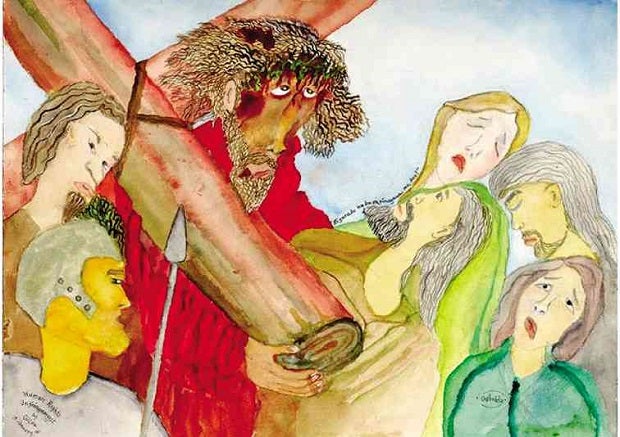 My youngest son, Arcus, City Bank executive, was going to be one of the Apostles in the Maunday Thursday ritual of the Washing of the Feet at Mount Carmel Church, New Manila. I had never been to a Holy Week church affair that didn’t bore me to death, but I was in my wheelchair, and sure of a seat, so I went.

The entire ritual awed me. I had not experienced such solemnity and splendor since my childhood. It was a High Mass with clouds of incense, a full chorus of soaring voices and loud wooden clappers sounding at the appropriate times. A dozen priests, four golden communion chalices—drama in the highest!

Twelve chosen guys were Apostles, but they were not in the colorful costumes that I remembered from older Washings, they were in executive barong! (My son even had a pedicure!) A priest poured water gingerly on the right foot of each apostle and another wiped it with an immaculate towel. (No magic.)

I had been to many Holy Week rituals in my life, dragging my children, and later some grandchildren. I wanted to familiarize them with our folk rituals so that they would love being Filipino.

There was the Angono Easter Sunday salubong where you had to be in the square by 5 am or miss the ritual. High above us, four huge paper birds on bamboo frames swooped down on strings to the center where a gigantic paper flower was situated. The petals opened to lower an angel (a little girl bound to a chair). Her job was to lift the black veil covering the grieving Mother so that she could behold her Resurrected Son. One year, a child who had probably been put in the paper flower too early just couldn’t help wet the people below.

The highlight of this event was having breakfast at Porfirio Vocalan’s bamboo restaurant with very fresh kanduli, burong hipon and other Angono specialties. The place had a pair of papier-mâché giants and a lot of colorful naïve sculptures in clay as a decoration.

My kids must have witnessed every ritual in Bulacan, Pampanga, Quezon, Batangas and eventually most of Luzon. Laguna had the goriest penitencia in Lumbang, shirtless penitents rolling on the sweltering stony road. Later on, they cut their backs with razor blades and beat themselves with multiple whiplashes with sharp objects tied to the tips until their backs were covered with blood.

My children got so used to watching them that they paid no heed if a drop of blood strayed in their direction. Wendy just kept trying to weave palaspas, young coconut leaves, into the shape of birds, flowers stars or balls by imitating the local kids.

Good Friday was circumcision day for prepubescent males. Each boy laid his penis on a smooth T-shaped branch stuck into the earth like an anvil. The herbolario expertly peeled off the organ’s prepuce with a knife, spitting the juice of the guava leaves he was chewing on the wound as antiseptic. While the wound healed the boy, had to wear a sister’s skirt.

We didn’t relish the crucifixions in Pampanga because they were held at noontime in the middle of a sweltering rice field with no trees. One female was crucified along with two males. Her name was Lucy. The palms of her hands were nailed. Her wrists were tied to the cross’ bow. There was a little stool below the cross on which she stood.

Lucy wore a long abaca wig with potencias (golden metal rays) stuck into it. She had on a velvet maroon skirt that seemed like an altar vestment. She didn’t look very inspiring to me, but while the male Cristos hung there unattended Lucy’s fans never left her.

The tinieblas on the death of Christ took place in churches on Good Friday. At 3 o’clock every door of the church was closed, all the lights turned off and the candles extinguished. The wooden clappers clattered as loudly as possible, I suppose, to imitate the death rattle of Christ. It was a ritual that raised the hackles of children and adults alike.

In the carving town of Paete, Laguna, we witnessed the “moving” saints of the carrosa in the Good Friday evening procession. The statue’s limbs were controlled by a sort of puppeteer hidden among the decorations on the carrosa. Sometimes the guy made a grave mistake by pulling the string too hard and Veronica, instead of wiping the face of Christ, slapped him. Oh well.

Dietary church laws have had culinary repercussions. Though the Philippines is a

basically fish-eating country, church tradition ordered the Lenten fasting/abstinence from meat. The sacrifice was to eat only fish, preferably cod, which was cheap in Spain.

In the Philippines, though, codfish or bacalao is one of the most expensive dishes to make. Cod is imported, and so are all its ingredients like olive oil and green olives. And so it was for a long time the most luxurious abstinence dish in a tropical Catholic country.

The sinakulo, dramatized scenes from the life of Christ, were our favorite. They were then held in any available space, on stages that were temporary. In Parañaque, sinakulo were held by fisherfolk on the seashore. We sat on the sand or on the beached boats which were overturned or on their outriggers.

In Cainta, Rizal, we were thrilled to locate the stocky fellow who welded our water tank and our gate, as a participant. He was Simon of Cyrene who helped Jesus carry the Cross. Mang Eddie’s skin was as dark as the bottom of a pot.

The fellow was the son of a sepoy, a Filipino of Indian descent, the fruit of intermarriages during the brief 1762-64 British Occupation of the Philippines. When the British withdrew, many of the sepoy (army privates) mutinied and refused to leave. They took Filipino brides and settled in Cainta where they produced those dusky descendants. There are still many dark residents in that Rizal area.

In time the sinakulo stages became permanent structures complete with theatrical lightning, backdrops, elaborate props and costumes, with less naive acting and also less charm. But our fond memories remain with the “bestest,” blackest Simon of Cyrene of all.

For a decade now, I have not investigated which of the old rituals is still alive in which area. Maybe I am afraid to ask if any grandchild would like to come with me. The volunteer may just be agreeing to it as a Holy Week penance.